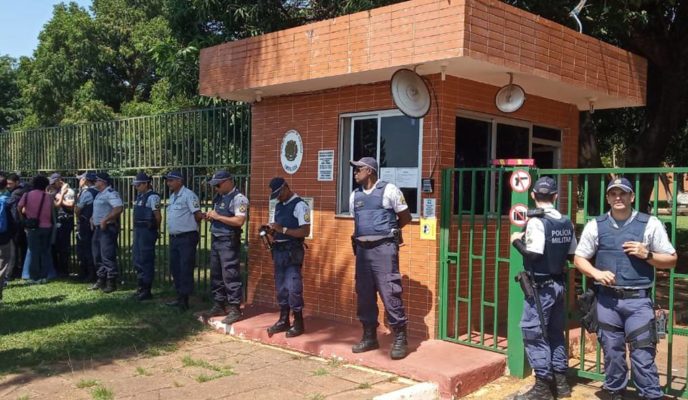 The Brazilian Ministry of Foreign Affairs has ordered the expulsion of Venezuelan diplomats from that country’s embassy in Brasília, and withdrew its own diplomats from Caracas; the move comes after several public altercations which followed Brazil’s support to self-proclaimed interim president Juan Guaidó. Several Brazilian legislators are trying to make stalking a crime in Brazil’s Penal Code, after several bills regulating the issue were sent to Congress. President Jair Bolsonaro will travel to Miami, Florida, where he will attend, along with several members of his cabinet, several business meetings, and visit United States Southern Command military installations. The Argentinian company which had won the bidding process to manage Natal’s international airport has returned the concession to the federal government, blaming Brazil’s economic crisis for a negative impact on the number of passengers; a new bidding process will eventually be held. Finally, presidents Putin and Erdoğan have met in Moscow to try to put an end to the increasing tensions between Russia and Turkey, which are supporting different sides in the Syrian civil war.

The Brazilian Ministry of Foreign Affairs has begun to implement a plan to bring home its diplomats from Venezuela, and presented to the Venezuelan embassy in Brasília a formal request for the expulsion of all representatives of dictator Nicolás Maduro’s government. No Brazilian diplomat or embassy employee will remain in Caracas, and the way any support is to be provided for any Brazilian citizen in need on Venezuelan soil is still being studied. The measure had been expected since the Brazilian government expressed its support for Juan Guaidó’s claim as interim president of Venezuela, but became inevitable after recent criticism and threats made by Maduro to both Brazil and president Jair Bolsonaro.

Stalking may become a crime in Brazil

According to Black’s Law, the most widely used law dictionary in the United States, stalking is “the act or an instance of following another by stealth or the offense of following or loitering near another, often surreptitiously, with the purpose of annoying or harassing that person or committing a further crime such as assault or battery”. The offense may finally become officially a crime in Brazil, after over a dozen bills have been presented over the last decade to Congress. Despite several differences in terminology, all bills have in common the intent of preventing reiterated harassment of others, whether physically or through the internet. Authors of these bills are now campaigning to change the country’s Penal Code.

Bolsonaro to visit US military installations in Miami

Brazilian president Jair Bolsonaro and several members of his cabinet will begin on Saturday a four-day trip to Miami. On the agenda are several meetings with American politicians and businessmen, as well as visits to the military installations of the Southern Command, the unit of the United States Armed Forces responsible for security cooperation and operations in Central and South America. A meeting between Bolsonaro and US president Donald Trump has been scheduled. The Brazilian head of state will also attend private events on his first evening on US soil.

Argentinian company Inframerica, one of the largest airport operators in the world, announced on Thursday its decision to return to the Brazilian government the concession of the São Gonçalo do Amarante Airport, in Natal, capital of Rio Grande do Norte. The Brazilian Ministry of Infrastructure released a statement calling the decision “a natural market movement”. One of the reasons presented by the company was the negative impact imposed on the passenger flow by the Brazilian economic crisis. The airport was the first one to be handed to the private sector, and the government announced it will take over its operations until a new bidding process with private companies is held.

Yesterday, Turkish president Recep Tayyip Erdoğan met his Russian counterpart Vladimir Putin in Moscow in order to find a solution to the recent conflicts between troops from both nations in Syria, where they are supporting different sides in that Middle Eastern country’s civil war. The meeting was held after dozens of Turkish soldiers were killed in the latest weeks in the region of Idlib, the last stronghold controlled by jihadist rebels in northeastern Syria, where they are being supported by Turkey’s armed forces against the troops of the regime of dictator Bashar al-Assad – who has relied on airstrikes by the Russian Air Force. The conflict has caused a humanitarian catastrophe, and nearly a million refugees have fled into Turkey.