Fale a língua do mundo. Faça Wise Up.
Fri 05 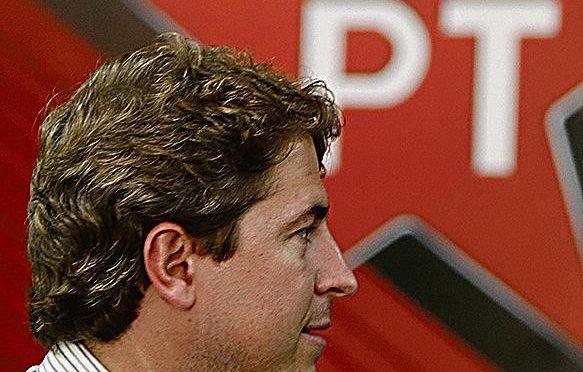 No one in this country has been more of a “tchutchuca” to the billionaires and powerful people than the party to which Zeca Dirceu belongs, which stayed in power for 14 years, five months and 12 days

An argument between Economy minister Paulo Guedes and federal deputy Zeca Dirceu (PT-PR) led to an early closing of the hearing in the Constitution and Justice Committee of the Lower Chamber on Wednesday (3) evening. The goal was to discuss the social security reform bill proposed by the Bolsonaro government.

The conflict happened when the Workers’ Party (PT) politician claimed the minister acts as a “big tiger” when facing pensioners, elderly, and poor people, but as a “tchutchuca” when it comes to “the most privileged people in our country,” in a reference to a popular song by Brazilian funk band Bonde do Tigrão.

There is a problem in the analysis made by Zeca Dirceu: to adopt the same abhorrent term used by him, no one in this country has been more of a “tchutchuca” to the billionaires and powerful people than the party to which Zeca Dirceu belongs, which stayed in power for 14 years, five months and 12 days. There have been several income transfer programs towards the rich conducted by leaders of the Workers’ Party while they were occupying the Planalto Palace.

The criticism directed to Guedes is basically the product of a lack of knowledge about the urgency of reforming the social security system, and who it will affect, since the burden has falsely been attributed on lower-income Brazilians. It is estimated that in ten years it might generate an economy of R$ 1.1 trillion. It just so happens that every penny spent by the government is funded by taxation, whether through taxes themselves, public debt, or the emission of currency. By saving money through an adjustment in its social security system, the government is trying to balance the public expenses. The federal government hasn’t been able to obtain a primary surplus – when the government spends less than what it collects in taxes – since 2014.

The current social security system is not only unsustainable, it is also unfair: only 3 percent of all social security expenses go to the 20 percent poorer, while 41 percent goes to the 20 percent of Brazilians who earn a higher income. While the Bolsa Família program costs annually around R$ 30 billion, and helps 46 million people, the hole in rural pensions is currently at R$ 110 billion, destined to just 9 million beneficiaries. The more timid the adjustment, the more the poor will be harmed, since maintaining the status quo affects them negatively.

Still, even if indirectly, approving the social security reform is what will most benefit the poorer: not only it will fight inequalities, but it is essential for a more vigorous recovery of the economy. Without an adjustment, there will be less growth, as well as an increase in interest rates and taxes.

According to a survey done Felippe Hermes, from the Spotniks website, during the Lula administration government expenses rose in 2.4 percent of the GDP. However, only 0.05 percent of that went to health, 0.2 percent went to education, and more than half, 1.37 percent, to social security. Such an increase in expenses is the result of delaying the reform. The way it has been done currently, spending on pensions and retirements are eating away other slices of the budget.

Beyond the fake narratives defended by the party, we’ve selected four main occasions in which the Workers’ Party has played the “tchutchuca” of the powerful, and you paid for everything.

The strategy, idealized by economist Luciano Coutinho, but embraced by Lula and, subsequently, by Dilma, was to choose specific companies so they could become giants in their sectors and compete in the international market. And all that was being boosted by loans made by the BNDES (Brazilian Bank of Economic and Social Development).

Interests were subsidized. Companies who weren’t friends with the government had to compete by paying higher interest rates demanded by the market. Many of the loans were made using negative interest rates; in other words, the rate of the amounts returned was lower than the inflation during the period.

In a period of nine years, between May 2007 and May 2016, the BNDES account closed at R$ 1.2 trillion, an amount equivalent to 40 times the current budget of the Bolsa Família program – predicted at R$ 30 billion in 2019. That amount was usually destined to friendly companies, such as packing plant JBS, telephone company Oi, and Eike Batista’s oil company OGX. The ex-presidents also contributed with R$ 13.6 billion so that Brazilian contractors could do construction works in countries at Africa and Latin America. That amount is equivalent to 93 percent of what has been paid by the state-owned bank for the export of goods and services. Odebrecht alone pocketed 64 percent of the total.

It was the height of crony capitalism – a system made through the creation of alliances and commercial entanglements established between private groups and the government, in the definition made by Insper professor Sérgio Lazzarini.

The expenses made with this credit party were higher than what was spent with the Marshall Plan, which the US-financed to help with the reconstruction of Europe after the Second World War.

In 2009, then-president Lula said, during a meeting of African nations, that “we cannot have any prejudices against non-democratic countries.” It is no wonder that, while his party was in charge of the executive, billions in taxes extracted from Brazilian workers were transferred to dictatorships.

Many of these contracts remain sealed in black boxes to this day. Several infrastructure works, like highways, railways, and airports, especially in African and Latin American countries, were built. According to O Globo newspaper, such loans caused an annual loss of R$ 1.1 billion to Brazilian workers, since they were financed by funds from FAT, a fund partially financed by salaries of every Brazilian worker.

According to investigations made by Operation Car Wash, the biggest contractors in the country have formed a cartel and split the construction works each of them would be awarded along with Petrobrás. Everything under the command of the Workers’ Party (PT), but also favored by MDB and PP. In the midst of all that, companies like Odebrecht and OAS, as well as Camargo Corrêa and Andrade Gutierrez, have been amply benefitted by the PT government – even though there were several others involved – and paid back with enormous amounts of money in bribery.

Odebrecht, for instance, returned the favor transferring R$ 324 million in briberies, on the course of five years, to PT, according to state’s evidence. Among the main favors received by the company were credit extension for exports to Angola, and the approval of a fiscal recovery provisional measure.

Regarding OAS, Lula peddled his influence for the construction company abroad. The company wished to increase its business in countries like Peru, Chile, Costa Rica, Bolivia, Uruguay, and several African nations. Lula readily helped them and, in retribution, had renovation works done at his Atibaia ranch and his Guarujá triplex apartment, for which Lula is now serving a jail sentence. Besides, OAS paid R$ 215 million in bribery money to his party.

The Andrade Gutierrez Group made several donations to PT in exchange of receiving favors in contracts with state-owned companies. Among the accusations, it provided R$ 6.1 million in funds for the election campaign of president Dilma Rousseff in 2010, as well as another R$ 10 million for her reelection campaign in 2014. It is estimated that half of the R$ 100 million the company ‘donated’ to the Workers’ Party were a form of bribery.

According to state’s evidence turned by Antônio Palocci, both Lula’s and Dilma’s strong man, at least 900 of the 1,000 provisional presidential decrees (MP) issued during the four Workers’ Party administrations were motivated by briberies.

Even though there is an imprecision in the information – the Workers’ Party issued 623 provisional decrees – and the state’s evidence are still being discussed in courts, there is strong evidence that some of these provisional decrees involved illicit negotiations to insert specific contents which benefitted some private groups. Among them, two are being targeted by penal lawsuits, such as MP 627, from 2013, which extended tax breaks destined to automobile assembly plants, as well as MP 471, from 2009, which also benefitted assembly plants by extending their tax breaks. Automobile manufacturers Mitsubishi and CAOA are involved, and are currently on trial due to their involvement in the penal lawsuit which investigates the case.