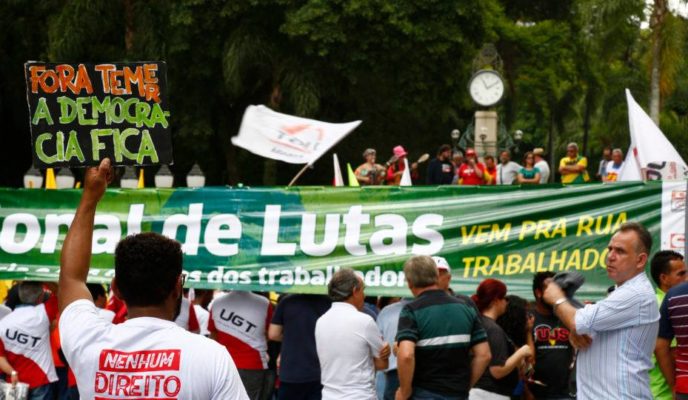 A nationwide general strike has been called by labor unions and opposition parties to protest against the Social Security Reform. The strike is expected to affect essential services such as public schools and public transportation. Justice minister Sergio Moro claims that the publication of his private conversations with members of the Operation Car Wash taskforce aims at freeing former president Lula from jail. Excerpts from the conversations, published by news website The Intercept Brasil, have been causing controversy. The UK government will be testing ‘noise cameras’ in order to try to curb sound pollution in the country’s streets and highways. The US has increased the number of troops in one of its main European allies, Poland; the move has been viewed with suspicion by the Russian government, which in its turn is sending more troops to the occupied territory of Crimea. Finally, a survey in the United States has found out that natural fruit juices may pose the same health risks to the human body as soft drinks.

General strike affects cities all over the country

Led by several labor unions and workers’ movements, as well as some opposition parties, more than 170 municipalities all over Brazil were hit by a general strike to protest against the Social Security Reform. Protests have been scheduled in all major capitals. In several cities, public transportation was affected, despite preliminary decisions by the courts which prohibited essential services, such as buses and subways, from adhering to the strike. Public schools were also shut down, as well as some private ones; several professional categories, such as bank tellers and public servants, did not work today as well.

In an interview with O Estado de S. Paulo published today, Justice and Public Safety minister Sergio Moro claims the aim of those who published conversations between him and members of the Operation Car Wash taskforce is to take former president Lula out of jail. He claimed he did not recognize the dialogues published by news website The Intercept Brasil, and said that there could have been some “malicious insertions” in excerpts from those conversations. He challenged the editors of the website to release the whole content to the Federal Supreme Court, and said he has the support of president Jair Bolsonaro.

‘Noise cameras’ will be tested to curb sound pollution

Cars equipped with loud stereo systems or which had their engines souped-up to make more noise are a constant nuisance to other people. With that in mind, the British government will begin testing a new device in order to curb sound pollution: the so-called ‘noise cameras’. According to Transport Secretary Chris Grayling, “noise pollution makes the lives of people in communities across Britain an absolute misery and has very serious health impacts. This is why I am determined to crack down on the nuisance drivers who blight our streets.” The equipment will be set up next to speed cameras and will automatically detect noises which exceed 90 decibels.

US increases number of troops in Poland, and Russia increases its arsenal in Crimea

Russian Deputy Foreign Minister Sergey Ryabkov has expressed his country’s concern with the recent decision made by US president Donald Trump of increasing the number of troops in Poland. During a visit by Polish president Andrzej Duda to the White House, Trump said he will send a fleet of drones to join the 4,500 soldiers already in the country. Russia, on the other hand, has been sending troops, planes, and weapons to the Crimean Peninsula, increasing tensions with its Ukrainian neighbors. President Vladimir Putin said in an interview that Russia-US relations are “getting worse and worse.”

A study released by US scientific publication Journal of American Medical Association detected that the impact of 100 percent fruit juices on the health is similar to that of sugary drinks such as soft drinks, iced teas, and commercial boxed juices. The survey, conducted in the United States with more than 12 thousand adults over the age of 45, determined that for every 350 ml of fruit juice there was an increase in the risk of death from all causes among people in that age group. According to researchers, nutrients which make up natural juices and soft drinks are similar, even though 100 percent fruit juices may contain additional vitamins and phytonutrients.