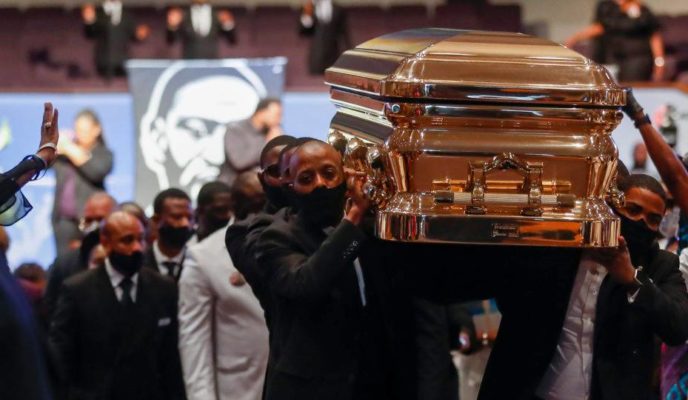 George Floyd, the black man whose murder after being choked to death by a white police officer sparked a wave of anti-racism protests all over the United States and several other countries, was buried today, after an emotion-filled funeral ceremony. The Brazilian government has announced it will use the two million hydroxychloroquine pills donated by the United States government to try to prevent health professionals from contracting COVID-19, even though the prophylactic use of the drug is yet to be confirmed by science. President Jair Bolsonaro has expressed his intentions of following in the footsteps of his US counterpart, Donald Trump, who recently cut off all funding towards the World Health Organization, and said that Brazil could leave the organization. The Brazilian Federal Police are executing several search and seizure warrants involving the purchase of ventilators without a proper bidding process; among those investigated is Pará state governor Helder Barbalho. Finally, the Swedish police announced that, after 34 years, they have identified the man who allegedly shot down prime minister Olof Palme on a busy Stockholm street.

George Floyd hailed as “cornerstone of a movement” at funeral

George Floyd, the 46-year-old unarmed black man whose death after being choked by a police officer’s knee sparked a series of anti-racism protests and riots throughout the United States, was celebrated by family members, friends, and politicians who attended his funeral today at a church in his hometown, Houston. The ceremony was broadcast through the internet and by several US television stations. Floyd was remembered by his family as a loving person, with a “larger than life” personality; sobbing in grief, his elder brother, Philonise, thanked God for giving him his “own personal Superman.” In his eulogy, Reverend Al Sharpton said Floyd’s life will be a living legacy: “God took the rejected stone and made him the cornerstone of a movement that’s going to change the whole wide world.” After the ceremony, Floyd’s body was buried next to his mother at a private ceremony in Pearland, Texas.

Chloroquine to be used to “prevent” COVID-19 in health workers

The two million hydroxychloroquine pills donated by the United States to Brazil will be partly used to prevent health workers from being contaminated by the novel coronavirus, according to the joint statement signed between both countries. The prophylactic use of the drug, however, goes against medical recommendations from several institutions, including Brazil’s own Ministry of Health. “The HCQ will be used as a prophylactic to help defend Brazil’s nurses, doctors, and health professionals against the virus. It will also be used to treat infected Brazilians,” read a statement issued by the Foreign Ministry. There are currently no studies which prove the effectiveness of chloroquine or hydroxychloroquine in the treatment of COVID-19.

Bolsonaro once again says Brazil may leave the WHO

Brazilian president Jair Bolsonaro has once again said Brazil may follow the example of United States president Donald Trump, and leave the World Health Organization. The statement was given after the end of a cabinet meeting. “These experts, as incredible as it may seem, cannot get anything right,” he said. He added that “the WHO is an organization that is wavering.” Bolsonaro also mentioned the fact that Trump cut off all funding destined to the WHO, and said he is considering doing the same. Brazil currently owes R$ 169 million to the organization.

This morning, the Brazilian Federal Police conducted an operation to investigate frauds in the purchase of ventilators by the government of the state of Pará to treat COVID-19 patients. 23 search and seizure warrants were executed, including in the state government headquarters and in government offices, as well as governor Helder Barbalho’s residence. According to the Federal Police, searches are also being conducted in Rio de Janeiro, Minas Gerais, Santa Catarina, São Paulo, Espírito Santo, and Distrito Federal. According to the corporation, these ventilators were bought without a proper bidding process for R$ 50.4 million, but had to be returned since they were not fit to treat patients infected with the novel coronavirus. The Superior Court of Justice ordered the arrest of R$ 25 million from governor Barbalho’s personal account and seven other suspects.

Today, Swedish prosecutors revealed the name of the man who they believe killed Olof Palme in 1986, who was then the country’s prime minister. Stig Engstrom, a graphic designer known as “Skandia Man” who killed himself in 2000, is believed to have shot Palme in the back as the prime minister returned home from a movie theater with his wife, in the middle of a busy Stockholm street. The prosecutors reached this conclusion after analyzing Engstrom’s statements to the police at the time of the murder; after examining his past life, they found out he had served in the army, was a member of a shooting club, and had problems with gambling and alcohol. People who were close to him also presented a negative outlook on him to the authorities. Ergstrom worked at an insurance company near the murder site, and was present at the scene.