Fale a língua do mundo. Faça Wise Up.
Wed 24 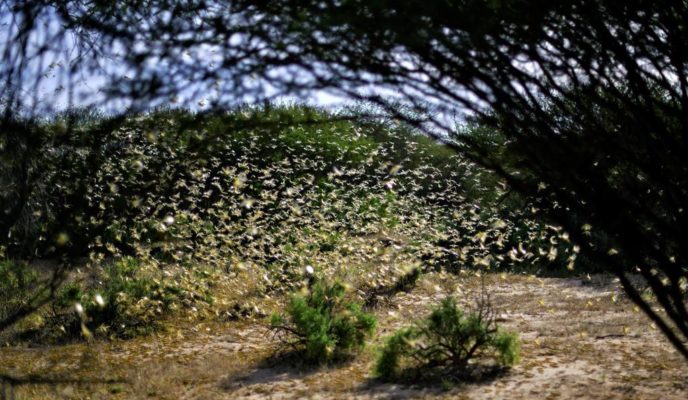 A giant swarm of grasshoppers which took off from Paraguay and is now currently over Argentina may cross the border into Brazilian territory, according to local authorities. Actor Mário Frias was officially sworn-in yesterday as Brazil’s new Secretary of Culture during a closed ceremony held in Brasília. Anti-racism protesters have tried to topple a statue of former US president Andrew Jackson, at a park close to the White House, in Washington D.C.; president Donald Trump reacted by authorizing the arrest of anyone who “vandalizes or destroys” any monuments, statues, or other federal property. A 7.5 magnitude earthquake rocked the southern region of Mexico, causing the evacuation of several buildings throughout the country, including hospitals with COVID-19 patients. Finally, facing one of the worst popularity crises since he has been in power, Russian president Vladimir Putin held a military parade at Moscow’s Red Square, to celebrate the 75th anniversary of the Soviet victory over Nazi Germany in World War II, one week before a referendum which could allow him to remain in office until 2036.

Grasshopper swarm may cross into Brazil from Argentina

Argentinian government authorities informed that on Monday a swarm of grasshoppers was spotted over the province of Corrientes, and may cross into Brazil through the border with the state of Rio Grande do Sul. According to Argentina’s food safety and quality agency, SENASA, the insects have flown towards the south, and reached the province of Entre Ríos. The cloud of grasshoppers is suspected of having taken off from Paraguay, and has been flying over Argentina since last week, wreaking havoc on the country’s corn crops. Although they pose a great threat to local agriculture, they neither cause any harm to humans, nor transmit any diseases.

Brazil’s new Culture secretary, actor Mário Frias, was sworn-in at a closed ceremony held yesterday. Frias, a former soap opera star, is replacing Regina Duarte, a fellow Globo TV actress who left office last month after a brief mandate. In the presence of Tourism minister Marcelo Álvaro Antônio, the actor signed his acceptance term along with joint secretary Pedro José Vilar Godoy Horta. Both were officially appointed for their posts in Friday’s edition of the Federal Gazette. Frias’s appointment has been widely criticized by members of the culture sector in Brazil, due to his complete lack of previous experience.

On Monday evening, anti-racism protesters tried to topple a statue of former United States president Andrew Jackson at a park near the White House in the country’s capital, Washington D.C. After the event, president Donald Trump authorized the federal government to arrest “anyone who vandalizes or destroys any monument, statue or other such Federal property in the U.S.” By the time local police intervened, several people had already tied ropes to the 168-year-old bronze statue and began to pull it. The word “murderer” was spray-painted on the monument, which commemorates the 7th American president.  Law enforcement agents dispersed the crowd using pepper spray and at least two people were arrested for trying to assault an officer. Protesters also tried to barricade Lafayette Park, declaring it the “Black House Autonomous Zone”.

On Tuesday morning, a 7.5 magnitude earthquake was felt in several regions of Mexico, including the capital. So far, the country’s authorities have informed that only one person died due to the quake, in the southern state of Oaxaca. The epicenter was registered 23 kilometers southeast of the city of Crucecita. A tsunami alert was issued to inhabitants of the Pacific coast of Mexico, as well as Guatemala, Honduras, and El Salvador. In Mexico City, an alert caused the evacuation of several buildings, including hospitals; one facility destined for COVID-19 patients suffered structural damages.

The COVID-19 pandemic delayed, but did not prevent Russian president Vladimir Putin from holding his long-awaited military parade to commemorate the 75th anniversary of the victory of the Soviet Union over Germany’s Nazi regime in World War II. Today, over 14 thousand soldiers from 13 countries and 200 military vehicles paraded through the Red Square, in Moscow, escorted by 75 airplanes. This display of power, scheduled initially for May 9th, but postponed due to the novel coronavirus pandemic, was strategically held one week before a referendum which may allow Putin to remain in power until 2036 – at a moment in which the Russian president is appealing to nationalism to deal with a severe popularity crisis.