Fale a língua do mundo. Faça Wise Up.
Tue 11 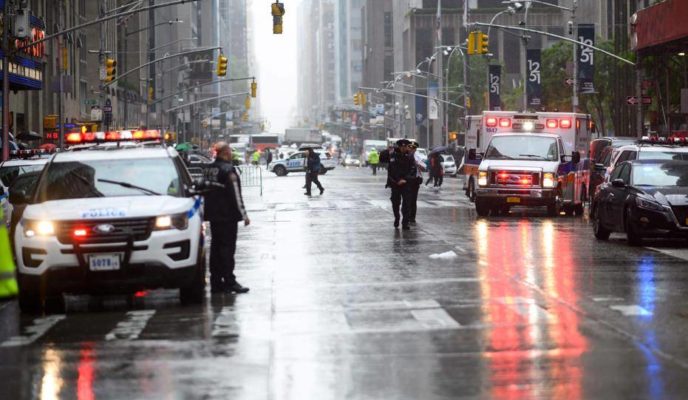 A helicopter crashed into a skyscraper in New York City, after attempting an emergency landing on the roof of the building. The sole victim was the pilot, but firefighters evacuated the site. The Brazilian island of Fernando de Noronha will be the first place in the country to ban fossil fuel-powered vehicles. The local government plans on having only electric-powered cars circulating on the island by 2030. Thousands of girls who are fleeing the North Korean dictatorship to China are being enslaved by criminals and sold into prostitution; when caught by local authorities, they are deported back to their home country, where they face retaliation. The Caribbean nation of Haiti is being rocked by protests demanding the resignation of president Jovenel Moise, accused of receiving illegal money from Venezuelan dictator Nicolás Maduro. Finally, Justice minister Sergio Moro met president Jair Bolsonaro for the first time after private conversations between Moro and members of the Operation Car Wash taskforce were leaked to the press.

Yesterday a helicopter collided with a Manhattan skyscraper on 7th Avenue. According to the New York City Fire Department, the pilot of the aircraft was the sole victim of the accident. The building was evacuated and firefighters quickly went to the scene. According to New York State governor Andrew Cuomo, the helicopter was trying to make an emergency landing on the roof of the skyscraper but burst into flames after the collision. Eyewitnesses said the building shook with the impact. At the time of the incident, moderate to heavy rain was falling in the city, and there was low visibility, but for some reason, the pilot decided to fly.

The island of Fernando de Noronha will be the first place in Brazil to ban carbon dioxide-emitting cars, motorcycles, buses and trucks. The decision will be implemented by the Noronha Carbono Zero program, and will be enforced after August 10th, 2022. Vehicles already on the island will be allowed on the streets, but by 2030 the entire fleet will have to be replaced by clean-energy models. The local government started a partnership with French automobile manufacturer Renault, and received six electricity-powered cars for administrative purposes. A license for the circulation of 130 new electric cars has been issued; this is the maximum number of vehicles allowed on the island.

Girls who fled North Korea are enslaved in China

Thousands of young women from North Korea, including 9-year-old girls, are being enslaved every year in China, where they are forced to work as sex slaves. According to a report by British organization Korea Future Initiative, the exploitation of these women generates at least US$ 105 million every year for Chinese criminals. The victims are forced to work at brothels or sold into abusive marriages; if they are caught by the authorities, they are deported back to North Korea, where deserters are often tortured. It is estimated that at least 200 thousand North Koreans have already fled to China, trying to escape the dictatorship in their home country.

Haiti is rocked by anti-government protests

The Central American nation of Haiti is being rocked by protests demanding the resignation of president Jovenel Moise. On Sunday at least two people died, five were wounded, and twelve were arrested by the police. Members of the Presidential Guard allegedly shot at the crowd which protested in front of the National Palace in the capital of the country, Port-au-Prince. Opposition leaders have called a general strike today, bringing public transportation to a halt and shutting down schools and stores. Shots can be heard all over the city, and barricades have been set up. Moise is being investigated for receiving irregular money from Venezuelan dictator Nicolás Maduro.

Moro meets Bolsonaro for the first time after leaked conversations

Justice and Public Safety minister Sergio Moro met president Jair Bolsonaro today at the Alvorada Palace. This is their first meeting after private conversations between Moro and members of the Operation Car Wash taskforce were leaked to the press. The meeting happened during the ceremony which celebrated the 154th anniversary of the Naval Battle of Riachuelo, in the Paraguayan War. Several members of the government came forward to defend the Justice minister, among them vice-president Hamilton Mourão, who said Moro is someone who enjoys “the utmost trust” of the president.