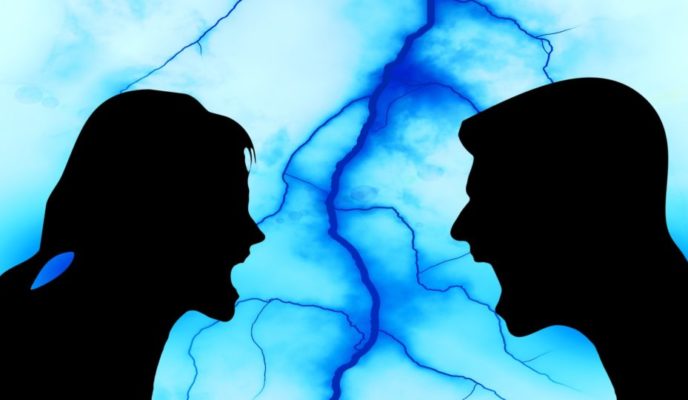 It is George Orwell’s doublethink, manifested day after day, institutionalized not by the state, but by groups seeking power

In a discussion in a social media, former presidential candidate Fernando Haddad made a controversial provocation directed at Rio de Janeiro city councilor Carlos Bolsonaro. In an answer to a post criticizing Jair Bolsonaro’s administration, the president’s son taunted Haddad by writing “Cry lunchbox!!!” (the expression “marmita de bandido” – “inmate lunchbox”, in a free translation – is often used in social media to refer to people who defend someone who has been convicted of a crime, referring to family members or friends who take lunchbox to inmates in jail), to which Haddad answered “Is your little cousin doing well?”. His question derives from speculations that Carlos has a love affair with his cousin, known as Leo Índio (“Indian Leo”).

Catraca Livre, a left-leaning media outlet, rightly criticized the former mayor of São Paulo: “Questioning if ‘the little cousin is doing well’ made Haddad try to put down Carlos Bolsonaro in the debate using the premise that to be gay is something to be ridiculed, […] completely deplorable and unnecessary.”

On the other hand, former PSOL congressman Jean Wyllys, the first one to be elected with the support of the LGBT cause, came out in Haddad’s defense: “To attack Haddad for being ironic with a hypocritical homophobe who thrives on disparaging the proud LGBT community shows a lack of strategy from some in the left, and the hypocrisy among some in the extreme-right.”

The same Jean also attacked in 2011 Clodovil Hernandes, a homosexual ex-congressman, when he said that the former TV host had an “internalized homophobia” because he didn’t carry the LGBT cause’s banners. Because Clodovil opposed affirmative action, migration policies, and the legalization of drugs and abortion, and defended privatizations and the reduction of the age of majority – the exact opposite of the agenda of the Brazilian left – he wasn’t worthy of being shielded by political correctness.

In a similar way, in 2016, José de Abreu was verbally taunted by a Rio de Janeiro lawyer, in a restaurant in São Paulo, due to his political militancy. The actor answered by spitting on him and his wife. Federal congresswoman Maria do Rosário (PT-RS), a women’s right militant and former Human Rights minister, defended the artist.

“They are judging Zé de Abreu for an immediate reaction. People who react to an act of aggression does not plan on how they are going to act, but those who attack do. Respect, and you shall be respected,” said Rosário. The lawyer’s wife, gratuitously assaulted, did not earn the defense of the member of Congress, who militates for women’s rights.

In 2018, former federal congressman Ciro Gomes called São Paulo city councilor and MBL coordinator Fernando Holiday (DEM) an “Uncle Tom”, an expression which caused him to be investigated for the crime of racial insult by the São Paulo Prosecutor’s Office. The expression alludes to a black, poor and free servant, in charge of capturing fugitive slaves, helping therefore to maintain slavery.

The same black movement which asked for a boycott against Ciro Gomes when he opposed the Workers’ Party (PT) in 2002, was divided. For historian Jones Manoel, for instance, Holiday is part of a movement whose political stance reinforces racism. “He is against affirmative action: an important, even if limited, public policy to mitigate racism. In that sense, I believe Ciro Gomes’ criticism is correct.”

The entities representing the black movement, on the other hand, did not even bother commenting on the subject. The question which remains is: what sort of emancipation is this that will not allow an individual to act according to his or her conscience? Having the same color should not mean having the same political inclination and fighting for the same things, in order to have your opinion respect. After all, disrespect for individuality is one of the facets of racism.

Also in 2002, when he ran for president, Ciro was questioned in an interview about the importance of his wife, actress Patrícia Pillar, in his campaign. The politician answered that “her role is to sleep with me.” However, part of the “Ele Não” (“Not Him”) movement, active during the 2018 elections, rightly repudiated Jair Bolsonaro’s sexist statements and ignores others like Ciro Gomes’.

Therefore, despite his posture, his candidacy was endorsed by most feminists during the 2018 electoral race, after the presidential candidate declared that that comment was “the biggest mistake of his life”, and, during the campaign, promised to recreate the Women’s Secretariat and to form a 50 percent feminine government. Just one year earlier, however, when commenting on the pre-candidacy of ex-senator Marina Silva, he claimed the environmentalist lacked “testosterone”. His reiterated violence against minorities was not enough to discourage the support of the politically correct left to him.

While attending the Human Rights and Minorities Commission of the Chamber of Deputies, on March 10 this year, minister Damares Alves praised the beauty of congressman Túlio Gadêlha (PDT-PE), in an informal moment which drew laughs from others members of parliament. The federal deputy, renowned for dating TV host Fátima Bernardes, answered her praise in his social media:

“Tell her that she can forget about Jesus and the guava tree, because there will be no miracles here,” referring to an occasion in which the minister claimed she saw Jesus Christ in a guava tree, while contemplating killing herself due to abuses she suffered during her childhood.

The comment might spark criticism both by its offense against Damares’ religious beliefs as to the inherent sexism in it, but the Parliamentary Front in Defense of Women remained quiet.

There were also no major demonstrations of repudiation directed to philosophy professor Paulo Ghiraldelli when he wished, in 2013, that journalist Rachel Sheherazade was raped.

The amount of similar cases is endless, but there is a clear perception that the left is not feminist, is not against homophobia, and it does not defend black people: it merely creates and sells narratives to obtain political capital, feeding the ideological halter responsible for its occupation of spaces and silencing of dissidents. All on behalf of a project to stay in power. It does not matter what is being said, but who is saying it.

It is George Orwell’s doublethink, manifested day after day, institutionalized not by the state, but by groups seeking power.

The hypocrisy of the politically correct

Gazeta do Povo columnists Guilherme Fiúza and Rodrigo Constantino have similar views regarding whom political correctness is interesting.

“political correctness interests those who want to shut down the debate due to their lack of arguments. It is a veiled, or not so veiled anymore, a form of intimidating the opponent. Then the alleged malignant intentions are labeled – he is racist, sexist, a homophobe, a xenophobe – so they don’t have to reply to what is being said. They attack the messenger, so they don’t have to respond to the message.”

Fiúza criticizes the fact that the agents in charge of defending political correctness seek to “monopolize the virtues”:

“Political correctness was once a form of demagogy. Now it is a sub-demagogy to sell pirate altruism for R$ 1.99 – and it generates millions and millions of dollars, because it has become extremely cheap to become a legalized egotistical. It is market filled with money, votes, news, publicity, and countless powers. The kindness kit gives to its owner the monopoly of virtue against the imaginary fascism (which can be projected onto any mortal who is not wearing the outfits offered by the R$ 1.99 kit).”

Constantino also points out the hypocrisy of political correctness, given its selectiveness:

“It serves to shut up and intimidate humor against the alleged minorities: if it’s against the Christian, white, and straight man, knock yourself out! Political correctness is now one of the main instruments in this march of oppressed minorities, it is the revolution of the victims. And it has nothing to do with the minorities themselves: feminism doesn’t care about Thatcher, the black movement doesn’t care about Holiday.”

Even though the United States is a country that is a reference when it comes to protecting the constitutional right to free speech, it is dominated by a politically correct discourse, which curbs debates. This has become explicit in a case which happened recently involving Minnesota Democrat congressman Ilhan Omar. She minimized the series of terrorist attacks against the United States, coordinated by Al-Qaeda on September 11, 2001, which took the lives of thousands of people, claiming there is a widespread Islamophobia because “some [muslim] people did something”.

The criticism directed to Omar was answered as being “incitements to violence due to the fact that she is a black, progressive, and Muslim woman.”

“One can no longer criticize what has been said. When you say that someone is inciting violence just for criticizing an unfortunate statement, you end up killing any chance of a rational debate,” concludes Constantino.

In an interview to Gazeta do Povo, comedian Danilo Gentili said that “politically correct means that there is a political current that wants you to be correct, but according to their bias. People end up trivializing the term: many people mistake being politically correct for avoiding faux pas or not offending anyone, but that is not what this is all about. Political correctness is about a specific form of political control.” It is as if, in order to be correct, one has to follow these dogmas.

Gentili concludes that “there is no official dictatorship, but an extremely large organism of intimidation, which creates a spiral of silence so that people won’t say certain things.”

US feminist Peggy McIntosh laid down in an article what has become known as the Privilege Theory, which claims such privileges are obtained due to more advantageous socioeconomic aspects established from the birth of an individual.

The origin of the term ‘privilege’ indicates the “law for a few”, that is, a distinction which originated from and was approved by the state. For the professor, however, the privileged benefit from individual advantages that haven’t been granted by the state, and may or may not be seized: those who are born men, white, heterosexual, and rich, are naturally privileged in comparison to women, blacks, gays, and poor people. The former are not oppressed, while those who do not have the same characteristics tend to be their victims.

For political scientist Bruno Garschagen, who addressed the issue in his work “Direitos Máximos, Deveres Mínimos” (“Maximum Rights, Minimum Duties”), this is “a reinforcement of the caricature made by Marxism between rich and poor, oppressors and oppressed.”

Philosopher Joel Pinheiro da Fonseca goes beyond. For him, the application being done in the public debate of McIntosh’s theory to analyze any social process is extremely poor. “Each one of these categories is applied within an individualized context. In a specific circumstance, a black woman may have power and oppress a white man, for instance. Indeed, men usually have more power than women, but it is important to analyze the concrete case and its context, something which is lost when individuals are treated solely based on abstract categories and theories.”

The privilege theory paved the way for the “modern left” to take possession of the discourse of the protection of minorities, and it is the foundation to understand the behavior of this militancy.