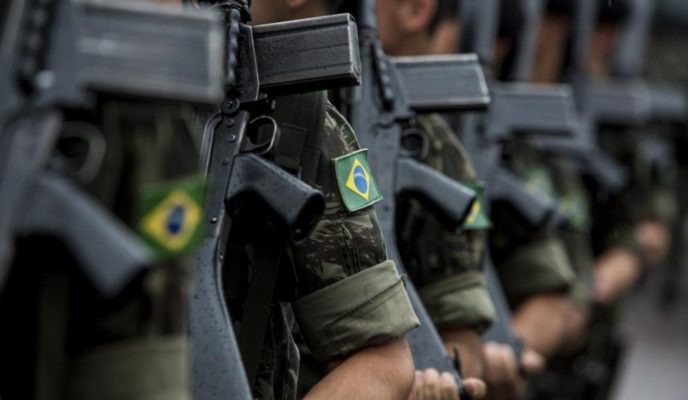 Retirement in the Armed Forces is once again a topic of debate, but there is no consensus even between generals in Bolsonaro’s government. Here are the current rules and its cost for the public coffers

The idea of a social security reform in the military, which had been promised during Temer’s administration but never became a concrete proposal, surfaced once again at the beginning of Bolsonaro’s government.

The retirement rules for the Armed Forces, justified by the peculiarities of the profession, are different from the ones applied to civil servants and employees of the private sector. They allow the member of the military to become inactive earlier than other workers, in most cases at a maximum of 50 years of age, which generates a high cost for the public treasury, much higher than conventional pensions.

A recent survey indicates that most people support changes in this situation. According to Paraná Pesquisas Institute, which heard 2,006 people from December 12 to 15, 58 percent of people interviewed think the members of the military should not have a special social security regime.

But there is no consensus in the government on possible changes in the legislation. While he still supports new retirement rules for the INSS and civilian public servants, president Jair Bolsonaro, who was a captain in the Army, defends a special treatment for members of the Armed Forces.

Generals with high-ranking positions in the government are split on the matter. Vice-president Hamilton Mourão and secretary of Government Santos Cruz admit the need for harsher rules. Mourão defends an increase in service time, from 30 to 35 years. “We cannot accept anymore someone going to the reserve at 48, 49 years of age,” he declared months ago. Following along the same lines, Santos Cruz considers it “inadmissible in today’s world” that workers should retire at “40-something, 50 years of age”, both in the military as well as in other careers.

On the other hand, minister of Defense Fernando Azevedo e Silva said on Tuesday (8) that “military are excluded from that” and that he doesn’t like to discuss the subject because, in his point of view, members of the military do not have social security.

A common thesis defended by those who oppose the reform is that members of the military “do not retire”, since they may be called at any moment after becoming inactive – which is true, but up to a certain point. But sustaining there is no retirement, the Ministry of Defense does not admit that spendings on inactive personnel should be accounted as social security expenses and, therefore, reject assessments which indicate a deficit in the balance between contributions and benefits.

Other arguments used to defend the current legislation are that members of the Armed Forces do not have rights which are guaranteed to other workers, such as the right to strike, unionization, and affiliation to political parties. They also do not receive overtime, night-shift or dangerous work premiums, which, according to calculations made by the Ministry of Defense, generate an economy of over R$ 20 billion per year to the federal government.

Many social security experts agree that, due to the demands of their work, members of the military deserve a different treatment. However, they can see the need for stricter rules, which are compatible to the increase in longevity among the population as a whole, that would make them closer to the rules applied in countries such as the United States and the United Kingdom.

Nowadays, members of the military contribute with at least 7 percent of their pay. Since theoretically, they do not retire, such a discount only serves to pay for the payment of pensions to their families. The controversial lifelong pension paid for daughters of members of the military is only valid for those who joined the career until the year 2000 and accepted to pay an additional contribution of 1.5 percent.

Civil servants, on the other hand, pay to the social security 11 percent of their salaries. One of the suggestions presented to the Bolsonaro government by Michel Temer’s economic team was precisely equating military and civilian tax rates, charging therefore 11 percent from both. The extra money obtained with the measure would be R$ 1.7 billion in the first year alone.

According to the current rules, members of the Armed Forces can become inactive after 30 years of service, regardless of their age, with full pay. Part of that time may be fictitious, since each year worked in border outposts entitles an individual to four extra months in their total time worked. Besides, there are age limits to reach specific posts; if a member of the military does not get promoted in a determined period of time, he is automatically sent to the reserve.

In the meantime, civil servants have to contribute for 30 years (women) or 35 (men), and can only retire after 60 or 65 years of age, respectively. There is no fictitious amount of time in that calculation, and full pensions are only guaranteed to those who joined the civil service until 2003.

In the US and UK armed forces, military pensions are proportional to their service time. A US citizen who served for 30 years, for instance, receives when he becomes inactive the equivalent of 60 percent of his salary; for a UK citizen, the same amount of time entitles him to 43 percent of his pay. Unlike what happens in Brazil, widows and widowers do not receive full pensions.

Until 2001, members of the military were promoted for a higher rank whenever they joined the reserve, which made their inactive benefits higher than their last active pay. That advantage is no longer in effect, but the payment of that sort of full “boosted” pension to those who earned the right to it will still impact public coffers for several decades. The same happens to lifelong pensions for their daughters.

As a result of that set of rules, inactive members of the military or pensioners receive, on average, more than twice those who are still active. In 2017, average monthly values were R$ 10,539 and R$ 4,771, respectively, according to the Ministry of Planning.

Whenever a member of the military leaves active duty, he joins the so-called reserve. In that situation, he may be drafted at any moment, in case the country needs it. In times of peace, such drafts are not usual. The country has now 158 thousand inactive servicemen, but only 250 are drafted per year, on average, according to data from the Ministry of Defense concerning the 2012-2016 period.

But that standby condition does not last their whole lives. After a specific age, which varies from 56 years for regular soldiers to 68 for general officers, the member of the military joins the reform and is dismissed indefinitely. In other words, he retires.

The cost of military social security

As much as it may be justified by the characteristics of the profession, precocious inactivity and full pay for members of the military, added to the benefits paid for pensioners, have a high cost for the public treasury – which, in practice, pay for all that expense.

The total amount of contributions collected from members of the military in 2017 was R$ 3.3 billion, the equivalent of only 8 percent of the total R$ 41 billion expense of the government with 223 thousand pensioners and 158 thousand inactive workers, according to the federal government’s Social Security Secretariat.

The comparison between the revenue obtained by contributions and the spendings on benefits – the same one done to assess INSS results, as well as those of federal civil servants – indicates a R$ 38 billion deficit in the military area in 2017. This is the total amount paid for the National Treasury, i.e., the taxpayers.

The hole in the civil servants’ regime was bigger, totaling R$ 49 billion, but for a higher number of beneficiaries – which is also high – of 737 thousand retired and pensioners. In the INSS, the negative balance in the same year was R$ 182 billion, for a total of little over 34 million insured.

In the division of the total deficit for the number of beneficiaries, the military area has – by far – the biggest hole. R$ 99 thousand per person in 2017, 50 percent more than the civil servants (R$ 66 thousand). And both are much higher than the amount spent on INSS, little over R$ 5.3 thousand per year.