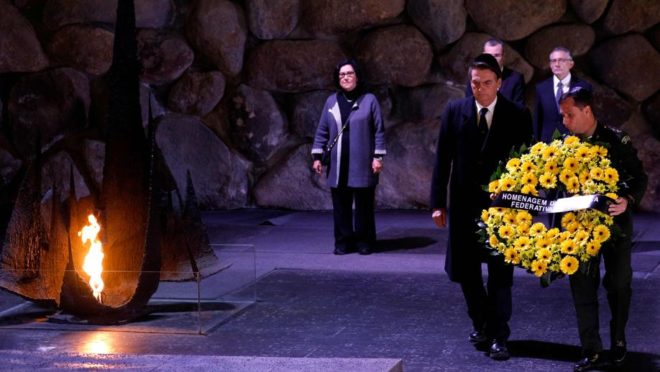 President Jair Bolsonaro is coming home after an intense and troubled trip to Israel. While still there, during a visit to the Holocaust Museum, of all places, he insisted on the fallacy that Nazism was a left-wing movement – an assessment denied by the very museum he was visiting. For some reason, people are enjoying looking back these days. Theater chain Cinemark, for instance, refused to exhibit a documentary about 1964 and became a target of criticism because of that. Back to our troubled present, in Rio de Janeiro Mayor Marcelo Crivella may face impeachment. In Santa Catarina, a judge will be investigated after having been featured in a chauvinistic video. And the mystery involving the death of former president Lula’s grandson seems to be solved: he may have died of sepsis, not meningitis.

On his last day in Israel, President Jair Bolsonaro decided it was a good time to fuel the fire of another tiresome controversy: was Nazism left-wing or right-wing? During a visit to the Holocaust Museum, the president agreed with Chancellor Ernesto Araújo, who said last week that Nazism was a left-wing movement. The statement goes against what the museum he visited says: “the German Nazi Party was one among several right-wing groups.”

The theater chain Cinemark has refused to exhibit the documentary “1964: o Brasil entre armas e livros” [1964: Brazil between weapons and books]. The movie intends to show an alternative history of that year, and the Military Coup as a result. On social media, Cinemark stated that the company doesn’t promote political events or movies. Critics, however, say that the company has already exhibited movies like Lula’s biopic.

The Rio de Janeiro Municipal Assembly approved the beginning of an impeachment process against Mayor Marcelo Crivella yesterday. It was a 35-14 decision. Now, the councilpersons will have three months to refer the case to the plenary. Crivella will have to leave office if considered guilty by 34 councilpersons. The mayor is accused of irregularly extending two advertisement contracts.

Judge to be investigated after derogatory words toward women

Last month, judge Jaime Machado Júnior was featured in a video alongside the country singer Leonardo, apparently not as sober as one might expect, saying unspeakable words to female judges from Santa Catarina, where he lives. Unspeakable? Well, let’s say he used a more vulgar way of saying “we are going to make love with thee.” Now the judge will be investigated for his lack of manners, to say the least. He may be compulsorily retired – with pay.

Lula’s grandson may have died of sepsis

Yesterday you read here that Arthur, former president Lula’s grandson, didn’t die of meningitis, as it was believed. Today, Folha de São Paulo affirms that the boy, only seven years old, died of sepsis caused by a bacteria called Staphylococcus aureus. This kind of bacteria is common on the skin, but potentially deadly if it gets into the bloodstream. Neither the hospital nor the family has confirmed the news.