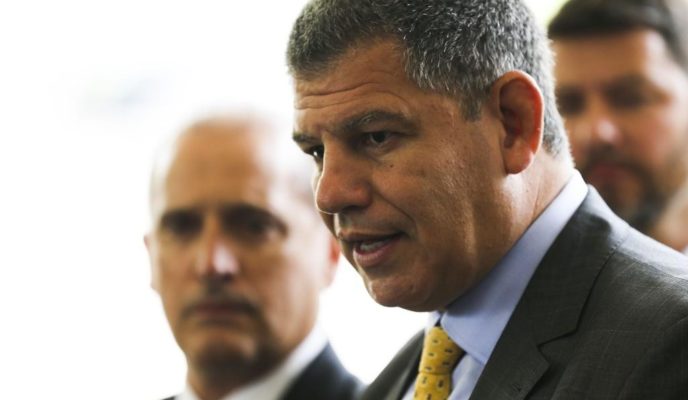 Leader of the party in the Senate, Major Olímpio (SP) said he would be “the most fickle of men” if he were to criticize a minister. Deputy Joice Hasselmann (SP) said there’s no evidence against Bebianno. There’s an effort to separate the government from the party

The “roasting” Secretary-General of the Presidency Gustavo Bebbiano has been experiencing was minimized by PSL member in the National Congress. The party’s leader in the Senate, Major Olímpio (SP), federal deputy Joice Hasselmann (SP), and other members of the party have defended Bebianno on Thursday (14).

“Bebianno was a key player so that we [PSL] could have a ticket in the São Paulo elections. If that hadn’t happened, even Jair Bolsonaro’s election could have been compromised. I would be the most fickle of men if I had any complaints against Gustavo Bebianno”, said Olímpio. Joice said “there is no evidence” against the minister. Other members of the party claimed that Bebianno’s situation has created no discomfort whatsoever within the party.

Bebianno became the focus of the political debate after the revelations made by newspaper Folha de S. Paulo that PSL used “straw candidates” in the state of Pernambuco during the October elections. Members of the party formally took part in the elections, had an insignificant number of votes, but still received copious funds from the party fund. Since these facts were disclosed, PSL entered an internal war, and the responsibility for the case has been transferred between Bebianno and the president of the party, deputy Luciano Bivar (SP).

The episode escalated even further after president Jair Bolsonaro “retweeted” on Wednesday a post written by his son, Carlos, which denied talks between Bebianno and the head of the executive branch. In Wednesday night and all through Thursday Bebianno was considered certain, but he claimed he wouldn’t leave voluntarily his office.

The clash between Bebianno and Carlos had also negative repercussions among PSL members of parliament. One deputy claimed that the president’s son showed a “lack of maturity” by exposing the minister on social media. Major Olímpio recognized the crisis scenario, but said that “the president [Bolsonaro] will be wise and discerning to know how to put things in their due place.”

As well as the attempt to minimize the controversy between Bebianno and the president’s son, the effort made by PSL members is to prevent these conflicts within the party to reach the government. “We must separate things. The legislative acts in one way, the executive in another, and the party is in another sphere,” claimed deputy Coronel Chrisóstomo (RO).

But the defense of Bebianno is not unanimous within the country. Federal deputy Alexandre Frota (SP) went to the tribune of the Chamber of Deputies to make a speech attacking the Workers’ Party (PT) and PSOL, but ended up showing an internal disagreement within his own party. He said on Thursday that he wants “Queiroz in jail”, in a reference to senator Flávio Bolsonaro’s (PSL-RJ) former advisor and driver, and that the party would “burn all straw men.”

Disagreements within PSL and clashes between members of the party and members of the government have been diagnosed by those in the party as a reflex of the inexperience that characterizes a great deal of them.

The PSL, until Jair Bolsonaro’s arrival, was an inexpressive party. In the 2014 elections, it won only one seat in the Chamber of Deputies, and none in the Senate. Now it has the biggest number of deputies in the Chamber and four senators. And most of these elected congressmen are political rookies, who have held no office until they got to Brasília.

“We have a very heterogeneous group. There are professors, members of the military, porn actors,” said ironically one party member. For another one, the party is mostly united, but is suffering because some deputies “want to stand out more than others.” A crack that has gained the spotlight recently happened between government leader Major Vitor Hugo (GO) and the party’s leader in the Lower House, Delegado Waldir (GO). The leader in the Chamber of Deputies, who is currently in his fourth term, questioned publicly the experience of his colleague, who is currently in his first term. Vitor Hugo answered in the social networks, and was subsequently praised by several other congressmen.

To try to pacify the spirits, party president Luciano Bivar held a dinner at his home on Wednesday. The meeting had a celebratory aspect, but also served as a sort of “preliminary defense” of the deputy in the case of straw candidacies: PSL members reported he presented campaign material of the candidates involved and claimed they really campaigned: “the only problem of the dinner is that there was no wine,” a congressman joked.

In another effort to unify the PSL discourse, the party is considering the creation of a new statute. The works involving this effort were delegated to deputy Luiz Philippe de Orléans e Bragança (SP) – another rookie in the Chamber. One of the ideas that should be part of the text is the creation of rules and a profile for new members of the party. As well as seeking more unity among its affiliates, the party wants to avoid new members motivated just for the fact that PSL is the party of the president of the Republic.

“PSL went from an ‘ugly duckling’ to the ‘beautiful swan’ in the political scenario. And our party is made up of people who still hadn’t met one another. Among the more traditional parties, people begin as militants and then gradually rise within the party structure. Does PSL have a party identity? Not yet,” said Major Olímpio.

Among internal disagreements, one speculation launched in the last few days report that two sons of the president, Carlos, and Eduardo Bolsonaro, were allegedly considering the creation of a sort of “PSL do B”, a new party which would take away the most relevant members of PSL, while at the same time getting rid of those who were being a nuisance, such as minister Bebianno.

PSL members who spoke under secrecy to Gazeta do Povo said they were not aware of such plans. The general analysis is that, although mistakes have been made by the president’s sons, the party has shown more virtues than flaws. “This is pure rubbish,” said one of them.

“About those who are speaking about the creation of a new party: the deranged fellow who has that as a goal will be marching alone,” summed up Major Olímpio.