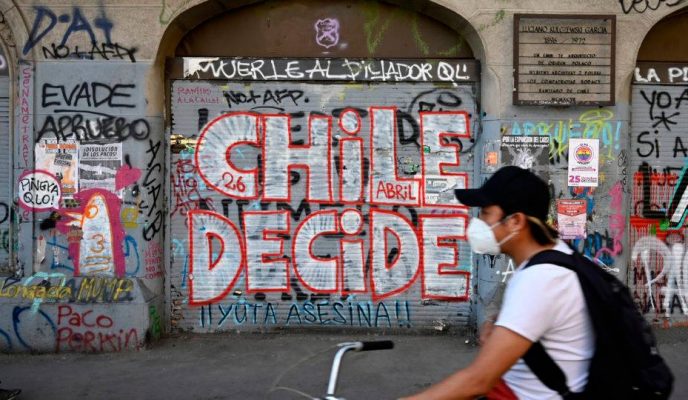 This weekend, Chileans voted in a referendum to determine whether to draft a new Constitution for the country, in order to overturn the current one, implemented during the Pinochet dictatorship; the decision is being seen as the most important political result of the recent anti-government protests which have been rocking the country. Eight days before this year’s presidential elections, nearly 60 million Americans have already voted, and a massive turnout is being expected. Brazilian vice-president Hamilton Mourão has stated during an interview with journalists that the government will extend the deadline for the departure of the Armed Forces from the region known as “Legal Amazon” until April 2021, in order to deter any environmental crimes in the region. World Health Organization authorities have issued warnings against the mandatory vaccination of populations against the novel coronavirus, while at the same time declared that the “nationalization” of vaccines could pose an additional risk to those vulnerable to the pandemic. Finally, Brazilian president Jair Bolsonaro has answered a statement made by Federal Supreme Court justice Luiz Fux, who claimed that a “judicialization” of the COVID-19 vaccines would be necessary, by saying it was not up to judges to rule on the matter.

In referendum, Chileans vote to draft a new Constitution

Nearly 80 percent of Chilean voters, according to data released yesterday evening, who took part in a plebiscite held this Sunday, approved the drafting of a new Constitution for the country. The new text will be written by a Constitutional Convention elected specifically for the task, according to the majority of the voters, while 20 percent opted for a new Constitution written by a Mixed Convention, formed by an equal number of current members of Congress and newly-elected ones, with an equal amount of voters who opposed altogether the scrapping of the current Constitution. The current Chilean constitution was drafted and ratified during the right-wing dictatorship of general Augusto Pinochet, which lasted from 1973 to 1990, and this weekend’s plebiscite was the most important political result of the anti-social inequalities protests which have been rocking the South American nation since November 2019.

8 days before US elections, nearly 60 million have already voted

With eight days to go before Election Day, 59.5 million Americans have already cast their ballots in this years’ presidential election, according to a survey published today by the University of Florida’s US Elections Project. According to their figures, 40 million people have already voted by mail, and 19 million went in person to cast their ballots in authorized voting stations. The number is already higher than the total amount of people who voted before the election day in 2016, which was 47 million. With little more than one week to go, results are pointing towards a victory by former vice-president Joe Biden, who is running for the Democratic Party against the current mandatary, Republican candidate Donald Trump.

During an interview with journalists held this morning, Brazilian vice-president Hamilton Mourão said that the country’s Armed Forces will stay until April 2021 in the five-million square kilometer area which lies under the responsibility of the Superintendence of the Amazon Development, SUDAM. The former expiration date for the so-called Operation Green Brazil, in which members of Brazil’s military are being deployed to fight environmental crimes and violations in the region, was November 6th; “we will extend it until April,” said Mourão, adding that out of a total of R$ 400 million destined for the operation, R$ 180 million are still available.

World Health Organization vice-director assistant director-general for Drug Access, Vaccines and Pharmaceuticals, Brazilian-born Mariângela Simão, said last week that the organization does not recommend the mandatory vaccination against COVID-19 in any country, describing it as an “authoritarian measure”. “The WHO defends that it is up to every country to decide. But in a situation in which you’re talking to adults, who have the ability to discern and make wise choices, authoritarian measures are not recommended,” she said in an interview with CNN Brasil. Meanwhile, the organization’s director-general, Tedros Ghebreyesus said on Friday that “vaccine nationalism” would only slow the effort to squash the pandemic.

Brazilian president Jair Bolsonaro said today that an eventual compulsion for the vaccination of the country’s population against the novel coronavirus cannot be decided by the courts. “I understand that this is not a question of justice, it is, above all, a question of health. It is not up to a judge to decide whether you should be vaccinated or not,” he said as he saluted supporters while leaving the Alvorada Palace. Bolsonaro’s statement comes as an answer to a recent interview made by Federal Supreme Court justice Luiz Fux, who said on Friday that a “judicialization” of the matter would be “necessary,” since several states and municipalities have filed for autonomy to rule on the need for a mandatory inoculation of their population.