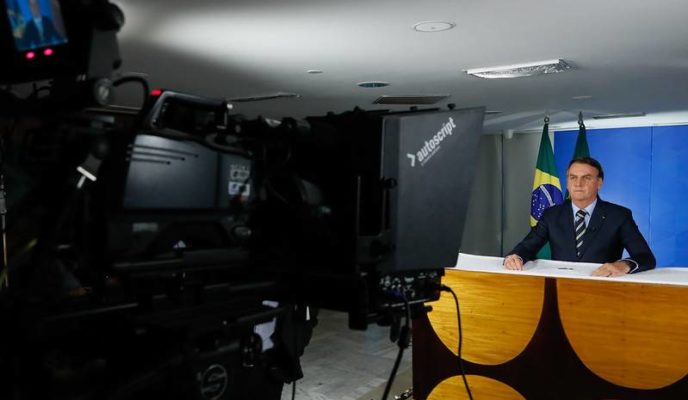 During a nationwide TV address on Tuesday evening, Brazilian president Jair Bolsonaro criticized the current social distancing measure and the shutdown of schools and commerce, as well as the role of the press. Bolsonaro is defending the adoption of the so-called “vertical isolation”, in which only people considered to be in the risk group, like the elderly and those with preexisting health conditions, are kept isolated. Health minister Luiz Henrique Mandetta informed Bolsonaro he will not adopt such measures, citing the example of the United Kingdom, which was forced to switch to a total isolation after the number of deaths kept increasing. During a remote meeting with governors of Southeastern Brazil, Bolsonaro had a heated argument with São Paulo governor João Dória, who harshly criticized the president’s address. Prince Charles, the first in line to the British throne, has tested positive for the novel coronavirus, and is currently self-isolating in Scotland along with his wife, the Duchess of Cornwal. Finally, the US embassy in Brasília released a statement asking all Americans living in Brazil to return home immediately.

In a nationwide radio and TV address on Tuesday evening, Brazilian president Jair Bolsonaro criticized social distancing measures, the shutdown of schools, and the role of the press. Addressing the nation once again about the coronavirus-related crisis, the president said that the federal government is following a strategy to “save lives and avoid mass unemployment” while, at the same time, fighting panic and hysteria, a term once again used by him to refer to the concerns with the pandemic. He demanded the end of mass shutdowns and confinements, saying that “we should return to normality,” and said that his “past as an athlete” would allow him to remain unscathed from COVID-19: “In the worst-case scenario, I would have a mild cold.”

Brazilian Health minister Luiz Henrique Mandetta told allies he will not accept the vertical isolation, which consists of isolating solely the elderly and those with pre-existing health conditions, which was proposed by president Jair Bolsonaro. The minister stressed he wants to maintain the widespread practice of social distancing that is in place at the moment, in order to avoid the spread of the novel coronavirus. Mandetta mentioned the example of the United Kingdom, which was forced to adopt full isolation after initially adopting the vertical one and suffering a gradual increase in the number of deaths.

Bolsonaro and Dória argue during remote meeting with governors

President Jair Bolsonaro and São Paulo state governor João Dória had a heated argument during a remote meeting held today. During the meeting, held between Bolsonaro and governors of all Southeastern states, Dória criticized the address made by the president on the previous night, saying that a president should “give the example, be the mandatary needed to rule, lead the country, and not to divide it.” Bolsonaro reacted by saying Dória was elected after “using his name” during the elections, and called him fickle and a demagogue.

Prince Charles, son of Queen Elizabeth II and the first in the line of succession to the British throne, has tested positive for the novel coronavirus, according to the Clarence House, the Prince of Wales’s official residence in Westminster. Charles is 71 years old and has been presenting light symptoms of the disease. His wife, the Duchess of Cornwall, has also been tested, but has not been infected with the virus. According to the official statement, “in accordance with government and medical advice, the prince and the duchess are now self-isolating at home in Scotland. It is not possible to ascertain from whom the prince caught the virus owing to the high number of engagements he carried out in his public role during recent weeks.”

US embassy asks all Americans to return from Brazil immediately

The United States embassy in Brasília has issued an official statement asking all Americans in Brazil to arrange an immediate return to their country, unless they are ready to remain abroad for an indefinite period of time. “US citizens who wish to return to the United States are urged to do so as soon as possible as the travel situation is evolving rapidly and flight availability is subject to change.” The statement, released on Tuesday evening, also advises US citizens to avoid any international trips due to the global impact of COVID-19.