Fale a língua do mundo. Faça Wise Up.
Fri 28 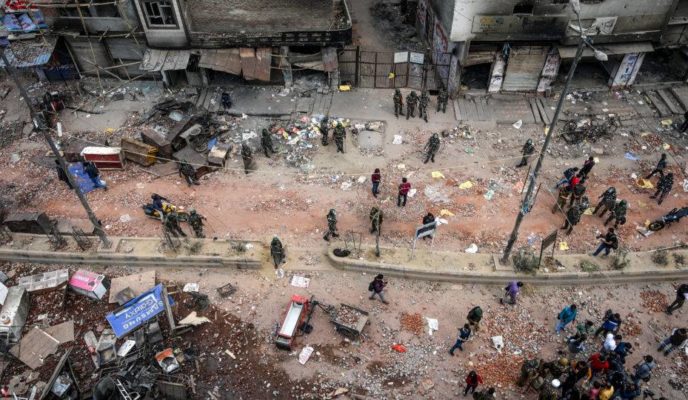 India is suffering one of the worst religious conflicts in its recent history, with growing clashes between Hindus and Muslims after the government of prime minister Narendra Modi issued a controversial citizenship law. Pope Francis has canceled all his public appointments due to a “slight illness”; earlier this week, the Pope was seen coughing and blowing his nose, amidst a growing coronavirus epidemic that has taken Italy by storm in the past weeks. The same epidemic is concerning Brazilian president Jair Bolsonaro, who planned on taking a personal trip to Italy after conducting official visits to Hungary and Poland between April and May. The government of New Zealand is trying to approve a bill which would allow pregnancies of up to 20 weeks to be interrupted; the country’s Catholic bishops have launched an official protest against the decision on the internet. Finally, a major Syrian offensive around the city of Idlib has killed several Turkish soldiers, provoking a similar reaction from Turkey, and may cause another wave of refugees trying to settle in Europe.

India suffers one of the worst religious conflicts in recent history

After the fourth consecutive day of violent confrontations between Hindus and Muslims in India, the number of people killed has risen to 27. The protests have been motivated by a citizenship law presented by the government, and was considered discriminatory by the Islamic community. The wave of violence has left more than 200 people wounded and 100 have been arrested. Indian prime minister Narendra Modi finally broke the silence on Wednesday, appealing for calm on his Twitter account: “Peace and harmony are central to our ethos. I appeal to my sisters and brothers of Delhi to maintain peace and brotherhood at all times. It is important that there is calm and normalcy is restored at the earliest.”

Pope Francis canceled all his public audiences on Friday due to a “slight indisposition”, according to Vatican officials, who did not provide any further details on his illness. Earlier this week, the Pope was seen in public coughing and blowing his nose, raising concerns about his health condition amidst an epidemic of the novel coronavirus in northern Italy, where over 600 people have already been infected and 17 died. According to the Vatican official press, Pope Francis held a mass today and kept all his scheduled appointments at his official residence in Saint Martha’s House.

Bolsonaro may cancel Italy trip due to coronavirus scare

Yesterday, Brazilian president Jair Bolsonaro said he may cancel his trip to Italy, scheduled for the following months, due to the quick spread of the novel coronavirus in that country. He was scheduled to go to Europe sometime between April and May, with a stop in Italy for personal purposes after official visits to Hungary and Poland. Despite doubts over the intercontinental trip, Bolsonaro said that he is still attending the inauguration ceremony of Uruguay’s newly-elected president, Luis Lacalle Pou.

New Zealand may allow abortions up to 20 weeks of pregnancy

Catholic bishops from New Zealand are campaigning against a bill which intends to authorize the voluntary termination of pregnancy within the first 20 weeks of gestation. So far, the country’s current legislation only allows voluntary termination in three cases: incest, fetal malformation, or in cases of pregnancies which pose any risk to the woman’s mental or physical health. In a statement published on the internet, New Zealand Catholic Bishops Conference spokeswoman Cynthia Piper wrote that every “unborn child is entitled to a place in the human family, along with all the rights that go with that.”

An air attack made on Thursday by Syrian troops led by dictator Bashar al-Assad killed 33 Turkish soldiers in the region of Idlib, where the local government is orchestrating an offensive along with Russia in order to reclaim the area, currently under the control of Turkey-backed rebels. 32 other soldiers were wounded and are being treated in hospitals. The action is being seen as the most recent escalation in the violent conflict afflicting the region, and may cause another wave of refugees fleeing the region towards Europe. The Turkish artillery reacted by firing against Syrian targets in several other cities, “neutralizing” 200 installations and 309 soldiers.