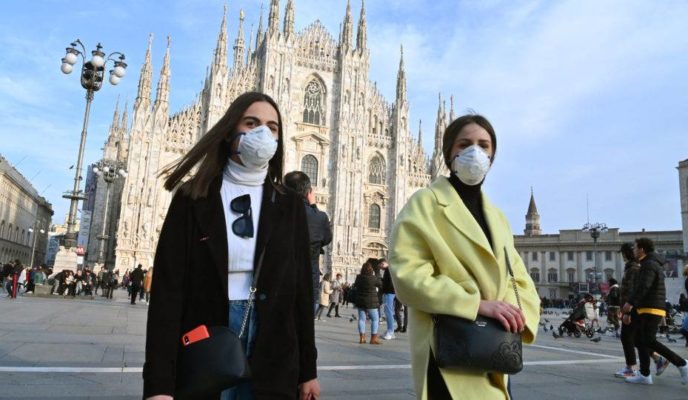 Due to the novel coronavirus scare, Italy has imposed quarantine measures on a quarter of its population; 16 million people in the region of Lombardy and 14 surrounding provinces have been placed on lockdown and will have travel restrictions until April 3rd. Pope Francis delivered his traditional Sunday blessing via videolink, in order to prevent crowds from gathering at Saint Peter’s Square, in the Vatican. President Donald Trump hosted a dinner for his Brazilian counterpart, Jair Bolsonaro, at his private Florida estate, where they both praised their nations’ close friendship; Trump, however, said that he wouldn’t make any promises concerning the recent tariffs imposed on Brazilian steel and iron imports. Soccer legend Ronaldinho Gaúcho remains under arrest at a Paraguayan prison, after being arrested with fake documents; local authorities are investigating his alleged involvement with a local money-laundering scheme. Finally, North Korea has launched at least three unidentified projectiles, according to US and South Korean authorities, the second similar incident made by Kim Jong-un’s government in less than two weeks.

Italy puts a quarter of its population in quarantine

Italian prime minister Giuseppe Conte announced on Sunday night a broad set of quarantine measures aimed at stopping the novel coronavirus epidemic which has hit the European country. About a quarter of Italy’s population – 16 million people – in the region of Lombardy and 14 surrounding provinces, have been placed on lockdown. Travel restrictions have been imposed on the population of these places until April 3rd; museums, schools, gyms, cinemas, and other public spaces are to be shut down. So far, 5,883 Covid-19 cases have been registered in the country, with 233 casualties. According to the Brazilian Foreign Ministry, 90 thousand Brazilians citizens are currently in the quarantine zone.

In an extraordinary measure to avoid gathering crowds at Saint Peter’s Square, in the Vatican, due to the recent outbreak of the novel coronavirus in the Italian peninsula, Pope Francis decided to deliver his traditional Sunday blessing, the Angelus, via videolink. The Holy Father even appeared for a few seconds to salute the few people present at the square, but did not speak. On an ordinary Sunday, up to 40 thousand people may gather to wait for the Pope’s Sunday message.

Trump “makes no promises” to Bolsonaro on tariff reduction

United States president Donald Trump hosted his Brazilian counterpart, Jair Bolsonaro, for a dinner at Mar-a-Lago, his private estate in Palm Beach, Florida. During the meeting, Trump said that both countries have a “very good relationship”, and celebrated his friendship with Bolsonaro, who replied by calling the US “a great country” and extolling the “friendship bonds” between both nations. When questioned about the possibility of lowering or eliminating the recent tariffs imposed by his government on steel and iron imports from Brazil, Trump said: “I don’t make any promises.”

Brazilian soccer star Ronaldinho Gaúcho remains under arrest in Paraguay, after being detained with fake passports along with his brother at a hotel in the country. The investigation has taken a new turn, after the local Federal Prosecution Office found evidence of the soccer player’s association with local businessmen involving money laundering. The head prosecutor, Osmar Legal, has been responsible for arresting several powerful local politicians. Ronaldinho is being held at an Asunción penitentiary where several high-ranking criminals are also detained, ranging from drug cartel bosses to government officials.

On Monday, North Korea fired at least three unidentified projectiles, according to United States and South Korean officials, the second such move made by dictator Kim Jong-un’s regime in less than two weeks. “Our military detected 3 unidentified projectiles fired this morning from the Sondok area in Hamgyong Province, North Korea, toward northeast, toward the East Sea,” said the South Korea Defense Ministry in a statement to the press. “Currently, our military is monitoring related movement in case of additional launch and is maintaining preparedness.” Last week, two unidentified short-range projectiles were fired from an area close to the coastal city of Wonsan.