Fale a língua do mundo. Faça Wise Up.
Mon 29 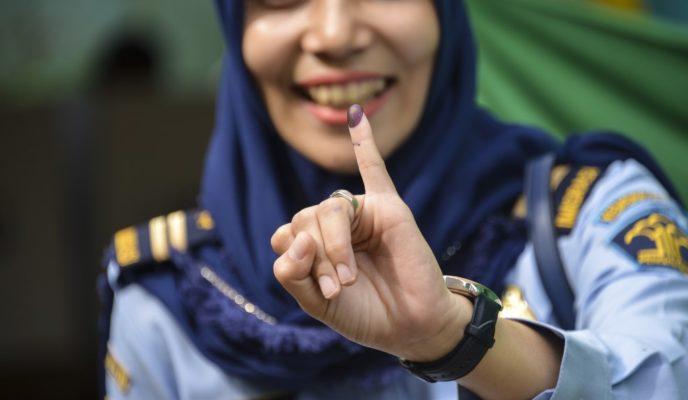 Widodo, known as Jokowi, secured 56.2 percent of the votes, compared to 43.8 percent for challenger Prabowo Subianto with ballots from 52 percent of the polling stations tallied

Indonesian President Joko Widodo led his challenger by about 12 percentage points midway through an official tally of votes cast in the April 17 election, weakening his rival’s claim of victory.

Widodo, known as Jokowi, secured 56.2 percent of the votes, compared to 43.8 percent for challenger Prabowo Subianto with ballots from 52 percent of the polling stations tallied, according to an online count by the General Elections Commission. The incumbent won 44.4 million votes to Subianto’s 34.6 million, data from 420,513 voting stations showed.

The commission still must verify the online data, based on a form filled out at each polling station based on counting of paper ballots by May 22.

The data backs up unofficial quick counts from about a dozen private pollsters that showed Jokowi with a comfortable win, dealing a blow to Prabowo’s claim of having garnered 62 percent of the votes. The former Suharto-era general has claimed “massive fraud” in the election, a charge authorities said was “unfounded” and meant to “de-legitimize the government and election organizers.”

Prabowo’s campaign team remains confident of victory as votes from his strongholds have yet to be counted, spokesman Andre Rosiade said. It was “strange and suspicious” that more votes from Jokowi’s base like Central Java were tallied compared to Prabowo strongholds such as West Java and Banten provinces, he said.

While Prabowo may still launch a legal challenge of the official result just like he did in 2014, his vice presidential candidate Sandiaga Uno has signaled that he’s open to working with Jokowi. “The interest of the country is first and foremost,” Uno said in an interview last week when asked if he would consider a Cabinet post if Jokowi wins again and makes an offer. “I want to contribute to the country.”

Prabowo’s comments questioning the impartiality of the election commission has sparked concerns his followers could hit the streets and cause unrest if the result went against him. Both Jokowi and his Security Affairs Minister Wiranto have warned citizens against starting trouble.

The commission can help ease tensions by speeding up the counting process and issuing a statement that addresses issues raised by the candidates, said Noory Okthariza, a political analyst at Jakarta-based Centre for Strategic and International Studies.

For the president it’s been business as usual. On Monday, Jokowi was chaired the third Cabinet meeting since the vote. He’s ordered ministers to take steps to achieve higher gross domestic product growth next year without diluting the focus on the ambitious infrastructure drive that highlighted his first term and start work on setting a new capital city outside the Java island.

The president may reshuffle his Cabinet before being sworn in for a second five-year term in October as he wants to keep his focus on infrastructure and human resources development, Koran Tempo, reported, citing an interview with Jokowi.

Arya Sinulingga, a spokesman for Jokowi’s campaign team, said the online tally of votes only confirmed the quick count findings and the final official result will reconfirm a win for the president. “It’s now time to support Jokowi for the next five years so that he can complete all the work that he began,” Sinulingga said.

Indonesia held its first simultaneous presidential and legislative elections with more than 245,000 candidates in fray for about 20,000 positions. The turnout was more than 80 percent of the 193 million people eligible to cast their votes. The death of almost about 290 polling workers and police officials from exhaustion from the world’s largest one-day election has triggered calls for separating the vote in 2024.

Jokowi’s Indonesian Democratic Party of Struggle, or PDIP, Golkar and Prabowo’s Gerindra Party led the vote tally in the elections to the nation’s lower house of parliament, known as DPR, commission data showed on Monday.