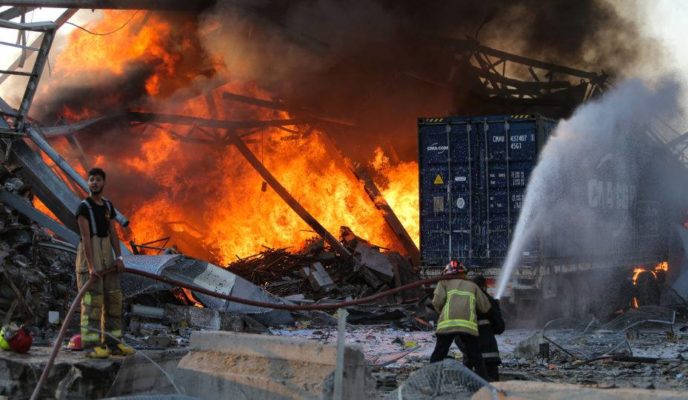 The prime minister of Lebanon, Hassan Diab, has announced his resignation and the dissolution of his whole cabinet, after a wave of protests which followed the disastrous explosion that devastated the port area of Beirut. Former United States vice president Joe Biden has disclosed the name of his running mate in the forthcoming presidential elections: California senator Kamala Harris. Brazilian president Jair Bolsonaro has answered what he described as “unfair” foreign criticism against his government’s policies, claiming the allegations that the Amazon is on fire are “lies” and that his government has a “zero tolerance” policy against environmental crimes. The government of New Zealand has placed the country’s biggest city, Auckland, on lockdown, after four new cases of COVID-19 were registered, 102 days after prime minister Jacinda Ardern had announced that the country had completely eradicated the novel coronavirus. Finally, Russian president Vladimir Putin has announced that his country registered the world’s first vaccine against COVID-19, and added that his own daughter was among the first people to receive it.

Lebanon’s prime minister, Hassan Diab, announced on Monday his resignation and the dissolution of his cabinet. During an address made on national television, Diab said that “the system of corruption” in the country “is bigger than the state” and that the explosions which devastated the port of the capital, Beirut, last week, leaving at least 160 people dead and injuring 6 thousand others, happened due to the “endemic corruption” plaguing the Middle Eastern nation. “May God protect Lebanon,” he said, concluding his resignation speech. Several protesters took to the streets of Beirut yesterday, chanting the slogan “bury the authorities first”.

Former vice president Joe Biden, Democratic Party candidate for the United States 2020 presidential elections, announced yesterday who will be his running mate: California senator Kamala Harris. The announcement was made on Biden’s official Twitter account: “I have the great honor to announce that I’ve picked Kamala Harris – a fearless fighter for the little guy, and one of the country’s finest public servants – as my running mate.” 55-year-old Harris, a daughter of Indian and Jamaican immigrants, is one of the most prominent politicians in the Democratic Party, and has had a long career as an attorney.

Brazilian president Jair Bolsonaro said yesterday that Brazil is being unfairly criticized by other countries in the world, adding that “this story that the Amazon is going up in flames is a lie and we must combat it with true numbers.” The statements were made during the 2nd Presidential Summit of the Letícia Pact for the Amazon. In a videoconference, Bolsonaro also told other heads of state in the region that his government has a “zero tolerance” policy against environmental crimes, and that he is “open to explore our potential in a sustainable way, through partnerships that add value,” adding that “foreign powers” with an eye on Brazil’s natural riches “have an interest in keeping indigenous people living like cavemen.”

New Zealand’s biggest city, Auckland, was placed yesterday into lockdown after registering four new cases of COVID-19, the first local cases of novel coronavirus infection in the country after a 102-day streak. In April, prime minister Jacinda Ardern said that the country had “won the battle against the coronavirus,” indicating that the disease had been eradicated. Today, Ardern informed that the four new cases – all registered in members of a family who did not travel abroad – still have an unknown origin, as authorities are scrambling to trace recent contacts of the family. The quarantine imposed on Auckland is scheduled to last three days; schools, museums, bars, restaurants, offices, and other public spaces must remain shut down.

Russian president Vladimir Putin said yesterday that his country was the first one in the world to fully develop and register a vaccine against the novel coronavirus, according to news agency RIA Novosti. Putin added that one of his daughters has received the vaccine. “As far as I know, a vaccine against a new coronavirus infection has been registered this morning, for the first time in the world. Although I know that it works quite effectively, it forms a stable immunity and (…) has passed all the necessary checks,” he said during a meeting with members of his government. He hopes to begin a mass vaccination campaign soon; the drug will be sold under the name Sputnik 5, a reference to the name of the first satellite successfully sent into space by the Soviet Union, in 1957.