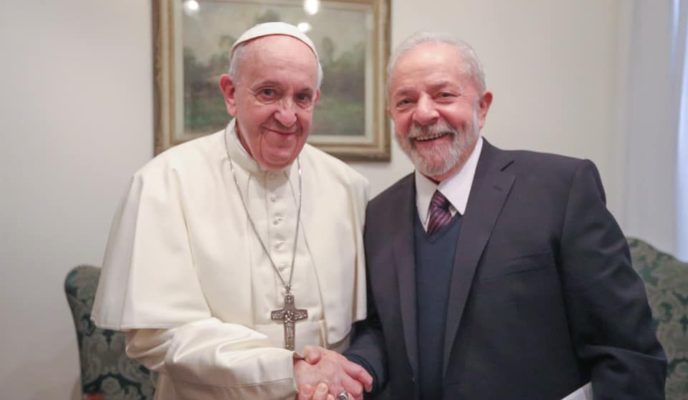 Former Brazilian president Luiz Inácio Lula da Silva met Pope Francis for nearly an hour in the Vatican, when, according to Lula’s Twitter account, they discussed “a more just and fraternal world.” The sons of president Jair Bolsonaro, congressman Eduardo Bolsonaro and senator Flávio Bolsonaro, are being accused of abusing the benefit of the service of federal security officers, including during private trips and weddings. A Brazilian magazine has published pictures which might indicate that militiaman Adriano da Nóbrega fell victim of witness elimination by police forces. In Syria, tension between the local government and Turkish forces has increased, while thousands of people are being displaced. Finally, a bill which would make inmates pay for their incarceration is currently being discussed by the Brazilian Congress.

Former Brazilian president Luiz Inácio Lula da Silva met Pope Francis for nearly one hour on Thursday, at the Vatican. On his official Twitter account, Lula said that his meeting served to “talk about a more just and fraternal world.” According to the Workers’ Party, both leaders discussed issues like the current situation of the Amazon and the political climate in South America. In a statement given as he arrived in Italy, the ex-president said he wanted to “listen more than speak.” The meeting was not on the Pope’s official schedule, and was set up by Argentinian president Alberto Fernández, who visited the Vatican on January 31st.

São Paulo congressman Eduardo Bolsonaro, son of president Jair Bolsonaro, brought along with him five security officers from Congress to his wedding ceremony in May last year, at a cost of R$ 10 thousand for Brazilian taxpayers – plane tickets not included. Rio de Janeiro senator FlávioBolsonaro, on the other hand, spent 23 days in New York during the parliamentary recess; he was escorted by a security officer, who was paid R$ 40 thousand in daily wages, as well as R$ 23 thousand for his plane tickets. In 2019, the Lower House of Congress allocated R$ 229 thousand to pay for 458 daily hotel fees to police officers to escort Eduardo, while four others were paid R$ 51 thousand for 46 days allegedly escorting his brother, and  22 trips to Rio de Janeiro, at the cost of R$ 25 thousand, were never specifically attributed to either of them.

A report published on Thursday evening by Veja magazine claimed that pictures of the body of Adriano Magalhães da Nóbrega support the theory that the militia member may have fallen victim to an execution, corroborating the statements made by his wife and his attorney that he was a witness elimination victim. Nóbrega was gunned down during a confrontation with police officers last Sunday. The magazine had access to pictures taken during the autopsy, which were subsequently analyzed by experts. According to them, the gunshot wounds found on the body indicate he was shot from a close, or extremely close range, pointing towards some form of execution. According to the police version, Adriano exchanged shots with Bahia and Rio de Janeiro state police officers and was shot on site.

Tension between Syria and Turkey increases while 800 thousand leave Idlib

Tension has increased during the past weeks between Syrian troops and the Turkish government, which supports Syrian rebels opposed to Bashar al-Assad’s dictatorship. Turkey claimed on Thursday that 55 Syrian soldiers were killed during their attacks, while the Syrian government, supported by Russia, has intensified their offensive against the province of Idlib, the last rebel stronghold in the Middle Eastern country. Turkey has several military observation points in the region after Syria attacked its troops, while Assad’s troops have taken hold of a strategic road linking all major cities in the country.

Bill aims at making inmates pay for their prison stay

Last Wednesday, the Brazilian Senate’s Constitution and Justice Commission approved a bill that aims at charging inmates for the costs of their own incarceration in the prison system. The bill, which would amend the Penal Execution Law, has been discussed in Congress since 2015. The payment would be made either by the inmates’ own funds or through their labor, if the prison where they’re serving their sentence offers that possibility. The bill also specifies that the measure will not apply to inmates who are unable to make such payments.