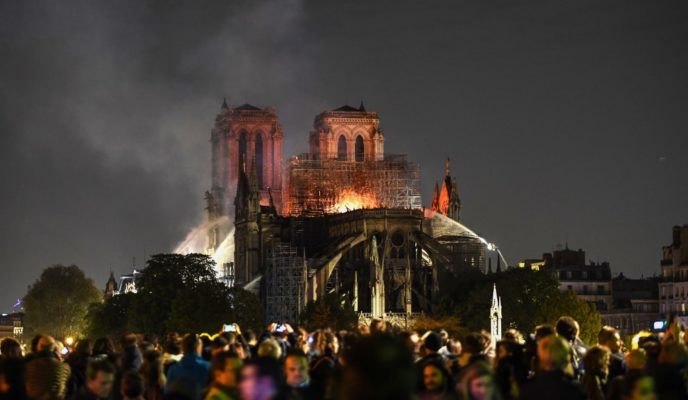 “Notre–Dame is engulfed with flames. Emotion of the whole nation,” Macron said on Twitter

A major fire ripped through Notre–Dame cathedral in central Paris late Monday, forcing the evacuation of thousands of visitors from the 850-year-old Gothic monument and causing French President Emmanuel Macron to postpone a speech to the nation.

Live television footage on Monday showed flames leaping up the spire before it toppled onto the fire-engulfed roof, with smoke billowing out into the evening skyline of the French capital. The cathedral, which is located on one of two islands in the middle of the Seine River, had been under renovation and scaffolding covered much of the roof.

The TV images of the blaze transfixed viewers around the world, as flames ravaged the church that has towered over Paris for centuries and had come through long-range German bombardment during World War I and was spared damage during World War II.

Thousands of onlookers were being kept at a distance by police as ashes fell onto streets surrounding the monument. The cathedral is a major tourist destination, with the number of visitors swelling to as many as 50,000 people a day, especially during periods like now — the holy week in the Christian calendar that leads up to Easter.

Paris Mayor Anne Hidalgo said firefighers were on the scene and she asked everyone to respect the security perimeter. Extra help from outside the city was headed to the capital to help contain the blaze.

Macron was also headed to the site after postponing a much-anticipated speech on planned policy measures following a series of violent protests by the Yellow Vest movement that rocked the capital.

“Notre–Dame is engulfed with flames. Emotion of the whole nation,” Macron said on Twitter. “Thoughts are with Catholics and all the French. Like all citizens, I am sad to see this part of us burn.”

“Deep emotion in the face of this dramatic fire at the cathedral,” Unesco said on Twitter, noting the monument was made a world heritage site in 1991.

Even President Donald Trump was following the fire.

Construction got underway in the 12th century, though the current structures are mostly the result of renovations carried out in the 19th century following damage during the French Revolution.

The Cathedral was at one time in a state of total disrepair and close to the point of being demolished, but was later saved by Napoleon who himself was crowned Emperor in 1804 inside the Cathedral.

The interior of the cathedral is 427 by 157 feet, with its 115-foot-high roof. Two massive early Gothic towers crown the western facade, which is divided into three stories and has its doors adorned with early Gothic carvings and surmounted by a row of figures of Old Testament kings.