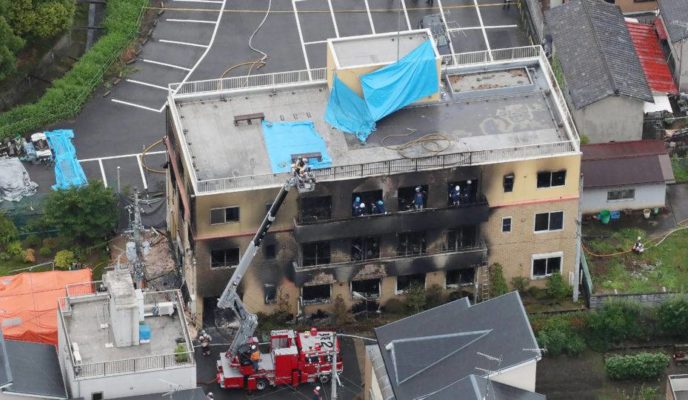 A man set fire to an animation studio in Japan, killing 33 people and injuring at least 36 others. Social media app Instagram decided to remove the likes count on posts, allegedly to protect the mental health of its users and to prevent issues such as bullying and an excessive concern about popularity. Colombian president Iván Duque has accused Venezuelan dictator Nicolás Maduro of helping a guerilla organization in his country to recruit child soldiers. Face-changing app FaceApp may be investigated by the FBI, after allegations that it could be illegally using data from its users and sending them to the Russian government or organizations with ties to Russia. Finally, president Jair Bolsonaro’s decision to appoint his son as Brazilian ambassador in the US has been stirring controversy and dividing opinions within and outside, even among some of his allies.

33 people died after a man set fire to an animation studio in Kyoto, Japan. At least 36 people were injured, according to local authorities. The 41-year-old suspect shouted “Die!” as he sprayed a flammable liquid all over the building and set it on fire. His identity hasn’t been revealed, and there is no information on his motives. The studio, Kyoto Animation, was founded in 1981 and produces movies and anime for television, among them productions such as “K-On!” and “The Melancholy of Haruhi Suzumiya”.

Social media app Instagram announced on Wednesday a change on its platform to protect their users’ mental health and prevent issues such as bullying. As part of a worldwide initiative, the number of likes a certain picture receives will be hidden from viewers during a specific period of time, and only the owner of each account will be able to visualize them. According to one Instagram executive, “we hope this test will remove the pressure of how many likes a post will receive, so you can focus on sharing the things you love.” According to a study by the University of California, the area of the brain responsible for pleasurable activities, like eating sweets or gaining money, is activated when a post gets a like.

Colombian president Iván Duque claimed that the left-wing guerrilla organization National Liberation Army (ELN), responsible for several attacks in order to implement a Cuban-style revolution in Colombia, is recruiting minors in neighboring Venezuela with the help of dictator Nicolás Maduro. Duque also stated that the organization is protecting dissidents from the Revolutionary Armed Forces of Colombia (FARC), another extreme left group acting in that country. ELN and the Colombian government ended their peace negotiations in 2018.

Concerned with national security and privacy risks for millions of Americans, minority leader in the United States Senate Chuck Schumer asked the FBI and the Federal Trade Commission to investigate FaceApp, a Russian app for cell phones that uses personal photos to simulate how a person would look in their old age. “Given the growing popularity of FaceApp and these national security and privacy concerns, I ask that the FBI assess whether personal data uploaded by millions of Americans on FaceApp may be finding its way into the hands of the Russian government, or entities with ties to the Russian government,” he wrote in a public letter.

President Jair Bolsonaro’s controversial decision to appoint his son, congressman Eduardo Bolsonaro, to the post of Brazilian ambassador in the United States, has been dividing opinions both within and outside the government. Rodrigo Maia, president of the Lower House of Congress, said he would never appoint his son, but said that if Bolsonaro believes his son is qualified, he is entitled to do it. Reserve general Paulo Chagas, on the other hand, said that such a decision would indeed be an act of nepotism; “if Eduardo wanted so bad to be a diplomat, he should have attended the Rio Branco Institute instead of pursuing a political career.” Senators will vote on the matter in the following weeks.