Fale a língua do mundo. Faça Wise Up.
Tue 31 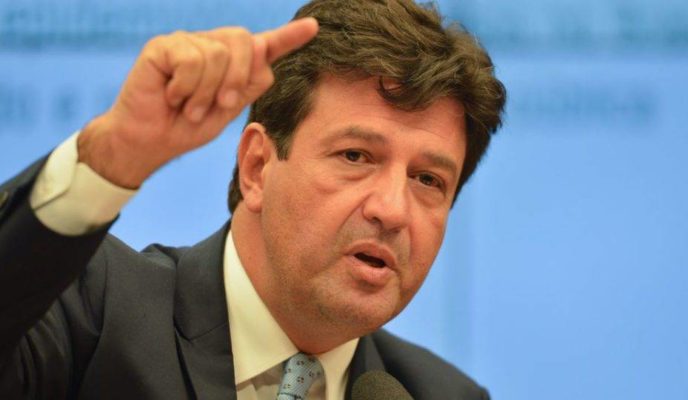 Brazilian Health minister Luiz Henrique Mandetta changed the general tone used by president Bolsonaro during all previous press conferences, and apologized to nationwide news outlets. Meanwhile, both Facebook and Instagram followed Twitter’s example, and deleted posts made by president Jair Bolsonaro showing him walking about Brasília’s market commerce regions, in defiance of his own Health ministry’s orientations. A group of Brazilians stranded in Cuba on account of the outbreak of the pandemic is complaining of being left out, after LATAM officially cancelled all flights to the Caribbean country. The mayor of the capital of the United States, Washington DC, has issued an order allowing the fining of every person who leaves their homes unless they can prove to be fulfilling an essential activity. Finally, convicted rapist and alleged spiritual healer João de Deus has been granted a legal authorization to leave prison due to the COVID-19 pandemic.

Mandetta apologizes to press during conference

Brazilian Health minister Luiz Henrique Mandetta changed his tone during a press conference held on Monday, and apologized to the national press. Mandetta had said on Sunday that “media outlets can sometimes be sordid,” and “seek only to sell bad news.” Since yesterday’s update, he changed his tone, remembering the scolding he received from Globo TV, which responded to his criticism during its Jornal Nacional. “I apologize, I recognize when we make mistakes,” said the minister.

After Twitter deleted content posted by Brazilian president Jair Bolsonaro during the weekend, Facebook and Instagram also deleted from their platforms videos in which the politician was shown talking to people in a low-income suburb of Brasília. The social network informed BBC the content was deleted for violating “community standards, which do not allow misinformation that could cause real damage to people.” Bolsonaro ended his video recordings defending the end of social isolation and the use of hydroxychloroquine, a medication yet to be approved in order to fight the novel coronavirus.

Brazilians stranded in Cuba claim to be despised by airlines

A group of around 30 Brazilians currently stranded in Cuba after the novel coronavirus pandemic are complaining about the lack of information provided by airlines, and are facing no perspective of returning home. Even though all the country’s airports are still open, all companies have canceled their flights, making it impossible to fly back to their home country. Their return flight, scheduled for March 20th, has been canceled by LATAM; “we could no longer find any LATAM personnel at the airport, only a ticket which directed us to a partner company, telling us all borders were closed and all flights would only be scheduled after April 1st.

The mayor of Washington, DC, Democrat politician Muriel Bowser, has issued an order for all city residents to remain indoor unless they need to leave their homes for any essential activities, in an effort to curb the novel coronavirus pandemic. According to newspaper The Hill, the mayor has ordered all people who defy isolation orders should pay a fine of up to US$ 5 thousand. Among all essential activities exempt from her order are shopping for food and essential home supplies, access to government agencies, and any involvement in essential business or domestic trips. Recreational activities, such as jogging or walking domestic animals, have also been allowed.

Brazilian judge Rosângela Rodrigues dos Santos has authorized João Teixeira de Faria, known as João de Deus, to leave jail in order to serve a house arrest regime. According to the new terms decreed by the judge, Santos will have to wear an electronic brace anklet, surrender his passport, and is forbidden to attend any sessions at the Dom Inácio de Loyola House, in Abadiânia. 78-year-old João de Deus received this provisional release in order to avoid any coronavirus-related contact. Judge Santos is responsible for both previous convictions of the alleged “spiritual healer”.