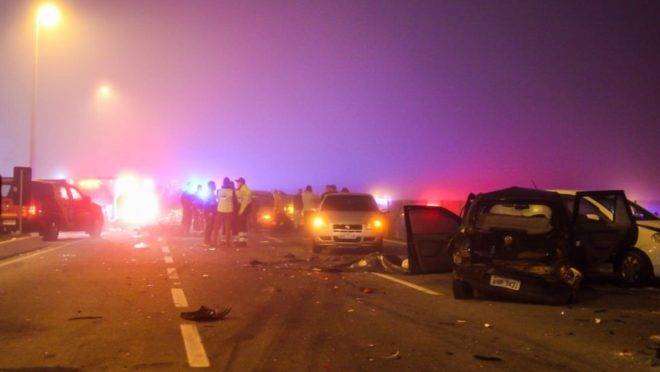 A massive car pileup in the Brazilian state of Paraná involving 16 vehicles caused the death of eight people and injured dozens. The Brazilian Presidency’s Chief of Staff, Walter Braga Netto, became the seventh member of president Jair Bolsonaro’s cabinet to contract COVID-19. John Hume, a Northern Ireland politician who won the Nobel Peace Prize for his outstanding efforts in the fight against sectarian violence in the country, has died at the age of 83. Amidst the highest number of COVID-19-related deaths so far, the US state of Florida was hit by tropical storm Isaias, which already left the state and is currently moving towards Georgia and the Carolinas. Finally, a BBC report has found out that the Iranian government may be hiding the true number of deaths caused by the novel coronavirus pandemic in the country, which may be up to three times higher than the official figures.

A colossal car pileup left eight people dead and dozens of others injured this Sunday on BR 277 highway near São José dos Pinhais, in the Brazilian state of Paraná. According to the first responders, the dense smoke of a fire set near the highway affected the visibility, causing the collision of 16 vehicles, amongst them a police car, five motorcycles, and one truck. Three cars initially collided, when the truck, coming at a high speed despite the heavy smoke, was unable to brake and collided with the cars stopped on the hard shoulder, subsequently running over motorcyclists and other people who were helping the victims of the previous accident. For two days the smoke from nearby fires has been affecting traffic conditions in the region.

The Brazilian Presidency’s Chief of Staff, Walter Braga Netto, has tested positive for the novel coronavirus. The information has been issued today by the ministry’s press office, and raised to seven the number of members of president Jair Bolsonaro’s cabinet infected with COVID-19. As well as Braga Netto, others who were infected with the virus were Institutional Security Office chief Augusto Heleno, Mines and Energy minister Bento Albuquerque, Education minister Milton Ribeiro, Citizenship minister Onyx Lorenzoni, Science and Technology minister Marcos Pontes, and Federal Comptroller General Wagner Rosário – as well as the president himself and first lady Michelle Bolsonaro.

Northern Ireland politician and Nobel Peace Prize winner John Hume died today at the age of 83, at a nursing home in Londonderry. Hume was one of the key figures who helped to create the bases for IRA’s cease fire in 1994, and also played a major role in the peace talks which led to the Good Friday Agreement, four years later, putting an end to the so-called “Troubles” – the bloody sectarian conflict which had been pitching Catholics and Protestants against each other for decades in the country. In 1998 Hume, a founding member of the Social Democratic and Labour Party, won the Nobel Peace Prize along with David Trimble, who then headed the Ulster Unionist Party.

As the number of deaths caused by COVID-19 reached a record high of seven thousand in the US state of Florida, on Sunday, tropical storm Isaias reached the region of West Palm Beach, with winds of up to 140 km/h, and followed in the northeastern direction at 110 km/h, according to the National Hurricane Center. The tropical storm had been downgraded from a hurricane wreaking havoc in the Bahamas and parts of the Dominican Republic and Puerto Rico, but is expected to gather strength as it continues towards Georgia and the Carolinas in the following days.

The number of deaths caused by COVID-19 in Iran may be nearly three times higher than what the government of the Islamic Republic has been informing, according to a report published by the BBC today. Based on documents leaked from the Iranian regime, the British news outlet found out that the total number of people who died after being infected with the novel coronavirus was close to 42 thousand on July 20th, while the government maintained that the figures were 14.4 thousand. The report also informed that the first COVID-19-related death in the country happened on January 22nd, while the first official case was only reported one month later.