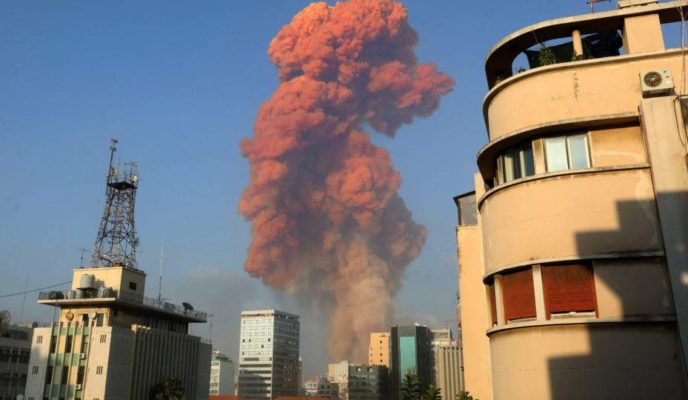 A huge explosion has ripped through the port area of the capital of Lebanon, Beirut, causing widespread destruction, and killing and injuring hundreds of people. Brazilian president Jair Bolsonaro said today that the country will not be able to continue to provide the R$ 600 emergency aid it is currently paying workers in need of help to cope with the novel coronavirus pandemic, due to the effect this measure has had on the local economy. An article issued by Piauí magazine has revealed that Bolsonaro considered sending troops to shut down Brazil’s Federal Supreme Court with Armed Forces and depose all 11 justices, after they discussed the possibility of seizing the president’s phone during an investigation. A massive forest fire near the southern French city of Marseille has forced the evacuation of thousands of citizens, while local firefighters are trying to fight the spread of the flames. Finally, Western sources have reported that Saudi Arabia is using Chinese aid to build a facility destined to process uranium yellowcake from the ore mined in the country – a major step toward building nuclear weapons; Saudi authorities have vehemently denied the accusation.

At least 135 people were killed and 5 thousand wounded in a huge explosion which ripped through the port of Beirut, capital of Lebanon, on Tuesday. The impact was so huge it could be felt over most of the city, and even on the island of Cyprus, located 200 kilometers away in the Mediterranean Sea. The port area, which housed most of the country’s grain silos, was completely devastated, and most of the city’s inhabitants are in a state of panic. The explosion was allegedly caused after a fire that started, due to a yet unknown reason, at a warehouse where tons of ammonium nitrate, a substance used as an agricultural fertilizer, had been stored for six years after being seized by local authorities. Several countries in the world have mobilized to provide aid for the Middle Eastern nation, including Brazil.

Emergency aid cannot be extended for much longer, says Bolsonaro

Brazilian president Jair Bolsonaro said today that it will not be possible to extend for much longer the payment of the R$ 600 emergency aid currently being provided to workers in need due to the novel coronavirus pandemic, given the effects of this measure on the country’s economy. According to the president, the cost of the aid is reaching up to R$ 50 billion per month. “The economy has to keep moving. And some governors insist on maintaining everything shut down,” said Bolsonaro. When asked about the emergency aid being paid to owners of small companies, Bolsonaro said he would discuss the matter with Economy minister Paulo Guedes, and added that the country has already spent R$ 700 billion dealing with the COVID-19 pandemic.

According to an article published by Piauí magazine, Brazilian president Jair Bolsonaro considered occupying the country’s Federal Supreme Court with troops of Brazil’s Armed Forces to depose all 11 justices of the court. The decision was allegedly made during a meeting at the Planalto Palace held during the same day on which justice Celso de Mello decided to publicly release the video of the meeting of the presidential cabinet held on April 22nd. According to the magazine, the discussion on the possibility of seizing Bolsonaro’s cell phone to investigate accusations that he had been tampering with Federal Police investigations was the final straw for the president’s discontent with the court. Also, according to the article, general Augusto Heleno, head of the Presidency’s Institutional Security Office, was responsible for dissuading the president from the idea.

Forest fire in southern France forces thousands from their homes

A large forest fire raging in the region of Marseille, in the south of France, forced the evacuation of 2.7 thousand people on Tuesday. According to the Associated Press, at least 22 people were wounded and several buildings have been damaged. This morning, some 1,800 firefighters were still trying to quell the flames, which, fanned by strong winds, have spread for over a thousand hectares of local vegetation, such as pine forests, and are threatening residential areas and campsites near the coast. Local authorities had to rescue several tourists by boat, and a care home for the elderly also had to be evacuated.

According to unidentified Western sources, Saudi Arabia has been building with Chinese aid an installation to extract uranium yellowcake from uranium ore, a major step for the Middle Eastern country’s ability to obtain nuclear technology. The site of the facility, which has not yet been disclosed, is in a sparsely inhabited area of the northeastern part of the country. The fact that Riyadh is seeking to develop nuclear weapons has generated a great deal of concern among the United States and its allies. The Saudi Ministry of Energy issued a statement “denying categorically” having built any facilities to process uranium ore, but claims that its extraction is an important part of the country’s economic diversification strategy.