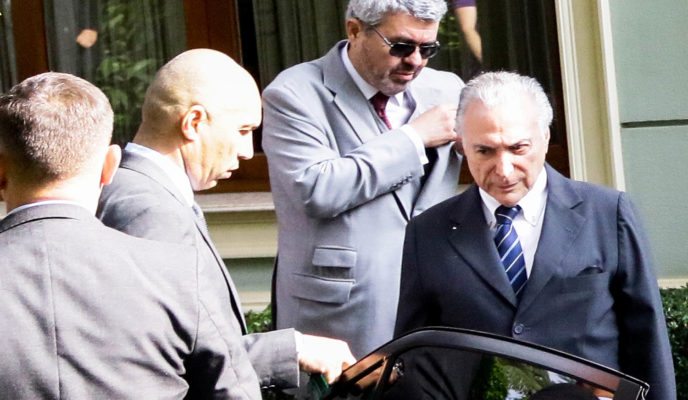 Former president Michel Temer turned himself in to the Federal Police in São Paulo yesterday, after having the habeas corpus which released him from jail suspended. A special commission set up by Congress ruled to remove COAF from the Ministry of Justice and transfer it to the Ministry of Economy; the decision represented a serious drawback for Justice minister Sergio Moro. Also in Congress, President of the Lower House Rodrigo Maia said that the new rules regarding the granting of licenses to carry firearms may be unconstitutional, and will be scrutinized by the Chamber. Automaker Volkswagen releases its first fully-electric car, and promises to revolutionize the market in the same way they did previously with models like the Beetle and the Golf. Finally, Trump fulfills his campaign promise to fight China’s growing domination of the global market, and imposes US$ 200 billion in tariffs on Chinese imports.

In São Paulo, ex-president Michel Temer surrendered to the Federal Police on Thursday after having his habeas corpus suspended by the Federal Regional Court 2nd Appellate Court. He turned himself in hours before the expiration of the deadline imposed by Rio de Janeiro 7th Civil Court judge Carolina Figueiredo, responsible for executing the decision of the court. He did not speak to journalists upon his arrival, and was harassed by members of the public.

The special commission which analyzes Provisional Decree 870 ruled on Thursday by 14 votes against 11 to remove the Financial Activities Control Council (COAF) from under the umbrella of the Ministry of Justice and transfer it to the Ministry of Economy. The decision is a defeat for Justice minister Sergio Moro, who lobbied to keep COAF under his control. The decision now has to be voted on in the Lower House and in the Senate.

Gun decree may be rejected due to unconstitutionality, says Maia

President of the Lower House of Congress Rodrigo Maia said on Thursday that the gun decree signed by Jair Bolsonaro this week is unconstitutional and may be rejected by the House. The politician stated that analyzing the decree will be the focus of Congress in the following days. The decree loosens gun-carrying rules for categories such as collectors, sporting shooters and hunters, and provides gun permits for people who did not have access to it, such as politicians, truck drivers, and residents of rural areas.

Automaker company Volkswagen began to write a new chapter in its history with the ID.3, the first fully-electric car developed from scratch. The company is considering it one of the three most referential products in the history of the brand, next to the Beetle and the Golf. The model is the first in the ID line of electric cars, which promises to make the company the biggest in the segment until 2025, with over 20 other clean-energy models.

US raises tariffs on US$ 200 billion of Chinese imports

Today the US increased import tariffs from 10 to 25 percent on US$ 200 billion in Chinese goods. The measure, long promised by President Donald Trump, caused China to promise retaliations, and government officials said they “deeply regretted” the decision. Both economies are responsible for approximately 40 percent of the global production, and are currently holding a new round of talks.