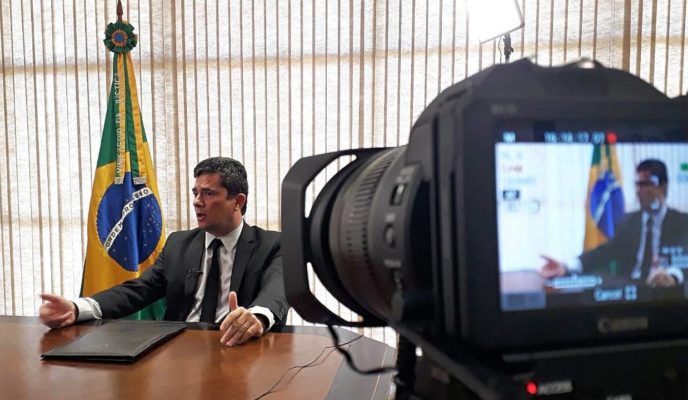 Brazilian Justice minister Sergio Moro spoke for the first time after the release of ex-president Luiz Inácio Lula da Silva, and the latter’s statement in which he accused Moro of partiality; Moro declined to comment on “answering to criminals.” Former Bolivian president Evo Morales, who resigned during the weekend after fierce protests against the country’s recent presidential elections, has accepted asylum in Mexico and boarded a plane sent by Mexican president López Obrador. São Paulo mayor has begun a new chemotherapy cycle, after being hospitalized to treat a skin infection and discovering several health problems. A hacker responsible for breaking into cell phones of several Brazilian authorities has claimed to have found an illegal wiretap in a shower of the facilities where he and the other programmers accused of the same crimes are being held in Brasília. Finally, Brexit Party leader Nigel Farage has announced he will step down from running in the next UK parliamentary elections in order to avoid splitting the right-wing vote in the country and harming prime minister Boris Johnson’s chance of winning.

Brazilian Justice minister and former Operation Car Wash judge Sergio Moro spoke for the first time on Monday about the release of ex-president Luiz Inácio Lula da Silva, tried and convicted by him. The Workers’ Party politician was released after a controversial Supreme Court decision. In an interview with Gazeta do Povo, Moro expressed his discontent with the decision and denied Lula was a “political prisoner”: “this issue of political persecution is obviously an alibi which has been set up, with no basis on the real world.” Moro also denied any personal influence on his judicial decisions, and said he would ignore Lula’s recent attacks against him. “I don’t answer to criminals, whether they are under arrest or not.”

A plane sent by the Mexican government for former Bolivian president Evo Morales landed in the South American country on Monday evening. Morales accepted the offer of political asylum made by Andrés Manuel López Obrador’s government and, while boarding a Mexican Air Force plane, posted on his official Twitter account: “Sisters and brothers, I leave for Mexico. (…) It hurts to leave the country for political reasons, but I will always be attentive. Soon I will return with more strength and energy.” Senator Jeanine Añez, the first in line to become Bolivia’s head of state, said that new elections will be held in January 2020.

São Paulo mayor Bruno Covas will begin today his second chemotherapy cycle in order to treat a cancer in his digestive tract. The procedure should last approximately 30 hours. According to a medical bulletin, the decision has been made based “on the good clinical conditions of the mayor and the results of the recent exams.” Covas has been hospitalized since October 23rd, after seeking medical treatment for a skin infection; he was later diagnosed with thrombosis, until the cancer was discovered.

The Brazilian Federal Police is investigating the use of an illegal wiretap inside a cell at the institution’s headquarters in Brasília. Programmer Thiago Eliezer Martins, arrested during the second stage of Operation Spoofing, which investigates the hacking of cell phones of government officials, claimed he has found a microphone inside the shower of the facility where he and other suspects of hacking into several public authorities are under arrest. An official investigation was launched; the device was handed to police officers, and statements were taken by the institution’s Internal Affairs agents.

Brexit Party leader will not run in UK elections

Contradicting the promise he had made last week to defeat United Kingdom’s prime minister Boris Johnson, Brexit Party leader Nigel Farage said yesterday his party will not take part in the legislative elections on December 12th, to avoid dividing the pro-Brexit vote with Johnson’s Conservative Party. The announcement signals a huge boost in the Conservative chance of obtaining a majority in the British parliament, therefore fulfilling the goal of anticipating the elections in order to get the Brexit deal approved.