Fale a língua do mundo. Faça Wise Up.
Tue 06 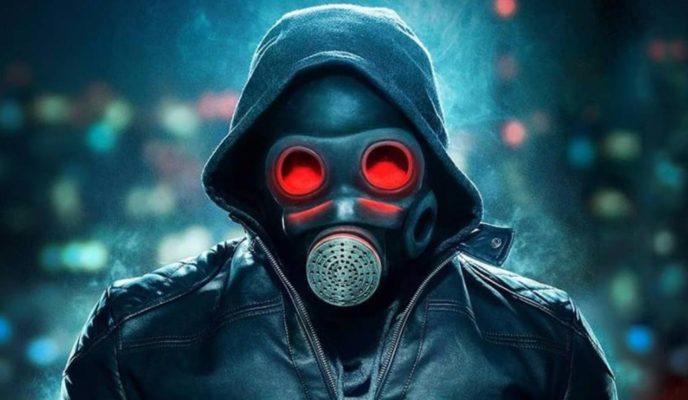 It began as a comic book. How O Doutrinador (“The Indoctrinator”) became a movie and a TV series. It’s the story of a police agent who decides to take the law into his own hands. Here are the dangers of that idea

A crowd is protesting in front of governor Sandro Correia’s palace. Frightened by the sound of gunshots and Molotov cocktails thrown against the building’s windows, the politician runs under the desk in his room. It’s no use: the door is opened with a thud, and a hooded man, wearing a gas mask with red lights in place of his eyes, pulls the governor away from his improvised hideout.

It’s a fictitious scene, part of O Doutrinador (“The Indoctrinator”), a national production coming to Brazilian movie theaters on Thursday (1) – the governor is played by Eduardo Moscovis. The main character, played by Kiko Pissolato, is a police agent who decided to wipe out corrupt politicians through violent actions. What would happen if such a vigilante appeared today in the national scenario? Would corruption decrease?

The creator of the character, graphic designer Luciano Cunha, answers unwaveringly: “Of course not. Not even the appearance of social media and Operation Car Wash, which boosted a bigger vigilance and a bigger demand for feedback from the voters, managed to inhibit corrupt politicians and businessmen.”

Luciano created the Indoctrinator in 2008, but the character rose to prominence in 2013, when he published the comics on Facebook. He was outraged by the corruption cases which were surfacing. “I can’t remember the scandal on the day I decided to draw them for the first time. But I’m completely sure it was the accumulation, the unbearable amount of them, which motivated me to begin the project.”

The graphic designer published a new story in 2014, written along with musician Marcelo Yuka. After the movie is released, the author will publish two new stories, and, in March 2019, The Indoctrinator will become a TV series in Space channel. “The Indoctrinator is just my outrage against the Brazilian political class expressed on paper,” explains the creator. “It’s pure fiction, it’s escapist entertainment. I never wanted to do some sort of Sociology treaty, it’s vigilantism comics in its simpler form.”

Other movies and series have already approached similar subjects – such was the case of 2012 U.S. production Dredd. Besides that, two Brazilian fiction books talked about the issue – one of them is Distrito Federal, written by Nelson de Oliveira under the Luiz Bras pseudonym, which tells the story of a cyborg who begins to exterminate corrupt politicians in Brasília. The other one is Adilson Xavier’s 2.999 Graus – A Arte de Queimar no Inferno (“2,999 degresss – The Art of Burning in Hell), where a vigilante uses a blowtorch to torture and kill corrupt politicians.

Although “vigilantism” may resonate with most people who watch the news and feel outraged, violence is not the solution – because under the rule of law, every citizen, no matter how corrupt, is entitled to a fair trial. Everyone has an intrinsic dignity, which can’t be removed from them, no matter how bad that person is.

Assuming such a vigilante came along, it is possible that he would be able to kill an important politician. While the reaction could be, on one hand, the euphoria of part of the population, and an initial fear among corrupt politicians, on the other, it would start an immediate reaction from the police forces.

“The violence could worsen the problem of corruption,” says Michael Johnston, a political scientist and professor at Colgate University. “It would legitimate violent action from the persecuted politicians, and encourage a hunt for the suspects. That is what will happen with Rodrigo Duterte’s tactics in the Philippines,” he explains, referring to the Philippine president who wishes to distribute 42 thousand weapons to ordinary citizens, especially community leaders, so they can go around the country killing people involved with any form of illicit activities, especially drug trafficking.

In such a scenario, a climate similar to that of Joseph Stalin’s Soviet Union would be implemented: any accusation, no matter how little justified by concrete evidence, would mean a death penalty or exile. And the dead corrupt politicians would quickly be replaced by other ones – as it already happens with members of the organized crime.

But if going around killing politicians wouldn’t work, what would?

“It is essential for the society to demand that laws be put into practice,” explains Michael Johnston. “As [U.S. 19th century activist] Frederick Douglass wrote, ‘power never concedes anything without a demand’.” For that, mechanisms of external control and transparency practices which ensure the every form of contract and bidding are publicized, as well ensuring that all public works can be accompanied by the public, must walk hand-in-hand with the abiding of the law.

With that, Brazil could truly advance in the fight against corruption without becoming a state prone to the solution through savagery. It would be extremely advantageous: usually, the most honest countries in the world are also extremely developed.

One needs only to compare the current figures in Transparency International’s ranking, which lists, as world leaders, Denmark, New Zealand, Finland, Sweden and Switzerland, with the list of countries according to Human Development Index: the most transparent countries are, respectively, in 11th, 16th, 15th, 8th and 2nd place. It is proof that, with easy solutions and effective measures of fighting corruption, the country would have a lot to gain.