Fale a língua do mundo. Faça Wise Up.
Thu 06 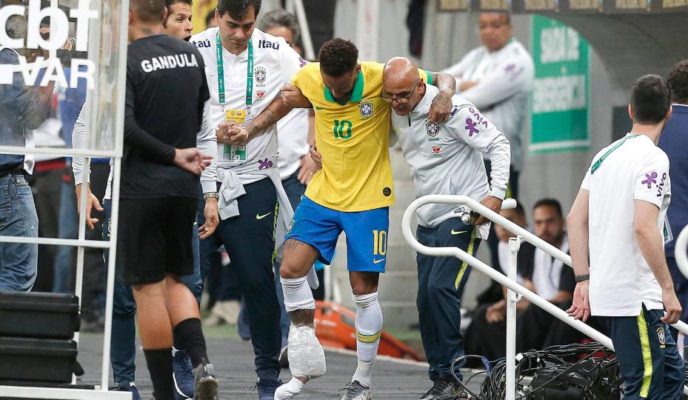 Brazilian soccer star Neymar will not play the 2019 Copa America. Yesterday, the striker suffered an ankle injury during a friendly match against Qatar. Former Brazilian president Luiz Inácio Lula da Silva may be transferred to the semi-open system, according to a decision by the Federal Prosecutor’s Office. Lula will still have to pay a fine and will be required to wear an ankle monitor – something which he has already claimed he will not be doing. The issue of criminalizing homophobia is being discussed in the Brazilian Lower House, after a recent favorable decision issued by the Federal Supreme Court. Evangelical members of parliament, however, are claiming they will oppose any decision on the subject. Russia is testing a new hypersonic interceptor missile which they claim has an unparalleled degree of precision. Finally, Brazilian TV host Bela Gil is being criticized for recommending the treatment of ear infections with hydrogen peroxide, a practice medical experts have considered to be dangerous.

Neymar ruled out of the 2019 Copa America

Brazilian national squad striker Neymar is out of the 2019 Copa America. The soccer star injured his ankle last night during a friendly match against Qatar, and will not be able to recover in time for the competition. The Brazilian Soccer Confederation will announce his replacement in the following days. Also yesterday, a video was released showing the scuffle between Neymar and the girl who is accusing him of rape; in the video, she is shown assaulting him and throwing a glass bottle at him, while he tried to defend himself. In an interview with SBT network, she insisted on the accusation that she was raped.

Lula may be transferred to semi-open system, but refuses to wear an ankle monitor

One day after the Federal Prosecutor’s Office issued a decision raising the possibility of Luiz Inácio Lula da Silva progressing to a semi-open system, the former Brazilian president denied he will wear the mandatory ankle monitor. “Ankle monitors are for criminals or pigeons,” he said. Subprosecutor-General of the Republic Áurea Lustosa Pierre confirmed the Workers’ Party politician has already served enough time of his sentence to progress to semi-open conditions, but he will still have to pay a R$ 2.4 million fine imposed by the Superior Court of Justice. In the semi-open regime, the inmate is allowed to leave prison during the day in order to work.

Criminalization of homophobia is discussed in the Lower House

After the latest session of the Federal Supreme Court in which the criminalization of homophobia was discussed, the Human Rights Commission of the Brazilian Lower House approved yesterday a bill on the subject. Drafted by the Workers’ Party congresswoman Maria do Rosário, the bill was approved during an emergency session in which several members of the commission were not in the House. Even though the bill establishes the caveat that manifestations of belief which might oppose homosexual behavior will not be criminalized, members of the Evangelical bloc in Congress have already expressed they will oppose the bill.

A hypersonic interceptor missile has been successfully tested by the Russia Aerospace Defense Forces in Kazakhstan, according to a statement released by the Russian Ministry of Defense. The interceptor missile defense system is able to detect, track, and destroy enemy missiles, and may contain nuclear warheads or conventional, chemical or biological weapons. Russia claims the precision of its interceptor missile system has never been equaled by any other country. The missiles, which will be used to protect Russian borders against aerospace armaments, can be launched from land, sea or air, and fly at nine times the speed of sound.

The risks of putting hydrogen peroxide into ears to fight infections

Brazilian author, TV hostess and chef Bela Gil recently endorsed on her Instagram profile a practice to fight ear infections, flu, and colds, which is becoming very common, raising a debate on the matter. Bela claims that as soon as she feels the first symptoms, she puts one to three drops of hydrogen peroxide into her ears. Even though the practice is not new, it is not recommended by otolaryngologists and medical experts for two reasons: the use of hydrogen peroxide may worsen the infection, since it might delay the patient’s decision to seek medical treatment, and could irritate the auditory tract. If the person has a perforated eardrum, the situation could become even worse.