Fale a língua do mundo. Faça Wise Up.
Tue 27 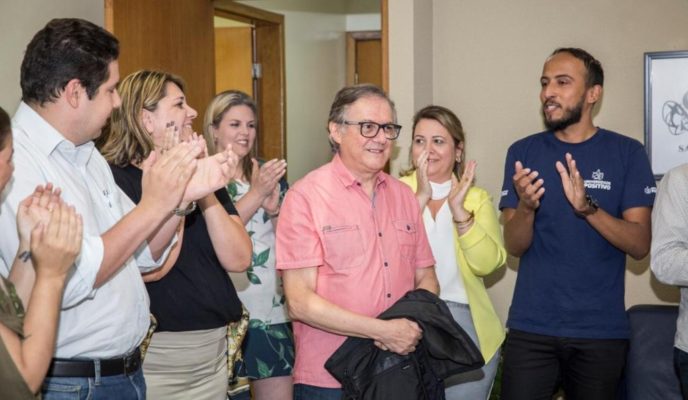 In an event at Londrina, the future minister said that professors need to open their “minds and souls” to go beyond Marxism, and praised the model of military schools

In the professors’ room at the Positivo University, in Londrina, around 50 people, among professor and employees, waited for the arrival of the future Education minister of Jair Bolsonaro’s (PSL) government, Ricardo Vélez Rodriguez. The event, promoted by the institution on Monday (26), was a way of congratulating the Colombian-born professor for his nomination to occupy one of the most important offices in the federal government.

Before the press conference, Rodriguez insisted he would be speaking as a professor since he is yet to occupy the post. But once the protocol of the event was over, he talked about several topics, including the high school reform and the lack of need of everyone going to universities, the Escola Sem Partido project, distance learning, military schools, management of public universities and the discussion of gender on classrooms.

On the latest topic, the future minister was emphatic when he said he doesn’t agree with the way the issue has been approached in schools. “I don’t agree, for a very simple reason: it is nature who defines gender, it’s the individual. So the debate on gender education seems to me a bit abstract,” he said. He mentioned examples of Canada provinces which abolished the gender education imposed by the federal government due to their administrative autonomy and conservative governments.

“I believe that, when people are asked where they came from, once the individual itself is examined, gender education is something that is imposed from the top down, without respecting individualities. The culmination of individualization is what? It’s sexuality. So, if I fight against an individual, I’ll fight against sexuality, and I will try to regulate society by decree, which is not good, it’s a shot off target.”

Rodriguez defended an improvement in the teaching conditions of elementary schools in the municipalities, as opposed to the centralizing view which had been predominant throughout the past decades. The mentioned Anísio Teixeira’s Escola Nova as a good example of what needs to be done in the next years by the Ministry of Education.

“We have to go to an approach towards where the citizen lives, the municipality. I think it would be worth today to bring back this perspective of improving the education conditions since the municipal schools. Surely, the municipality is democracy’s elementary school. It is there that the citizen’s conscience and education are formed, and it is there where we can begin to rescue the quality of our teaching,” he detailed.

On the discussion regarding the Escola Sem Partido (“Non-Partisan School”) project, the future minister said he didn’t believe in a possible curbing, or even violation, or students’ and teachers’ rights. He claims to have been in one of the sessions of the Chamber of Deputies which discussed the subject “in a very open way”. Still, he defended a regulation on the issue.

“The controversy which came about regards whether there can be or there cannot be an indoctrination of our students. I think indoctrinating them is not good. The student, in his first years at elementary school, has to be educated fundamentally to get integrated into his community, into his country, which is a country above all parties. No political party will make the boy, the young person, have a citizen conscience,” he defended.

Professor emeritus at the Army Command and General-Staff School, Rodriguez suggested that the model of military schools should be followed by other teaching institutions in the country. The goal, he assures, is not to turn all schools into military units, but to show that it is possible to have efficiency and discipline in other environments.

“Military schools nowadays represent for Brazil the best in terms of quality and discipline demands. It is interesting when we visit a military school we are surprised, as a teacher. Whereas when we enter a regular classroom we see all those brats, that mess, it is hard to make them quiet. In a military school, they all stand, salute their teacher, and sit down when we say there should be at ease. It is a rare discipline to be seen. Efficiency works. Efficiency can be seen in the results. I think military schools are an archetype of what’s good, and what we can do for schools,” he explained.

Targeted by criticism from the president-elect, the ENEM exams should also be reformulated in Rodriguez tenure heading MEC. The future minister said there are excellent professionals and institutions which could apply exams more impartially. He also mentioned cases of students which had to answer questions in a way which went against their own convictions for being afraid of getting low grades in the subsequent evaluation. When asked if the questionnaires will have to undergo Bolsonaro’s personal assessment, Rodriguez said no one would stop him. “I think it’s great that the president is interested in the quality of our exams,” he claimed.

The future minister also considered the possibility of distance learning a positive thing – “digital learning”, as he called, ensuring the access of every child to all technology available. He said Brazil was lagging behind on the issue, partly because of the market reserve imposed in computer products during the 1980s, and added that the adoption of this method should be done based on common sense. “I think digital learning is welcome, with the conditions it ensues: preparing tutors and establishing a network which can create an interconnection. It’s not about a child alone in front of a computer. It’s about a child using all of technology’s resources,” he said.

A better human resource management and a bigger demand for results were two measures he proposed as a way to avoid the lack of resources in public universities – which should remain public, Rodriguez guarantees. According to the future minister, a student of such institutions costs “four or five times more” than a student of private institutions, and that difference in investment should be “justified to the electorate, which is who finances these institutions.”

Rodriguez classified the high school reform done during Michel Temer’s government as “well-intentioned, but incomplete.” He regarded as “nonsense” the idea that the aim of this stage of education was just to get into universities, and that schools should also prepare students for the labor market.

“Not everyone should go to university. It’s nonsense to think that the democratization of universal university is the goal. No, not everyone would like to go to a university. I think that higher education should have as its aim showing the student that he can put into practice his knowledge and make money out of it. Just like YouTubers are making money without having been to universities.”

Lastly, Rodriguez claimed his priority in the Ministry of Education is enabling educators to “open their minds and souls” to understand that there are other forms of teaching and education.

“I will try to care about people, care about students in their classrooms, about teachers who feel oppressed by the violence in their classrooms, about the qualification of our professors and their wages. That all must be taken into account. We can’t remain hostages of a Gramscian indoctrination of a Marxist bias which ended up prevailing in many universities and in the formation of many of our professors. What is teaching? Transferring knowledge which you can put into practice. What is education? Transferring knowledge which you can put into practice, with values. Well, without values, human life loses its interest. I value, therefore I am. It is a question of value, as a citizen, which should be infused throughout the whole educational process.”