Fale a língua do mundo. Faça Wise Up.
Tue 01 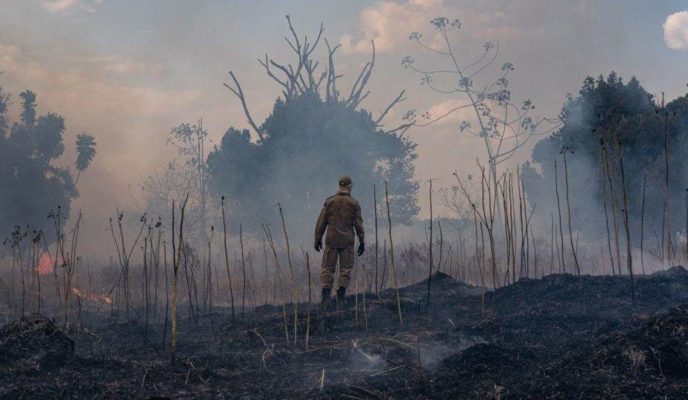 The number of fires in the Amazon region has plummeted, according to a new study, and is the smallest in six years. Brazilian Justice and Public Safety minister Sergio Moro has addressed the issue of an increase in the number of police officers who committed suicide in recent years, and described the matter as “worrying”. A sword attack in a school in Finland has left at least one person dead and ten others injured; local police were forced to discharge firearms to subdue the suspect, who is under arrest. A Japanese airline introduced an innovative feature on its website which allows passengers who are purchasing online tickets to see where toddlers will be seated so they can avoid spending the entire flight next to a crying baby. Finally, a new disease, similar to leishmaniasis, but more severe, has been identified in the Brazilian state of Sergipe.

Number of fires in the Amazon plummet, and is the smallest in six years

If the situation of fires in the Amazon region became out of control in August, the good news for the environment is that September reversed the indicators and there was a reduction in the number of heat spots in that biome, reaching a level inferior to the one registered in 2014. Data released by the National Institute of Space Research, INPE, has shown that during September, 19,925 heat spots were registered in the Amazon biome; this is less than 2016, when 20,522 spots were registered in September. For the government, several factors explain the good results: the presence of the Armed Forces in the region, as well as the whole structure set up to fight forest fires.

The high number of police officers who committed suicide in 2018 has been described as “worrying” by Justice and Public Safety minister Sergio Moro. “People who work with public safety are subject to inhumane pressure, reflected in the high suicide rates of police agents. This is really quite worrying, but we are looking into the matter,” he said during a speech at the Unified Public Safety System Magistrates National Forum. A survey conducted last year by the Brazilian Public Safety Yearbook showed that the number of police officers who committed suicide last year (104) is higher than the number of those who were killed fighting criminals (87).

Sword attack leaves at least one dead in Finland school

An attack in a school in the city of Kuopio, in Finland, has left at least one person dead and ten others injured, according to the police. The local press said a young man entered the classroom with a sword and began attacking the students. “He hit one girl in the neck and then stabbed her in the stomach,” an unidentified witness told newspaper Keskisuomalainen. According to the police, firearms were needed to contain the suspect, who was wounded and taken to a hospital, and is now under custody.

If you’ve ever been on a flight in which a baby cried during the entire trip, you know this situation can be stressful for both passengers and parents. But an airline is trying to ease this stressful situation; passengers buying their tickets on Japan Airlines’ website can see in the aircraft seat map the precise location where children will be sitting, so they can choose whether they want to travel next to parents with toddlers or not. Japan Airlines is the first company in the world to offer this service to its passengers. It flies to over 120 different destinations and has the world’s biggest fleet of Boeing 737s.

A new disease similar to leishmaniasis, but more severe, is found in Brazil

Two people died and 150 were diagnosed with a previously unknown disease in Aracaju, capital of the Brazilian state of Sergipe. Its symptoms are similar to the visceral leishmaniasis, but it tends to be more severe and more resistant to treatment, according to researchers. The parasite which transmits it is still unknown. Scientists at the Inflammatory Diseases Research Center, financed by FAPESP, have been investigating the disease, which has been affecting the population in Sergipe since 2011. The first identified patient died in 2012, due to complications caused by the disease.