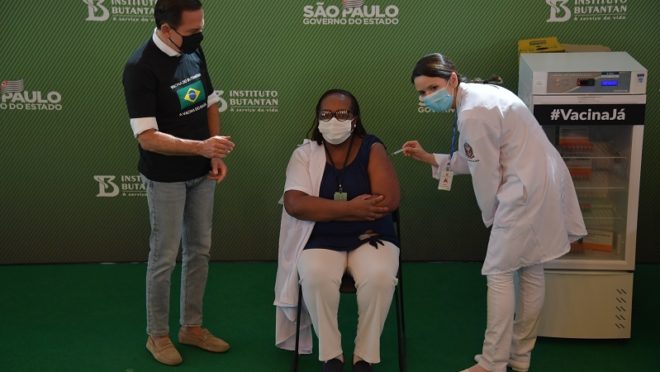 A 54-year-old nurse is the first person to be vaccinated against the novel coronavirus in Brazil. But the country’s vaccination process is at risk, due to the difficulties faced in the import of both vaccine doses and substances and equipment needed to manufacture the immunizer in the country. Meanwhile, India, with whom the Brazilian government had announced a deal to import several doses of the Oxford/AstraZeneca vaccine, has begun to export the drug to neighboring countries, but did not announce any plans of sending them to Brazil. US president Donald Trump has announced the lifting of travel restrictions for travelers coming from several countries, including Brazil, but representatives of president-elect Joe Biden were quickly to say that this measure will not be enforced during his administration. Finally, a panel of experts commissioned by the World Health Organization has criticized the Chinese government for not acting quickly enough to contain the COVID-19 outbreak in its early stages, and the organization itself, for taking too long to declare it a global pandemic.

Nurse is first person to receive COVID-19 vaccine in Brazil

54-year-old nurse Mônica Calazans, who has been on the front line against the novel coronavirus for eight months at the Emílio Ribas, in São Paulo, was the first Brazilian to receive, this Sunday, a dose of the Coronovac vaccine, developed by Chinese laboratory Sinovac in a partnership with the Butantan Institute. The vaccination process began as soon as Brazil’s Health Inspection Agency, ANVISA, authorized the emergency use of both Coronovac and the Oxford/AstraZeneca vaccines against COVID-19. Mônica, a black woman who lives in one of São Paulo’s poorest neighborhoods, is in the so-called “high-risk group” due to her health conditions: she is obese, has high blood pressure and has diabetes. Meanwhile, São Paulo governor João Doria has been criticized by other Brazilian state governors and the country’s Health minister, Eduardo Pazuello, for deciding to begin the vaccination process before the rest of the country.

Only a few days into its vaccination campaign against the COVID-19, Brazil is already at risk of having to curb it due to the threat posed by difficulties in the import of vaccine doses and substances and equipment needed to manufacture it in the country. The immunization plan began with only 6 million doses of Coronavac, imported from China by São Paulo’s Butantan Institute, and 2 million doses of the so-called ‘Oxford vaccine’, produced in India, which should already have arrived, but after two postponements the government is yet to schedule a new date for their delivery. The current amount is not enough even to vaccinate all health care professionals, around 5 million people in Brazil, since each person needs to receive two doses of the vaccine in order to be considered immunized.

Bhutan and Bangladesh will be the first countries to receive from India doses of the COVID-19 AstraZeneca vaccine developed in a partnership with Oxford University and produced locally by the Serum Institute. Indian government sources said that doses will also be sent to the Maldives, Nepal, Myanmar and the Seychelles. The Brazilian government had prepared a cargo plane to retrieve two million doses of the vaccine in India, imported by the Oswaldo Cruz Foundation, but was forced to cancel the flight due to the refusal of Indian authorities to provide the immunizers.

Trump announces lifting of US travel restrictions, but Biden rules it out

Yesterday, United States president Donald Trump announced he had lifted entry restrictions in the country for non-US citizens coming from Brazil, the United Kingdom, and most European countries. The measure is scheduled to be enforced after January 26th, on the same day in which the requirement of a negative test for COVID-19 will begin to be asked from for all travelers. However, the transition team of president-elect Joe Biden quickly came forward and said he has no intentions of backing the measure; “With the pandemic worsening, and more contagious variants emerging around the world, this is not the time to be lifting restrictions on international travel. On the advice of our medical team, the Administration does not intend to lift these restrictions. In fact, we plan to strengthen public health measures around international travel in order to further mitigate the spread of COVID-19,” said Jen Psaki, Biden’s spokeswoman, on her Twitter account.

A report made by a panel of experts at the request of the World Health Organization has criticized China for not acting quickly enough to contain the initial outbreak of COVID-19. The panel also criticized the organization for delaying the announcement of a global pandemic. The Independent Panel for Pandemic Preparedness and Response has been set up by the WHO director-general in response to the resolution 73.1 of the World Health Assembly, and aims at providing a path for countries and global institutions to tackle future health threats based on the evidence and lessons learned from this pandemic. The report, published by The Washington Post this Monday, said that “what is clear to the panel is that public health measures could have been applied more forcefully by local and national health authorities in China in January 2020.”