Fale a língua do mundo. Faça Wise Up.
Tue 09 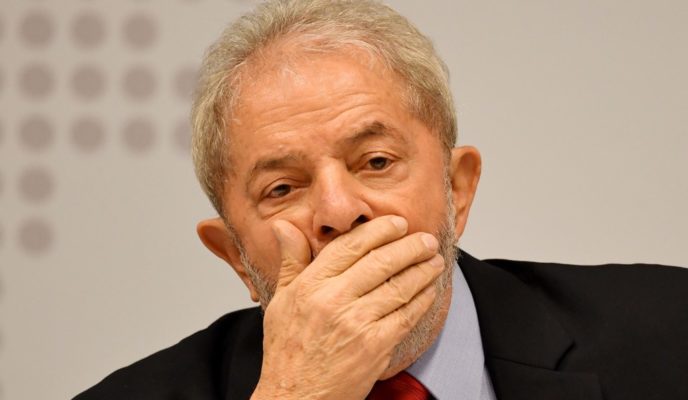 Twice the Workers’ Party politician has been close to obtaining his freedom, but the Federal Supreme Court (STF) has just postponed a trial that could be beneficial for him

An unwelcome guest at the Federal Police Superintendence in Curitiba, ex-president Luiz Inácio Lula da Silva (PT) will complete on Sunday (7) one year in jail, and is seeing his chances of freedom increasingly distant. Twice the Workers’ Party politician has been close to obtaining his freedom, but the Federal Supreme Court (STF) has just postponed a trial that could be beneficial for him. The maintenance of Lula in his “special cell” has an estimated cost of R$ 300 thousand per month. Still, the Federal Prosecutor’s Office (MPF) ruled that the inmate could not be transferred to another prison institution due to the lack of “physical and moral” safety conditions.

Lula has been arrested in Curitiba since April 7 last year. He is currently serving a 12-year and one month sentence imposed by the 4th Region Federal Regional Court (TRF-4) in the case involving his Guarujá triplex apartment. This second-instance conviction is what is keeping him in jail, based on an understanding adopted by the STF, which decided in 2016 that the execution of the sentence after a second-degree conviction is constitutional.

The STF had a trial on the constitutionality of second-instance arrests scheduled for next Wednesday (10). The justices would rule on two Direct Actions for the Declaration of Constitutionality (ADCs) which address the issue generically, and the analysis of the case could set Lula – as well as other inmates in the same situation as him – free. The trial, however, was removed from the agenda by STF president Dias Toffoli on Thursday (4), after a request made by the Brazilian Bar Association (OAB), which claimed it needed more time to analyze the case due to a change in the entity’s directing board. No further dates were set to readdress the issue on the Court.

Even though the current understanding of the STF is that second-instance arrests are constitutional, a new adjudication on the matter could reverse this understanding. The matter was decided in 2016 by six votes against five for the constitutionality of such arrests, but justice Gilmar Mendes, who voted along with the majority, has already said he changed his mind on the issue. If the score is reversed, all inmates in Brazil who are serving sentences based on second-degree convictions could be released, including Lula.

Freedom has already slipped through his fingers at least twice

During the course of the 12 months he has been arrested in Curitiba, Lula has already seen his freedom slip through his fingers at least twice. The last one involved precisely the provision for second-instance convictions. In December last year, on the last day before the courthouse vacation, STF justice Marco Aurélio, judge-rapporteur of the ADCs, granted a preliminary injunction to release all those who were arrested in second-instance decisions in the country.

Another episode which almost freed the PT politician happened in July, after an arm wrestle between court instances. In the morning of July 8 – a Sunday – TRF-4 appellate judge Rogério Favreto ordered the release of the ex-president, arguing that Lula was then a pre-candidate in the presidential elections. Then-federal judge Sergio Moro issued an order claiming that Favreto was not a judge competent to try the case, and ordered the Federal Police not to free Lula.

Moro, who convicted the former president, was not the judge in charge of the execution of the sentence. The federal judge was then responsible for conducting Operation Car Wash lawsuits. After his arrest, Lula’s situation was in charge of judge Carolina Lebbos, of the Penal Execution Court. When he ruled on the possibility of Lula being released, in July, Moro was on vacation.

After Moro’s intromission in the case, Favreto reiterated his order to free the former president. The decision was questioned by Operation Car Wash’s judge-rapporteur in TRF-4, João Pedro Gebran Neto, but Favreto reiterated for the third time his order to free Lula. The final decision came on 7:30 pm on that same Sunday, when TRF-4 president Thompsom Flores determined that Lula should remain under arrest.

On the following day, the National Justice Council had already received dozens of petitions against the judges involved in this arm wrestle. Lula remained in jail.

So far, the Workers’ Party politician did not have an easy time in the superior courts, and has lost all appeals presented by his defense team. Before he was arrested, Lula managed to obtain along with the Federal Supreme Court a preventive habeas corpus to prevent his arrest based on the TRF-4 conviction, but was not successful.

When he launched his presidential candidacy last year, Lula tried to obtain another habeas corpus in order to do his campaign, in June, but his request was denied by Operation Car Wash’s judge-rapporteur in the Superior Court of Justice (STJ), justice Felix Fischer.

A series of requests for habeas corpus and appeals claiming irregularities in the processes against Lula have also been denied, both in STJ and STF.

STJ will have the final say on the triplex case

The Workers’ Party defense team is still waiting for a trial in the STJ 5th Panel regarding the appeal presented against his conviction in the triplex case. The appeal has been denied unilaterally by Fischer, but the defense team appealed and is waiting for a collegiate decision.

The attorneys requested the annulment of the process, and that the case should be sent to the Electoral Courts, or at least that the sentence should be reduced, which would enable Lula to serve his sentence in a semi-open regime. The judgment is not scheduled to happen, and does not need to be placed on the agenda in advance. The defense requested to be made aware of the trial date in order to accompany the discussions on the matter, and the Federal Attorney General recommended that their request should be granted.

After this trial, the ex-president will already have been tried in a third instance. If the STJ maintains his conviction, the ADC trial regarding second-instance convictions on the Supreme Court will cease to have any importance on Lula’s case, since one of the arguments defended by Supreme Court justices is to allow prison after processes are analyzed by the STJ.

Despite efforts by the Courts in first and second-degree to keep Lula in jail, the Workers’ Party (PT) politician is an unwelcome guest in the Federal Police Superintendence in Curitiba. The PT politician occupies a special improvised cell, which was previously used to lodge Federal Police agents staying in Curitiba during their missions. The room, with around 15 square meters, has a bed, a desk, and a private toilet.

Since Lula was arrested, his presence at the Superintendence has been the target of controversies involving the Federal Police (PF), the Federal Prosecutor’s Office (MPF), the inhabitants of the region, and the Curitiba mayor’s office. At least two requests to transfer him have been made to judge Carolina Lebbos, responsible for the ex-president’s penal execution, but they have not been granted.

On one hand, the PF claims that keeping ex-president Lula in the Superintendence costs a lot of money and interferes with their work routine, as well as the services provided in the place. An official document sent to the Courts by the corporation right after his arrest estimated a monthly expense of an extra R$ 300 thousand to pay for the new guest. In twelve months, that amount would be approximately R$ 3.6 million. The mayor’s office argued that the Superintendence does not have an official authorization to function as a prison unit, and that Lula’s arrest was disturbing the inhabitants of the Santa Cândida neighborhood, where the PF headquarters are located in Curitiba.

On the other, the MPF argues that “it is difficult to establish another site in the state of Paraná where the authorities can have control of the moral and physical safety conditions” of the former president. In the meantime, the PT politician remains arrested in the Federal Police building.

Militants have been for one year in front of the Superintendence

Since Lula’s arrest, a group of supporters of the former president has remained in a camp set up near the Superintendence. The presence of the militants, who regularly hold acts on behalf of Lula during the day, with their traditional “good morning” and “good night” salutes, has been disturbing the inhabitants of the region.

Tempers in the place have become so strained that the camp was targeted by a shooting attack in April last year. Two people have been injured. Later, militants from the camp blocked streets surrounding the Superintendence, which led the mayor’s office to once again request Lula’s transfer.

In May, a Federal Police chief who lives in the neighborhood broke the camp’s sound equipment and quarreled with demonstrators. Days earlier, local inhabitants argued and there was pushing and shoving due to the high level of noise of the salutes to Lula.

This weekend, militants have prepared a pro-Lula act to mark the anniversary of the PT politician’s arrest. According to the organizers, the idea of the act is to reinforce the vigil already in place next to the PF headquarters in the capital of Paraná, increasing the acts which are already regularly held on mornings, afternoons, and evenings. Caravans from other cities in the country are expected.

Lula has left prison twice in one year

Since he was arrested, Lula has left his special cell in the Federal Police headquarters for two times. The first time was in November last year, when he was questioned regarding the Atibaia ranch lawsuit by judge Gabriela Hardt, who replaced former judge Sergio Moro when he became Justice minister in Jair Bolsonaro’s government. The second time was in early March, when he obtained an authorization to attend the funeral of his grandson, 7-year-old Arthur Araújo da Silva. The former president was at the site for one and a half hour, and was not able to leave the room destined to the funeral and cremation ceremonies. He was also not able to talk to supporters who were waiting for him outside.

In January, Lula had requested a legal authorization to attend the funeral of his brother, Genivaldo Inácio da Silva, AKA ‘Vavá’, but the request was denied by the Federal Police, judge Carolina Lebbos, and the 4th Region Federal Regional Court (TRF-4), claiming security reasons.

Federal Supreme Court (STF) justice Dias Toffoli authorized Lula to attend the funeral, but the decision was only issued when the funeral was already underway in São Paulo. Still, the justice authorized Lula to meet his family, but the PT politician declined to leave prison, since his family members had already purchased plane tickets to visit him on the following day in Curitiba.

As well as the triplex lawsuit, Lula has already been convicted by Operation Car Wash in the process involving his Atibaia ranch. He was convicted in the first instance by judge Gabriela Hardt for 12 years and 11 months in jail for corruption and money laundering.

The PT politician is also awaiting a conclusion on the lawsuit involving the buying of real estate by Odebrecht for the former president. The process is ready to receive the first-instance sentence.