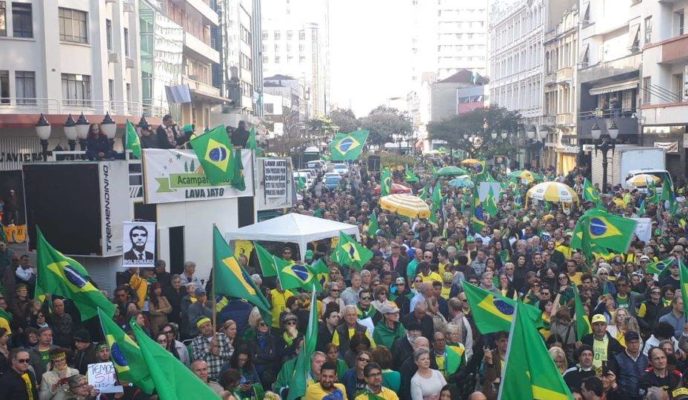 Protests were held in more than 80 cities throughout Brazil, in a show of support to Justice minister Sergio Moro and the Operation Car Wash, and to oppose the Abuse of Authority bill, currently being discussed in Congress. Actress and writer Fernanda Young, author of several books and known by the public for her several successful TV shows, died at the age of 49 after a severe asthma attack. Several artists have expressed their condolences on social media. In an unprecedented move, a referee stopped a Brazilian national soccer championship match after supporters of one club began chanting homophobic slurs against their rivals. French president Emmanuel Macron answered comments made on Facebook by his Brazilian counterpart, Jair Bolsonaro, describing them as sexist, sad, and extremely disrespectful, and said that Brazilians need a president who is worthy of them. Finally, United States president Donald Trump dismissed allegations made by an internet news website that he had suggested nuking hurricanes to prevent them from reaching US shores.

On Sunday, protests were held in at least 83 cities throughout Brazil against the recent Abuse of Authority bill, which has been sent to Congress, and in support of Operation Car Wash and Justice minister Sergio Moro. Among other items on the agenda of the movements which called the protests were also the appointment of prosecutor Deltan Dallagnol, coordinator of the Operation Car Wash taskforce, to the office of Federal Attorney General, the transfer of ex-president Luiz Inácio Lula da Silva to a penitentiary, and the impeachment of Federal Supreme Court president, justice Dias Toffoli.

Actress, writer, and TV host Fernanda Young died on Sunday at the age of 49. According to O Globo, she had an asthma attack, followed by a respiratory arrest. The artist was spending the weekend at a ranch in the city of Gonçalves, Minas Gerais, when she began to feel ill and was rushed to a hospital, where she died. Young published 14 books, and wrote several successful TV series, some of which with her husband, Alexandre Machado, with whom she had three daughters and one son. She also acted in several miniseries and hosted shows on cable TV, and was nominated twice for the International Emmy Award for best comedy series. Several actors and writers expressed their grief on their social media accounts.

Referee Anderson Daronco stopped a match between Vasco and São Paulo, for the Brazilian national soccer championship, after supporters from the Rio de Janeiro club began to sing homophobic chants against their São Paulo counterparts. At the 19th minute of the second half, when Vasco was winning by one to nil, Daronco halted the game and approached Vasco manager Vanderlei Luxemburgo to ask him to intercede with the crowd in order to stop the chants. Last week, the Sports Justice Superior Court, STJD, instructed referees and clubs that homophobic demonstrations in stadiums may result in fines or even the punishment of the club, with the loss of championship points.

On Monday, French president Emmanuel Macron answered a remark made by Brazilian president Jair Bolsonaro, who had endorsed a sexist Facebook comment against his wife, French first lady Brigitte. Macron said that the remark had been “sad” and “extremely disrespectful”, and added that Brazilians “deserve a president worthy of them”. On Saturday, a Facebook user posted pictures of both Bolsonaro and Macron with their wives, with the caption: “Now do you understand why Macron is going after Bolsonaro?” Bolsonaro’s official Facebook account then commented on the post with a laugh, and asking the user “not to humiliate” Macron.

Trump denied having suggested to “drop nuclear bombs” on hurricanes

United States president Donald Trump denied having suggested to his advisors that dropping nuclear bombs on hurricanes could prevent them from reaching his country, contradicting a report posted on news website Axios on Sunday and republished by several international media outlets. In a tweet posted today on his official Twitter account, Trump described the statement as “fake news” and said the idea was “ridiculous.” According to the Axios report, Trump had suggested “dropping a nuclear bomb” on the eye of hurricanes to nuke them before they could reach US shores.