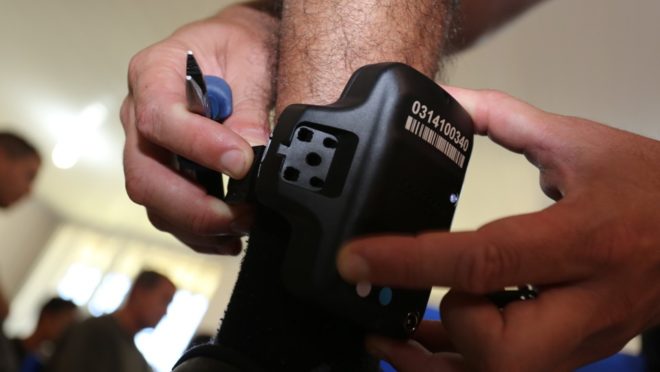 Governor Carlos Massa Ratinho Júnior (PSD) signed last week a decree regulating the compulsory requirement of inmates in the state of Paraná to pay for the electronic ankle bracelets they were, and expenses for the eventual repair or maintenance of the equipment. The measure has been criticized by public security experts interviewed by Gazeta do Povo.

Throughout the state, approximately 7 thousand convicted felons wear the monitoring equipment. The government calculates that this charge will generate an economy of R$ 1.7 million per month to the public coffers, considering the monthly cost of R$ 241 of every anklet. The decree regulates state law 19,240, approved by the Legislative Assembly, and sanctioned by former governor Beto Richa (PSDB) in 2017.

Rules and procedures for the payments will be published soon in a document drafted jointly by the Penitentiary Administration and Public Security State Secretariat and the Paraná Justice Court, according to the state government.

For attorney Rui Carlo Dissenha, a professor of Law at the Federal University of Paraná (UFPR) and penal law expert at the International University Center (UNINTER), charging for ankle bracelets is an “innocuous and populist measure”. Only a minority of inmates would be able to pay for the equipment, claims the jurist. “From an economic point of view, the advantage for the state is extremely small,” he says.

President of the Community Council of the Curitiba Region, attorney Isabel Kugler Mendes says she is “totally opposed” to the charges. “The electronic ankle bracelet is an instrument of penal execution used by the state; it does not belong to the convict,” she argues. “If an inmate is transferred to the semi-open regime, it is due to the sentence progression he underwent.”

For her, the use of the electronic ankle bracelet on itself happens due to a flaw of the state, which does not provide the adequate structure for sentences to be served in open and semi-open regimes. “The law does not establish the use of ankle bracelets. If the state ruled that the convict will be sent out into the streets instead of keeping him or her in an open-regime penal institution, it is required to provide the instruments for that sentence execution,” she argues.

The decree establishing the charge establishes that inmates who are able to prove they cannot afford the equipment’s acquisition and maintenance costs, they will be exempted from the payment. The law also establishes that it will be up to the judiciary to exempt him from these charges, benefitting from gratuitous legal assistance. At the end of their fulfillment of restrictive measures, convicts should return the device in perfect using conditions, without any financial losses to the executive.

For the representative of the Curitiba Region Community Council, convicts which are able to pay for the device should have this charge established in their sentences. “The state is sticking its nose where it shouldn’t be,” she says.

Dissenha considers the law and the decree regulating the matter unconstitutional, and believes that they will soon be challenged by legal actions. “There is a great risk of creating an extra requisite to free the convict, which is an absurdity that escapes reason.”

Gazeta do Povo was not able to get in touch with DEPEN (Penitentiary Department) on Tuesday (9) afternoon. When it published the signing of the decree, Paraná state’s government National News Agency (AEN) informed that the value obtained with the fee will be destined to the Penitentiary Fund, “to invest in penal institutions and in penal assistance programs.”

Similar initiatives have been approved in other states, like Rio de Janeiro, where inmates may buy their own electronic ankle bracelets so they can serve house arrest. In Mato Grosso do Sul, a bill establishing the charge of fees from inmates to pay for the equipment was approved by that state’s Legislative Assembly, but was fully vetoed by governor Reinaldo Azambuja (PSDB) in 2017. In his justification, Azambuja said there was an “unconstitutionality vice”, since it was up to the federal government to legislate on penal and processual law.

In the Federal Senate, a 2016 bill by senator Paulo Bauer (PSDB-SC) which establishes the same measure has been approved by the Justice and Constitution Commission, and sent to the Lower House, where it is being discussed by the Finance and Tax Commission. In a public consultation in the Senate’s website, its score was 1,381 favorable votes and 34 opposed to the initiative.