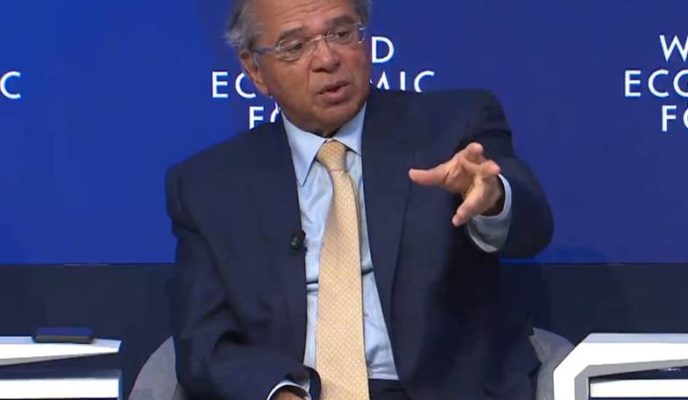 Brazilian Economy minister Paulo Guedes represented Brazil at the 2020 World Economic Forum, and emphasized the need for labor reforms. Meanwhile, Switzerland has accused the Russian government of trying to use the event as an opportunity to deploy at least one spy, and has arrested two men. The Brazilian National Journalists’ Federation has condemned the decision made by the country’s Federal Prosecution Office of charging investigative journalist Glenn Greenwald with the crimes of conspiracy and wiretapping. A U.S. Navy ship has been detected near the Venezuelan coast, according to a news website; meanwhile, former soccer star Diego Maradona is currently in Caracas, showing his support for the government of Nicolás Maduro.

Brazilian Economy minister Paulo Guedes is Brazil’s main representative at the 2020 World Economic Forum, in Davos, Switzerland, since president Jair Bolsonaro, who gave the opening speech of last year’s edition, decided not to attend the event. In a panel discussing Latin America’s current economic background Guedes compared Brazil to a whale that has been harpooned for years, and said that the current government’s mission is to remove these harpoons and prevent the whale from dying. The minister emphasized the social security reform which has already been approved by Brazil’s Congress, and the need to reduce privileges granted to public servers when compared to private workers.

Swiss authorities have frustrated an alleged espionage operation by two intelligence agents from Russia at the World Economic Forum being held in Davos this week. According to a report by Swiss newspaper Tager Anzeiger, the operation was unveiled by Switzerland’s police authorities during an investigation in August 2019; at least one of the two men involved in the plot presented himself as a plumber, and both presented Russian diplomatic passports during a routine passport check, but were not registered as diplomats in the country.

The Brazilian National Journalists’ Federation released a statement condemning the decision made by the Federal Prosecution Office of charging U.S.-born journalist and The Intercept founder Glenn Greenwald for the crimes of conspiracy and wiretapping. In its official statement, the federation stated that “regrettably, the Federal Prosecution Office ignored the Brazilian Constitution, which ensures the freedom of the press,” and maintained that “the journalist fulfilled his professional duty of disclosing information in the public interest.” The federation also warned against the danger of using lawsuits as a way to intimidate journalists.

U.S. Navy is near Venezuelan coast, according to websites

A United States Navy ship got close to Venezuela’s coast on Tuesday, according to websites which track the movement of vessels in the region. According to these websites, a U.S. ship maintained a distance of 49 kilometers from the coast of Caracas, and a Venezuelan coast guard came close and sailed next to the ship during the night. The information has been released by the Conflict News Worldwide website, which informed that the ship mentioned is USS Detroit, on its way to Colombia to hold military exercises with that country on Thursday.

Former Argentinian soccer legend Diego Maradona traveled to Venezuela, where he met with dictator Nicolás Maduro on Tuesday evening. Maduro posted online a video of his meeting with the former player and coach on his social media accounts: “What a joy to see Maradona once again in our beloved homeland. Venezuela is your home, soul friend and brother. Welcome,” said the dictator. Maradona has been a long-standing defender of left-wing regimes, and has publicly expressed his support both for Maduro and his predecessor, Hugo Chávez.