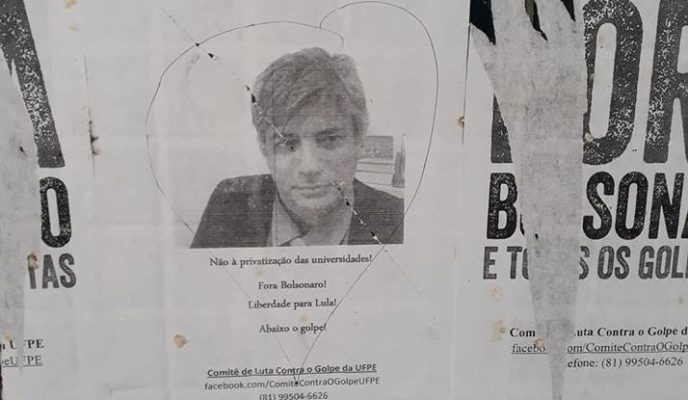 In the afternoon of December 7, 2016, a Wednesday, Ramon Lima dos Santos spent three hours locked in a room, threatened by hundreds of people who were knocking at the door, demanding him to come out and listen, in silence, a lecture against his ideological positions.

The power in the place was cut and rocks were stacked around the room. Santos was a Philosophy professor at the Federal University of Piauí, and had entered around 2 pm the university’s administration office asking for help: the classroom in which he was scheduled to teach was surrounded by demonstrators.

When the group learned about the professor’s location, they headed straight to the administration’s office. Inside, as well as the victim, there was a fellow female professor, the vice-director of the Humanities and Letters Center, some employees, and a lady with a seven-year-old child. “We locked ourselves in, and they began to pound on the doors, which were made of metal, and made a lot of noise. The child began to cry, and one of the demonstrators shut down the power in the room, in the middle of a December afternoon, under the heat of Teresina,” he remembers – it is the first time the professor has spoken about what happened.

Born in Teresina, Piauí, graduated in Law with a Master’s Degree in Philosophy obtained in that same university, Ramon Lima dos Santos became a substitute teacher in the second semester of 2015. He says he entered the radar of the militants after a congress held in the university’s auditorium, entitled “Conservativism and Culture”. “The event was held on the Friday before their attack. I was at the audience. The militants gathered outside, and tried to break into the event. Some people, including myself, stood up and tried to hold the door. Until we couldn’t hold them off anymore, and they entered the room and marked a few of the people present there, including me.”

Afterward, the professor claims, the militants went after his social media. “They began a defamation campaign. They would call me a fascist, a racist, a homophobe. A particular student wrote a long text which was almost a rallying-cry for militants to take up an attitude against me.”

On the Wednesday in which he was the victim of incarceration and threats, the professor had to call, from the room, the Federal Police – the only police force authorized to enter federal universities. “The Federal Police spent a lot of time talking to the demonstrators. In the meantime, the press arrived, and they threatened the reporters.” One professor, coordinator of the Philosophy course, entered the room to present the group’s demands. “They wanted me to step down from my work, and accept to stand outside, without uttering a single word, listening to everything they wanted to say to me. They wanted some sort of public expurgation. I would be humiliated. It was a situation that would begin in screaming and spitting, and might end up in a lynching.”

The professor refused, and after each of the people in the room was authorized to leave, he ended up being escorted into a Federal Police vehicle. “I left wearing a bulletproof vest, surrounded by officers, running down low, under a rain of spit. The vehicle had a difficult time leaving, because dozens of people surrounded it.”

A similar persecution, in another institution, against another education professional, happened last year in Recife. Two days after the first round of the presidential elections, in a Tuesday, October 9, a group of students held, within the facilities of the Federal University of Pernambuco (UFPE), in Recife, the exhibition of the movie “Bonifácio”. At the end of the session, Rodrigo Jungmann, a Philosophy professor who had booked the room where the event was held, went out into the cafeteria, to eat a snack. “I never got to eat,” he remembers. “The cafeteria was surrounded by around thirty students, and the university guard told me they weren’t able to guarantee my physical integrity, and they would escort me to my home.”

It was the pinnacle in a series of incidents which began in 2016. Through these years, the professor had often been harassed. He had to use his own money to put bars on the doors and windows of his house, since the place had a break-in, in that same year. A computer was thrown to the ground, and his walls were paint-sprayed with graffiti that read “Shitty Bourgeois” and “Stalin didn’t kill enough people”.

Right now, several posters hang around the university campus calling the professor a “privatary penguin” – an ironic accusation that Jungman would allegedly be a pre-candidate to the office of UFPE dean in this year’s elections. “I am not, and have never been, a candidate to dean. I am in favor of privatizing, but I don’t have any intention of running for office. If I’d run, they would harass me; if I don’t run, they will say they won,” he says.

A university professor for ten years, Jungman began to teach at UFPE in 2012. “I’ve worked in silence until, in 2015, I began to post conservative content in my Facebook profile. In May 2016 I supported an event on cultural Marxism, and the Left harassed me.” A discussion on feminism was interrupted by a female professor and a group of students.

In October, he was harassed when he defended the Escola sem Partido (“Non-Partisan School”) project, in Caruaru. “When I criticized Paulo Freire, a professor removed the microphone from my hand, saying he would not admit any criticism of Paulo Freire in that institution.” As he left, his car was surrounded by more than 100 people calling him “fascist”. Regarding the breaking-in of his room, the professor complains of a lack of support: “the dean’s office was completely silent, there was no solidarity.”

The cases of Ramon Lima dos Santos and Rodrigo Jungman confirm: it is not easy to be a right-wing professor in Brazilian federal universities. It was also what a professor in a federal university at the Centro-Oeste region found out when, at a given point in his career, he decided to run for dean. Suddenly, students from other classes interrupted his classes, asking him why he intended to privatize the Medicine course – it was a lie. “It was no use for me to deny. The students of medical courses massively voted for other candidates,” claim the professor. The attacks continued.

“They spread rumors that I used to beat my wife. Such attacks offended me personally, and left marks in my professional image even after the elections,” he says. “And this low, lying attitude, came out of the university environment, which should lead the way in terms of ethical behavior.” The candidate was not elected, and asked the Civil Police to investigate the attacks against him spread throughout the social networks.

“Within the university, those who have a conservative thought do not feel free to express themselves, not even in their own social networks,” he claims. “Disagreeing with the majority means losing funds for research projects, missing out on scholarship grants, losing friends.”

Cases of internal persecutions motivated by ideology are commonplace. Professors interviewed by our news team claim that, in order to obtain funds, a laboratory space, or even finding supervisors to produce a post-graduate thesis. A professor at the University of Brasília was targeted by a student who was acting, according to him, under the guidance of the directing board. “He presented me a work, and I asked him to restructure it, since it was made up of copies of other works. I explained to him that it was a crime to steal the text from other people.”

On the following day, on the appointed time to meet the professor, the student never showed up. He had already gone to the professor’s superiors to complain about him. “I went to see the director, and she told me she had transferred me from that class,” he remembers. He complained about the student in a collegiate meeting, and what he said there ended up being used against himself in a lawsuit. “He sued me for slander and defamation. In the lawsuit, he said the director had counseled him to claim I had abandoned the student.”

“I have no choice”

Last year, a History teacher at a high school went through an embarrassment after she showed her support to Jair Bolsonaro in a social network. “I only speak about politics during class when necessary. I never discussed the elections, but the students saw that I had declared my vote in the social media,” she remembers – another case of a professional who chose not to be identified in the report.

“In a specific classroom, students covered an entire wall with posters saying ‘Not Him’ and ‘Fascists shall not pass’. When I would begin to teach, most of them turned their backs on me.” She once spoke about the importance of freedom of speech, and the disciplinary coordinator used up one of her slots to talk to the students. “The climate improved a little, but was still very tense. Some students showed their sympathy, but discreetly, since they also fear the ideological patrol.”

Out of the five professors interviewed for the report, one of them, Ramon Lima dos Santos, no longer teaches in public universities. “My contract with UFPI ended six months later, and since then I had no other job offers in Teresina,” he says. “I think this situation made it more difficult for me to find work. Not only educators talk among themselves, but we also know that, in the education sector, professionals have an ideological bias. And people simply are not looking for trouble.”

In order to remain in class for another semester before his contract ended, the professor had to deal with internal pressures – and a constant defamation campaign. “They wanted me to resign, but I remained until the end of my contract. And the accusations kept coming,” he says. “In the following semester, freshman female students who never even knew me came up to me saying they knew I was the professor who had raped students.”

Since then, Santos, who declares himself a student of philosopher Olavo de Carvalho, has been developing and ministering courses. He sued some of the students who posted offensive texts against him, as well as the university, for not providing him a safe work environment. “This kind of things only exist due to the complicity of a significant part of the teaching body and the university administration,” he says. “It is not only an issue of permissiveness, but of the encouragement of an aggressive and permanent militancy within the institution.”

Another professor interviewed is just waiting for his minimum retirement date. “I have no more motivation to go to work,” he says. The others are still in their jobs. Jungman, for instance, says he would rather stick to his ideological stance, and will continue to teach. “At the moment, I have no other option. Teaching is my livelihood.”

Gazeta do Povo tried, in March, to interview current Education minister Abraham Weintraub, who was also persecuted by the Left when he was a teacher at UNIFESP. Adverse to interviews and the press, he opted not to tell his story.

His colleagues say that Weintraub’s problems began when then-congressman Jair Bolsonaro posted on Facebook, on November 13, 2017, a text of the professor defending the independence of the Central Bank.

Weintraub was sued by professors and students, and fired back. “He hit them back, hard, suing them all, he won’t take anything lying down”, said a friend.