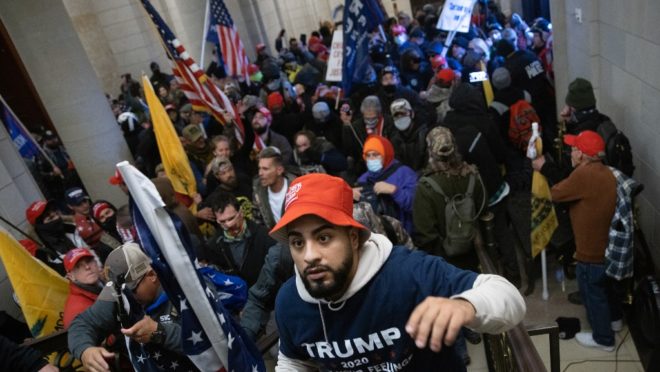 Unthinkable scenes were seen yesterday at the United States Capitol, after supporters of president Donald Trump broke into the building during a session in which members of Congress were expected to confirm Trump’s loss in this year’s presidential election to his Democrat rival, Joe Biden. At least one person died during the ensuing clashes with the police and local security officers. Brazilian president Jair Bolsonaro halted all purchases of syringes due to a spike in prices, precisely at the moment in which the prospect of vaccines against COVID-19 arriving in the country is increasing. Meanwhile, researchers from the University of São Paulo have been surprised after identifying 17 mutations of the new strain of the novel coronavirus first identified in the United Kingdom, which had two cases already detected in Brazil. The government of Germany has decided to extend a national lockdown and implement measures such as a mandatory quarantine and testing on visitors from abroad, in order to try to curb this new strain. Finally, dozens of pro-democracy militants have been arrested by the Chinese government in Hong Kong, accused of violating the controversial national security law approved last year.

The Congressional ceremony set to confirm the new president of the United States was marred by tragic and unexpected events, making this January 6th, 2021, a date that will be permanently mentioned in the country’s history. During a session to tally all Electoral College votes and officially certify the result of this year’s US presidential elections, protesters supporting defeated reelection candidate Donald Trump clashed with security officials and broke into the Capitol building, forcing representatives and senators to flee the premises, and rummaged through the building’s main hall and the offices of several congressmen. The episode, which has been widely criticized throughout the world, has left a stain in that which was long considered to be the most solid democracy in the world. Accused of inciting supporters to take action against what he views as “electoral fraud”, Trump could be held legally accountable for the consequences of the incident. At least one person died after being shot by local security forces, and others were wounded. Several Republican politicians have distanced themselves from Trump, including vice-president Mike Pence.

Bolsonaro halts syringe purchases until prices “come back to normal”

Brazilian president Jair Bolsonaro said yesterday that the purchase of syringes by the federal government to be used for vaccines against the novel coronavirus has been suspended until their prices “return to normality”. During a post published on his social media accounts, the president claimed that state and municipal authorities already have a stock of syringes available to begin the COVID-19 vaccination process, and since prices have allegedly surged since the Brazilian Ministry of Health manifested its interest in purchasing the product, a decision was made to suspend the purchase for the time being. On Monday, the Brazilian government restricted the export of syringes and needles manufactured in the country, establishing that any sale of such products would require a “special license”, and also removed any taxes on the import of this material.

Brazilian researchers have identified one of the factors which make B.1.1.7, the new strain of the novel coronavirus, even more contagious. The strain has been identified for the first time in the United Kingdom, and two cases have already been confirmed in Brazil by the Adolfo Lutz Institute. Through the use of bioinformatics tools, scientists have been able to discover that the spike protein of this new viral strain – which forms the crown-like structure that gave the virus its name – is responsible for establishing a stronger molecular interaction force with the ACE2 receptor, present on the surface of human cells, to which SARS-CoV-2 attaches itself in order to cause infections. The study was held at the Ribeirão Preto campus of the University of São Paulo’s School of Medicine and Dentistry. Researchers were surprised with the rapid molecular evolution of this new strain, which generates 17 mutations, eight of them located in the gene responsible for coding the spike protein on the surface of the virus.

German chancellor Angela Merkel declared on Tuesday that the country will extend its national lockdown until the end of January, in order to try to curb the spread of novel coronavirus infections. She added that Germany will deploy harsher restriction measures on its borders, such as mandatory testing on people who come from regions especially affected by COVID-19 and a five-day quarantine. “We need to restrict contact more strictly. (…) We ask all citizens to restrict contact to the absolute minimum,” Merkel told journalists after meeting with the leaders of Germany’s 16 federal states. Despite having already begun its vaccination program, the country is being criticized for not keeping up with other European countries.

At least 53 people, among them pro-democracy activists and former legislators, were arrested on Wednesday morning in Hong Kong after being accused of “subversion” and allegedly violating the recently-approved and controversial national security law imposed by the Chinese government last year. This mass arrest is the biggest act of repression in the former British colony since the law was made effective, in June. The government claims that all the arrested were part of a plot to overthrow the local government. A Hong Kong police spokesman said the operation involved a thousand police officers, and arrested 45 women and 8 men, aged between 23 and 64, and 72 places were searched, with a total of US$ 206 thousand confiscated in funds destined to the local primary elections.