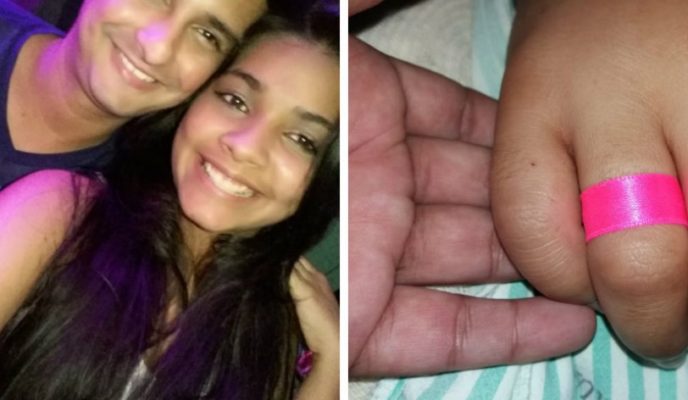 Couple planned to get married at the end of the year, and due to the health state of his girlfriend, Ralide Mourão decided to ask the consent of her parents and realize their dream

30-year-old Ralide Mourão and 18-year-old Ana Grazielle da Silva had been dating for four months, and planned to get married at the end of 2019, but an accident she suffered at her home in late January ended up changing the couple’s plans. A structure of her bathroom collapsed on top of Ana Grazielle while she was showering, and she was hospitalized. Faced with the gravity of the situation, Ralide decided to maintain their commitment and proposed her in the Intensive Care Unit.

The couple met in the school where Ralide and Ana Grazielle’s mother work, and were friends until two years ago, when they started to go out. “Every afternoon she would go and help her mother. We spent every day together, and planned to get married in late 2019. When the accident happened, I was the first person she called for,” Ralide told Sempre Família.

Ana Grazielle was taken to the emergency room still conscious, with injuries in his arms, legs, and head. But she had to undergo a procedure in her left arm, and then suffered three cardiac arrests. A few days later Ralide was informed that she had brain death. He then decided to go on with the engagement plans of the couple.

According to him, the intention of getting married this year still hadn’t been presented to Ana Grazielle’s family. That is why when her condition worsened, Ralide asked the consent of her parents to get engaged, right then and there, at the hospital. “I went there with a preacher to bless the moment, and brought with me the music we had chosen for the ceremony, Rosa Azul, of the band Novo Som,” he said.

Ralide explained he placed a headphone on her head and another one on his own, so they could hear together the song they liked. “When I heard the song I could feel her heart beating faster. That was proof that she was saying ‘yes’ when I proposed to her and we listened to the song,” he remembered. Since Ana Grazielle could not wear any metal objects inside the hospital, he placed a band around her finger in place of the wedding ring.

Unfortunately, however, before the publication of this text, Ana Grazielle died. It happened on Friday, February 8, after nine days in the ICU at the Hospital do Juruá, in Cruzeiro do Sul, Acre. Ralide’s plans from now on include getting closer to the family of his bride. “They adopted me as a son, because they saw my dedication and effort so that, above all, a beautiful love story could happen,” he explained.

Another decision taken by him is in the spiritual realm. “I want to reach out for God more often, and let him guide me, so I can realize and take the correct decisions in my life,” he said. “I believe she will be taking care of me from up there,” he concluded.