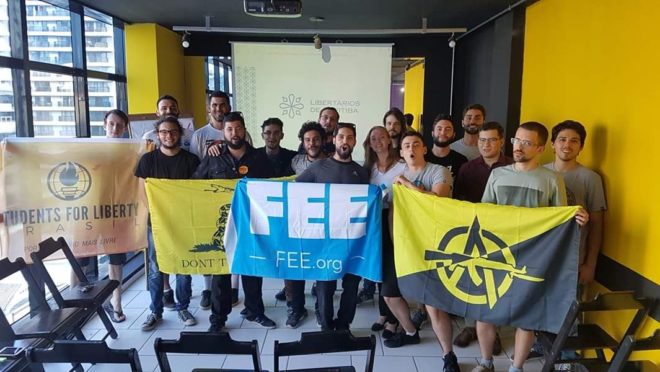 Dominated by left-wing students for at least six decades, the Brazilian academic environment was been witnessing the exponential growth of young people with a completely different way of thinking. The wave of self-proclaimed right-wing and liberal students is not new, but has been growing sensibly, boosted by conservative groups which showed their strength in last year’s elections.

For Dennys Xavier, professor at the Philosophy Institute of the Federal University of Uberlândia (UFU), until 2016 these right-wing groups of university students lived were ostracized, thanks to the numerical superiority of professors and points of view aligned to the left-wing way of thinking. Added to that, in his opinion, the economic crisis aggravated during Dilma Rousseff’s (PT) second term in office, caused a “shock of reality” regarding the statist model which prevailed in the country. The social media became a meeting point.

“Right-wing groups have always existed in some degree of organization, but they were still incipient within the universities, in a state of ostracism. The elections catalyzed that, and the social media played a fundamental role, because with them those who defended freedom and the right saw that they were not alone. There was a reassertion of this trend, and this movement was insufflated. Suddenly, the right-wing boy was not alone in the classroom,” he remarked.

Gazeta do Povo interviewed members of eight university organizations self-declared antagonistic towards left-wing groups in several learning institutions throughout the country. The statements of their leaders have common traits, such as, for instance, having appeared after the rise of the conservative movement. While six of them appeared in 2016, during the municipal elections, two other appeared in 2018, when the polarization between left and right-wing groups became more intense.

One of the most traditional of these groups is UFPR Livre. Created in 2016, it currently has more than 60 members. To join, the university student must undergo a selection process so that the group’s directing board may find out if the candidate is aligned with the “end, principles and values” of the group, according to 34-year-old Bruno Kaiser, one of the founders of the movement.

“The main motivation [to create UFPR Livre] was the need to offer an alternative to students who did not feel themselves represented by progressive currents within the university. We understand that the university environment should be characterized by a plurality of ideas,” completed Kaiser, who is studying Accounting.

At UNIFAL, in Minas Gerais, the decision to go on strike taken in September 2016 by the Central Students Union (DCE) became the trigger for the appearance of this right-wing youth. One of its founders, 25-year-old Vinícius Albano, says that this strike movement prevented other students from attending classes. This caused the creation of UNIFAL Livre’s Facebook page, to present an ideological opposition against the DCE.

“The group eventually aggregated students more aligned with a political center-right axis, but mainly liberals and libertarians of all four UNIFAL campuses. The movement grew and become stronger, eventually creating an identity pro-individual and economic freedoms,” he stressed.

The social media have also become the channel for the creation of UERJ Livre. According to one the group’s members, 21-year-old Gabriel Silva, “a group of UERJ students, professors and intellectuals who were tired of the actions of left-wing political parties created a Facebook group called UERJ Liberal,” in 2016. With time, and the adhesion of more people, a deliberative council was created to act politically within the campuses of the university.

At the State University of São Paulo (UNESP), the strike initiated by some students against the Constitutional Amendment Bill (PEC) of the Spending Ceiling, in 2016, caused a reaction among right-wing students.

“We appeared during the 2016 attempted strike. We were tired of long strikes, and could not stand anymore having to go home and remain four months without studying, only to return and have to study everything in a hurry, in one week, to take an exam. We are liberals, and our proposal is to decontaminate UNESP,” remarked 25-year-old João Felipe, one of the founders of UNESP Livre.

Banners: the individual at the center, and less state

Adepts of economic liberalism, the university right-wing groups defend an increasingly smaller presence of the state in the life of the individual.

According to philosopher Dennys Xavier, the centrality of the individual is a trademark of the pillars which support the ideals of these right-wing groups, who usually congregate students of liberal professions such as medicine, law, economics, etc.

“These courses have a strong interface with a reality which the humanities try to push away, which is the reality of capital, profit, work, effort, and market. These are courses that offer a ‘shock of reality’, which interferes with the profile of both those who finish and those who begin to study them. That doesn’t mean that there are no statists there, because we are talking about a 30-year process. But these courses are more permeable. The doctor doesn’t care if Marx is right or wrong, he wants to open his practice and make money,” he remarked.

At the University of Campinas, for instance, right-wing students maintain that the institution should establish partnerships with the private sector in order to obtain more benefits, both for the institution and for the students themselves, as well as providing more transparency in its spending, according to one of its members, 25-year-old Economy student Mateus Valadão.

Less state is also what has been proposed by UEL Livre, at the State University of Londrina. The movement in this northern Paraná institution is one of the most recent ones. It appeared as an opposition, in 2018, to left-wing groups who were running for the administration of the local student’s union.

“Our main banner is economic liberalism. We are not in favor of the privatization of the institution, this is not what we are talking about. We are talking about financing, sponsorship deals, and partnerships with the private sector, which might improve the provision of service on campus. Why can’t we sign a sponsorship deal with a supermarket for the university cafeteria, in order to reduce costs?” pointed out 22-year-old Medicine student and one of UEL Livre’s founders, Dalton Ferreira.

At the Federal University of São Paulo, UNIFESP Livre claims it defends “conscious freedom” and a plurality of ideologies in academic debates. Their position, opposed to historically hegemonic movements within the university environment caused some members of the group to suffer backlashes. For this reason, they chose to answer Gazeta do Povo’s questions through a statement. All other movements also mentioned being repressed by antagonistic groups.

“We defend conscious freedom, understanding that every individual is free to think and act as he chooses, but the academic environment, which we consider sacred, should be respected, since the highly qualified professionals of the future come from there. Students have to understand that a public and academic environment should be respected, well-cared for, and pleasant for everyone, with no exceptions,” pointed out UNIFESP Livre.

Also to oppose the local student’s union at the time, the UFSC Zero movement, from the Federal University of Santa Catarina, has a more specific banner. As well as supporting the right-wing liberal thought, students consider that the union should not be used as a stage for political parties. “The DCE should serve the students, and not political or partisan interests,” summed up 23-year-old academic Yago Messias, who is studying Production Engineering.

Even though right-wing groups consider themselves nonpartisan, in the 2018 elections their members were free to act in political campaigns. João Amoedo (NOVO) and Jair Bolsonaro (PSL) were among their main preferences in the first and second round of the elections, respectively. The most emblematic case is that of UERJ Livre, who campaigned for free for then-gubernatorial candidate Wilson Witzel (PSC).

The main intellectual sources of inspiration for the right-wing youth are the classical liberals, who appeared in the 18th century but gained momentum during the 20th century as a reaction against Communism and Nazism, lines of thought that seek an increasingly bigger intervention of the state on the lives of people.

Among the main authors which inspire these liberal groups in the universities are British economist Adam Smith; Austrian Friedrich Von Hayek, defender of the theory that the more state, the more oppression; Milton Friedman, US defender of the free market; and French author Alexis de Tocqueville.

None other, however, is more mentioned by these groups than Austrian economist Ludwig Von Mises. Considered one of the main authors of the Austrian School of Economics, used to oppose the economic system of Socialism, based mainly on Karl Marx.

“One of the banners of this movement should be to expand the university bibliography in order to include Mises, Hayek, and even Olavo de Carvalho. Why not? What we see is that there is a scenario of omission from the administration of the courses, due to the ideological rigging, which prevents innovations in the curricula,” stressed UFPR Livre’s Bruno Kaiser.

“Our society cannot accept the classical vision of Marxism, because there are other contemporary authors who put forward a new concept of social classes. That point of view was victorious. The classical Marx is no longer fit for our current society (…) Our vision is organicist. We believe that work generates customers, customers generate money, and money is good,” remarked UEL Livre’s Dalton Ferreira.

The preference of the right-wing youth for authors aligned to a though opposed to the left faces a problem in the universities: the lack of diversification in their libraries. A survey made in 2017 by Gazeta do Povo in the libraries of the five main universities in the country revealed a proportion of five literary left-wing titles for every right-wing one.

“Within the university, there is no diversification in terms of reading. One will hardly find anything by Hayek, Mises or Tocqueville. Not that they are not sought by students, but the administrators of these libraries have a left-leaning way of thinking. There’s no balance. Therefore, students must seek these authors elsewhere,” said UERJ Livre’s Gabriel Silva, corroborating the study.

Based on this demand, a new editorial niche appeared in Brazil in the last two years, points out Dennys Xavier – the niche of right-wing and liberal authors. He coordinates the elaboration of a literary collection of texts from classical authors of this ideological line, to be launched soon. The inversion of this advantage of Marxist intellectuals in university libraries will still take a long time to happen, he ponders.

“These groups began to put pressure and appeal to professors, so that more liberal readings are offered to students. But let’s not fool ourselves. This decontamination process will take 20, 30 years. Universities are the last stronghold of the statist left, and it will not surrender easily,” he believes.