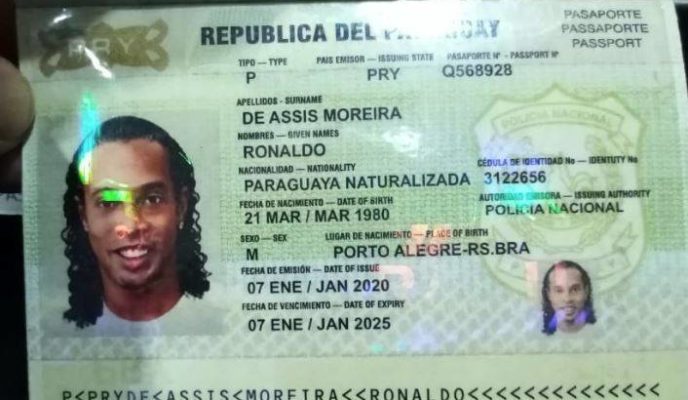 Brazilian soccer superstar Ronaldinho Gaúcho has been arrested in Paraguay, along with his brother and manager, Assis, for allegedly using fake documents to enter the country. The Brazilian Ministry of Health has confirmed the fourth case of the novel coronavirus infection in the country, a 13-year-old teenager who recently came back from a trip to Italy. The US state of California has joined the list of states declaring emergencies after the death of a passenger on a cruise ship off the coast of San Francisco, the first COVID-19 death in the West Coast state. The novel coronavirus outbreak is also being held responsible for the collapse of United Kingdom airline Flybe, which has gone into administration after a significant impact on its bookings. Finally, an article published on the official website of Venezuelan dictator Nicolás Maduro’s party is accusing the government of US president Donald Trump of being behind the coronavirus epidemic, calling it a “biological weapon” being used in the economic war against China.

Ronaldinho Gaúcho is arrested with fake passport in Paraguay

39-year-old former Brazilian soccer superstar Ronaldinho Gaúcho was arrested in Paraguay yesterday, along with his brother and manager, Assis. Ronaldinho, who was in the country to launch a social project for children, along with a book, was detained for using a fake Paraguayan passport to enter the country. Both were taken from the presidential suite of the hotel where they were staying to the Organized Crime Prosecution Office in the capital, Asunción, where, according to head prosecutor Federico Delfino, they claimed the fake passports, along with other fake documents found in their hotel room, belong to other people.

The Brazilian Ministry of Health reviewed its previous decision and decided to confirm the case of a 13-year-old São Paulo teenager, who returned from Italy, as the country’s fourth case of coronavirus. The girl tested positive for the virus, but did not show any symptoms such as fever or respiratory issues, and therefore was not classified in the definition of COVID-19. Brazil so far had three confirmed cases, along with 500 suspected instances. Even though the teenager is still asymptomatic, she and all people close to her are being closely monitored.

The state of California has joined the list of states declaring emergencies as the novel coronavirus spreads throughout the United States. Governor Gavin Newsom made the announcement after the first death caused by COVID-19 in the West Coast state, which raised the number of fatalities to 11 in the country. The victim was a 71-year-old man with pre-existing health conditions, and was attending a cruise which went from San Francisco to Mexico last month, on which 11 passengers and 10 crew members are suspected of having contracted the disease. The US Coast Guard rushed testing kits to the cruise ship.

United Kingdom regional airline Flybe has gone into administration and faces doubts over its future, amid uncertainties about a rescue loan. The company had been facing difficulties since January, and the impact of the COVID-19 dissemination on its bookings finally caused its collapse. Flybe flew passengers from the UK to all European major destinations, employed 2.4 thousand people, and transported around 8 million passengers each year at 81 airports and 68 airplanes.

An article published last Monday on the official website of dictator Nicolás Maduro’s United Socialist Party of Venezuela implied that the novel coronavirus could be a biological weapon designed by the United States to use in president Donald Trump’s economic war against China. The article was signed by Hugbel Roa, a one-time minister of Maduro’s government. “The implementation of biological wars by the US should come as no surprise to anyone. Through the years, they have been using this resource as a weapon of world domination and enrichment of their main allies. The main interest of the great pharmaceutical and economic hegemonies is to keep increasing their profits at any cost,” read the text.