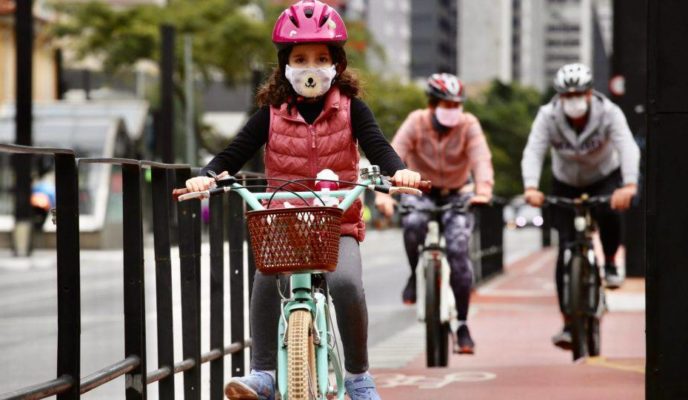 The governor of the Brazilian state of São Paulo, João Dória, has announced the reopening of the state’s economy, which will be done in gradual stages, but did not rule out the possibility of an eventual lockdown if the number of COVID-19 cases begins to rise. Brazilian vice president Hamilton Mourão has ruled out any possibility of a military coup in the country, after president Jair Bolsonaro’s son, congressman Eduardo Bolsonaro, declared in a live broadcast on the internet the need for a “moment of rupture.” The city of Florianópolis, capital of Santa Catarina, has managed to effectively control the novel coronavirus pandemic, with only seven registered deaths, and is being seen as a positive example amidst the devastating effects caused by the disease in the rest of the country. Israeli prime minister Benjamin Netanyahu offered to help Brazil in the fight against COVID-19, helping in the development of medical supplies and sharing his country’s professional expertise; meanwhile, though, the Israeli embassy in Brasília issued a formal protest asking politicians to keep the Holocaust and Jewish-related issues out of the local political debate, after Education minister Abraham Weintraub compared a Federal Police operation to a massacre committed by Nazis against Jews. Finally, the UK, Australia, Canada, and the US have issued a formal reprimand against the government of China, after the Asian country’s Communist Party approved a controversial national security law to be imposed on the semi-autonomous territory of Hong Kong.

Epicenter of COVID-19 in Brazil, the state of São Paulo will begin a process of easing its quarantine measures, gradually reopening its economy after June 1st. Governor João Dória presented his plan for a “conscious resumption” for the state, which has the highest number of novel coronavirus infections and deaths in the country; the process will be divided into several stages, but the possibility of a lockdown has not been ruled out, should the number of cases begin to rise. “All governmental decisions concerning COVID-19 have been guided by science and medicine. (…) The virus has strongly affected Brazil’s economy, as well as the state which leads Brazil’s economy. (…) This new stage is not a loosening, but a fine tuning, according to our regional needs. And we have technical data to back this safe resumption,” said Dória.

Brazilian vice president Hamilton Mourão declared in an interview with news portal G1 that any possibility of a rupture in the country’s democracy is “out of the question”, and that “there is no room in the world for actions of this nature.” He also minimized statements made by president Jair Bolsonaro’s son, congressman Eduardo Bolsonaro, who mentioned during a live broadcast on the internet the need for a “moment of rupture”. “Who is talking about a coup? The Armed Forces? Are we in the 19th century? (…) What we have today is some stress between the branches of government. I can’t speak for the Armed Forces, but I am a reserve general, I know the Armed Forces: I see no reason for a coup,” he said. When asked about Eduardo’s statement, he added: “He is a congressman, he can say whatever he wants.”

Three weeks with no COVID-19-related deaths: how Florianópolis managed it

Amidst the thousands of deaths caused by COVID-19 throughout Brazil, Florianópolis has stood out as a positive example in terms of controlling the pandemic. Geographically favored for being located on an island, which can only be accessed through a single bridge connecting it to the mainland, the capital of Santa Catarina was one of the first in Brazil to adopt restrictions and mass testing to contain the novel coronavirus. And these measures have been successful: for over three weeks, the number of deaths has remained stable, at seven. With an estimated population of 500 thousand inhabitants, Floripa, as it is commonly called, had until yesterday a total of 691 confirmed COVID-19 cases, of which 592 managed to fully recover from the disease.

Israeli prime minister Benjamin Netanyahu told president Jair Bolsonaro that his country is ready to help Brazil in the fight against the novel coronavirus. The Israeli politician offered cooperation with Brazilian industries in the manufacture of medical supplies needed to deal with the pandemic, as well as establishing a professional dialogue between experts from both countries to convey Israel’s experience in treating COVID-19. The Israeli embassy in Brasília, however, issued a formal statement asking that the Holocaust, the Jewish people and Judaism in general “be left out of the political dialogue” in Brazil, after Education minister Abraham Weintraub compared the recent Federal Police operation to a massacre of Jews in Nazi Germany.

UK, Australia, Canada, and the US criticize China in joint statement

The United Kingdom, Australia, Canada, and the United States, have jointly reprimanded the Chinese government, expressing in a formal statement their concern over the new national security law which the Asian superpower wants to impose on the semi-autonomous city of Hong Kong, approved on Thursday by the Communist Party of China. According to the statement, China’s decision is in direct conflict with its international obligations under the principles of the legally-binding, UN-registered Sino-British Joint Declaration, signed when the British government handed over their former colony to the Chinese administration. The declaration established a system called One Country, Two Systems, designed to protect Hong Kong’s liberties and autonomy.