Fale a língua do mundo. Faça Wise Up.
Mon 23 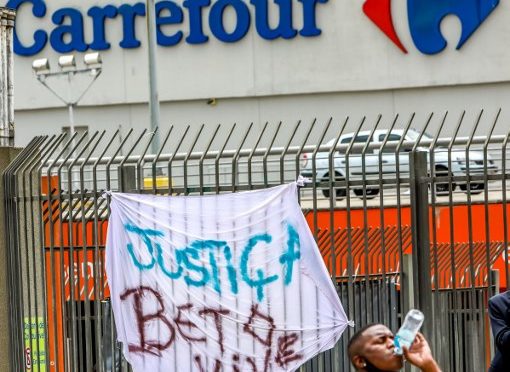 Two security guards who brutally killed a man at a supermarket in Porto Alegre, sparking outrage throughout Brazil and raising the issue of racism in the country, have been arrested and charged with homicide. Researchers in the Brazilian city of Curitiba have identified the novel coronavirus in two dogs in the city, making them the first pets to test positive for the virus in the country. Brazil may have to trash 6.86 million novel coronavirus diagnostic test kits, currently stored at the Guarulhos International Airport, since they may reach their expiration dates before being distributed to the public health system. After a power outage that has been affecting the northern Brazilian state of Amapá for 20 days, president Jair Bolsonaro visited two electrical substations in the region and declared a state of public calamity, confirming financial compensations to the local population. Finally, more Republican Party members have come forward asking US president Donald Trump to finally admit his defeat to Democratic candidate Joe Biden in this year’s presidential elections.

The killing of a 40-year-old black man at a Carrefour store in the southern Brazilian city of Porto Alegre, on the eve of the Black Consciousness Day, sparked outrage throughout the country and even had repercussions outside Brazil. Protests were held outside several stores of the supermarket chain across Brazil, with demonstrators holding “Black Lives Matter” signs, and a store in São Paulo was set on fire. Footage from the store’s security cameras showed the moment in which João Alberto Freitas was violently assaulted by two security guards, one of whom is an off-duty police officer, after he threw a punch at one of them while being escorted outside. Freitas died on the site, allegedly from asphyxiation. The guards had been called after a female worker complained of being threatened by the victim, and have since been arrested and are being investigated for homicide.  The CEO of the French supermarket chain has issued a public statement in Portuguese apologizing for the incident.

Researchers from the Federal University of Paraná have discovered the novel coronavirus in two dogs in Curitiba; one of them is a French bulldog, while the other is of an unknown breed. According to the institution, these are the first positive cases of the virus in pets in Brazil, in a study which analyzed samples from cats and dogs in five different state capitals. Although the researchers recruited tutors who had tested positive for COVID-19, their conclusion was that pets may get infected, but that does not necessarily mean they can contract the disease, or spread it. Both dogs usually sleep in the same bed as their tutors, and showed extremely light respiratory symptoms.

Brazil may have to discard 6.86 million coronavirus tests

The Brazilian federal government may be forced to dispose of 6.86 million novel coronavirus diagnostic test kits, according to O Estado de S. Paulo. The RT-PCR tests, currently stored at a warehouse owned by the government in the Guarulhos International Airport, have cost R$ 290 million and are yet to be distributed to the public health system, though their expiration dates, which range from December 2020 to January 2021, are rapidly approaching. Out of 24.2 million COVID-19 tests scheduled by the government until December, only 20% have been administered by the public system. The Ministry of Health has already inquired manufacturers on a possible extension of the expiration dates; the Brazilian Lower House of Congress has asked for an explanation, and president Jair Bolsonaro has blamed local state and municipal governments.

After the federal government declared a state of public calamity in Amapá, due to the ongoing power outage that has been affecting the northern Brazilian state for 20 days, president Jair Bolsonaro visited the capital, Macapá, accompanied by Senate president Davi Alcolumbre – himself a local. After visiting two electrical substations, Bolsonaro confirmed he will issue a provisional presidential decree which will financially compensate the state for the losses caused by the blackout. In a quick statement, the president said that “we are ready to attend to the state of Amapá”. One of the effects of the decree is to exempt the state population from paying their energy bill for the 30 days which preceded the outage, in addition to several other forms of financial compensations.

United States president Donald Trump suffered a new defeat, after a federal court rejected the lawsuit moved by his reelection campaign team, which contested the victory of president-elect Joe Biden in the state of Pennsylvania. In a 37-page decision, district judge Matthew Brann rejected the last-minute attempt by Trump’s team to file a new complaint of electoral fraud claiming ballots were improperly discarded. After this, several members of the Republican Party have increased the pressure on Trump to finally concede his defeat in the presidential elections and grant a smooth transition of power to Biden. The last two US National Security Advisors, H. R. McMaster and John Bolton, have criticized the president’s behavior; Bolton called Trump “the political equivalent of a street rioter,” while retired general McMaster said the president’s unfounded claims of mass election fraud are “sowing distrust in American institutions”, and “simply playing into the hands of our adversaries.”