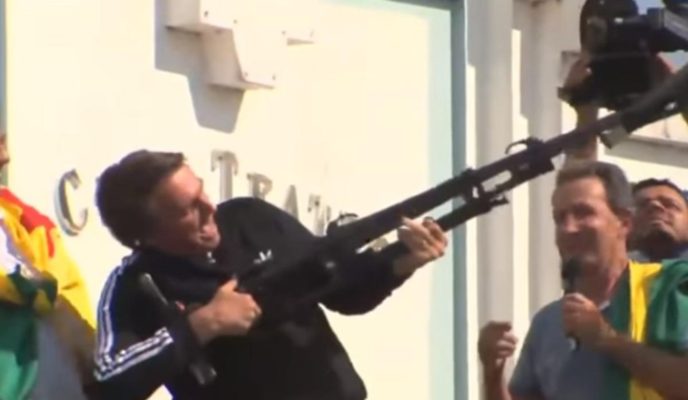 Imagine: a group of Jair Bolsonaro (PSL) voters, with real guns in their hands, surround a group of PT supporters after a fierce argument, in Acre. Emotions are running high. The presidential candidate then yells to the crowd: “Let’s shoot down Acre’s PT supporters!”

Now, check out this video: in a rally, Bolsonaro picks up a camera tripod, and, pretending it is a gun, yells: “Let’s shoot down Acre’s PT supporters!” Afterwards, he says: “We will chase these crooks from Acre!” The difference between both situations is the difference between solicitation and an irresponsible political bravado.

The Workers’ Party, PT (Partido dos Trabalhadores) seems to ignore that distinction, as well as others subtleties of the law, because the coalition “The People Happy Once Again” (“O Povo Feliz De Novo”), formed by PT, Pros and PCdoB, filed with the Federal Supreme Court, STF (Supremo Tribunal Federal) a notitia criminis of electoral defamation (article 326 of the Electoral Code) and solicitation (article 286 of the Penal Code), as well as a complaint for the crime of threat (article 147 of the Penal Code).

The discussion transcends mere electoral quibbling, because it concerns freedom of speech, even if in a very specific context, which the electoral. The right to express oneself is not unlimited, since there are other important values which must be protected – such as the people’s honor and the public peace – why may clash with the freedom to express ideas and opinions, but it is undeniable that freedom of speech gained much relevance throughout the last centuries, consonant to the valorization of democracy.

Back to the case in point, let us analyze it by parts. The crime of electoral defamation consists in “defaming someone, in the electoral advertisements, or with advertising intent, by offending the person’s dignity or decorum”. Although Lula claims to have been transformed into an idea, “petralhada”, the precise term used by Bolsonaro, still have not been transformed into “someone”.

The word is important, because, in order for a crime to happen, someone must defame – offend – a specific person. Semantics matter here, above all, to control the state’s power in the application of penal law, its most powerful legal instrument. The same consideration applies for the crime of article 147 of the Penal Code: “threaten someone, by word, writing or gesture, or any other symbolic way, to cause unjust and grave harm to someone.

The situation gets a little complicated in article 286: “publically inciting the practice of a crime”. The redaction is succinct. That a homicide is crime, no one doubts. But did Bolsonaro really incite the practice of homicide? Right after saying “let’s shoot down Acre’s PT supporters!”, Bolsonaro says “Let’s chase these crooks from Acre!” In a the context of a political rally, one quickly realizes that the candidate is expressing, in his own sweet way, the idea of defeating PT in the elections.

But, in order not to depend solely on good old rationality, people who interpret penal law make use of some instruments. The first step is verifying if there is specific intent, that is, an actual intention of inciting the committing of the crime. Here one can already find reasonable doubts. The second step would be verifying if there is an incitement to the committing of a specific crime: the example at the beginning of this text shows the difference. An incitation would be, for instance, if Bolsonaro said something like “Let’s get out of here and shoot down PT supporters in their Directory! Let’s go to 170 Equador Street!”

It must be said that Guilherme Boulos (PSOL), PT’s official aide-de-camp (and himself a presidential candidate), agreed with the complaint in his Twitter account: “Bolsonaro threatened to shoot his opponents in Acre. In any democracy this jerk would be arrested for incitement to violence, and not running for president of the Republic”.

I will not be rash enough to say that Boulos committed a crime of defamation, because the Left’s “hate speech” is also socially accepted, but it is curious to find out that in the United States Bolsonaro would not be arrested. Maybe Boulos considers that country is not a democracy, unlike Venezuela. In any case, the example of the US is proficuous in this discussion, although the American law have been increasingly shifting towards the side of freedom of speech throughout the 20th century.

In 1969, that country’s Supreme Court acquitted a Ku Klux Klan leader who had incited a revolt against the government based on the idea that “freedoms of speech and press do not permit a State to forbid advocacy of the use of force or of law violation except where such advocacy is directed to inciting or producing imminent lawless action and is likely to incite or produce such action”. The criteria shown here encompasses what we call intent, and also takes into account the probability of this incitation actually producing the crime it intended.

The imminent illegal action standard is a form of reinterpretation of the clear and present danger doctrine, first formulated in the United States in 1919, replacing a traditional principle the American courts had inherited from the English Common Law, and was used to rule on cases which involved freedom of speech: the bad-tendency test, or “killing the serpent in the egg”. The idea, in this case, is that any speech that has the slightest tendency of generating grave harm should not be protected by the constitutional guarantee.

But it is worth noting that the fact that something is not a crime does not make that conduct correct or politically responsible. In a democracy, a robust and vibrant democratic culture is as important as periodic elections and clear rules, crystallized in the proceedings of the rule of law. There are some virtues which are to be expected from citizens who live in a democracy, especially from its political leaders.

First of them is the disposition to the rational dialogue, and the humbleness to know how to be defeated – I know that is hard to put into practice with PT supporters screaming “coup!” in every decision taken by the Judiciary branch, while they embrace the so-called putschists in the state elections, and Ciro Gomes (PDT) saying he will receive Sergio Moro’s gang “with bullets”.

Second: respecting, both in actions and words, the dignity of your fellow man (or woman), given that they are human beings and can never be envisaged as an enemy to be wiped out, even if metaphorically – I know the Left also does it, and not only in metaphors, as the cases of Venezuela and Nicaragua have shown us.

A democracy which transforms itself into a mere formalism of its proceedings or in a mass catharsis is on the path to its downfall. Both extremes can be avoided by the perennial cultivation of an authentic democratic culture, but that cannot be reached by fighting each and every vitriolic political rhetoric under the argument of expanding the use (and abuse) of the penal law. Here is a problem which the civil society would benefit from embracing its solution.