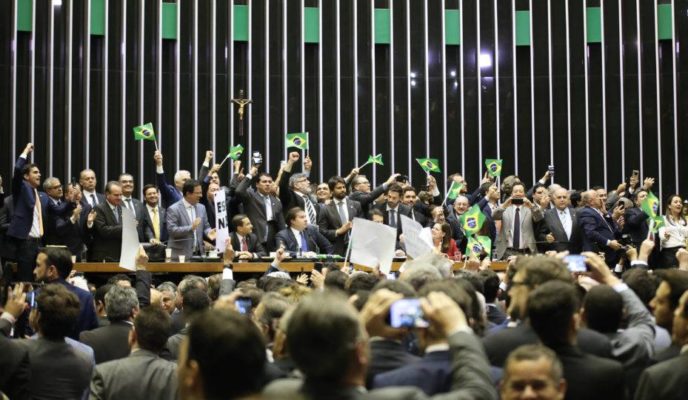 The long-awaited social security reform bill has been approved in the Lower House of the Brazilian Congress. Even though the government is considering it a victory, the debate on the exclusion of certain professional categories from it is threatening to reduce its effectiveness. North Korea responded to the purchase of jet fighters from the US by South Korea claiming it will develop unspecified ‘special’ weapons. Tensions are also increasing in the Persian Gulf, where the United Kingdom claimed one of its navy vessels had to escort an oil tanker to prevent it from being approached by Iranian patrol ships. France has announced it will impose a tax on tech giants operating in that country, and US president Donald Trump ordered an investigation on whether this measure is unfair discrimination against American companies. Finally, a São Paulo-born monsignor was appointed director of the Sistine Chapel choir, after the resignation of its previous director, investigated of fraud and embezzlement at the request of Pope Francis himself.

After two days of fierce debates in the Lower House of the Brazilian Congress, the text of the social security reform bill was approved in the first round of voting by 379 votes to 131. At least 308 votes were necessary for its approval, and the result is being considered a victory for the government. Congressmen will now discuss each specific detail of the bill, considering eventual requests for alteration made by representatives of parties and professional categories. Experts believe that such alterations may significantly reduce the impact of the reform, and may even force a new reform within five or ten years.

The North Korean government criticized its southern counterpart for buying high-technology jet fighters from the United States, and threatened to retaliate by developing unspecified ‘special’ weapons. The Ministry of Foreign Relations issued a statement claiming to have “no other choice but to develop and test special armaments to completely destroy the lethal weapons reinforced in South Korea,” adding that Seoul should abandon the “preposterous illusions that an opportunity will come for improved inter-Korean relations if they follow in the footsteps of the United States.” South Korea confirmed the purchase of forty Lockheed Martin F-35 jets.

Iranian vessels tried to prevent a United Kingdom oil tanker from crossing the Strait of Hormuz, an important sea thoroughfare for the transportation of oil from the Middle East. This is the latest event in an escalation of tensions between Iran and Western countries, after the United States denounced an attempt to kidnap one of its ships by the Iranian Revolutionary Guard. The tanker British Heritage was approaching the entrance to the strait when its naval escort, HMS Montrose, was forced to position itself in front of the tanker and issue verbal warnings to the approaching Iranian ships, which then backed down. Iran denied the accusations.

Today, the French parliament formally adopted a controversial three percent tax on the income of technology companies such as Facebook, Amazon, and Google, whose business models are based on digital advertising. Amidst these growing commercial tensions, the government of US president Donald Trump announced an investigation to find out whether such measures are unfairly discriminating American companies. The accusations were ignored by French authorities, who made the law effective after its approval.

The Vatican announced yesterday that Brazilian monsignor Marcos Pavan, conductor of the Sistine Chapel Pueri Cantores, will be appointed director of the world-renowned Sistine Chapel choir, after the resignation of monsignor Massimo Palombella. Palombella occupied the position for the past nine years, but renounced after accusations of fraud and embezzling money from concerts. Pope Francis had authorized an investigation on the matter last year. Pavan was born in São Paulo, and was a member of that city’s Municipal Theater Lyrical Choir.