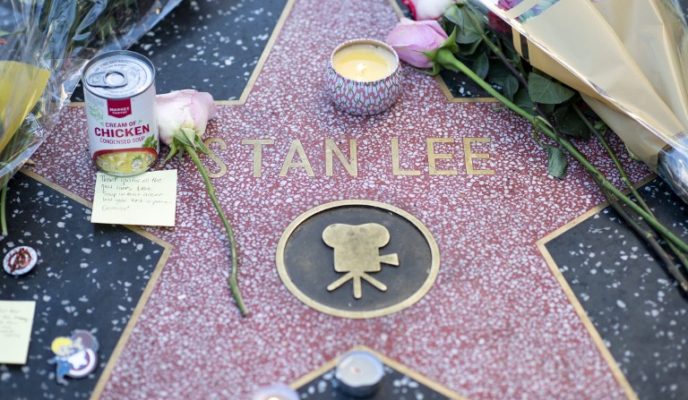 Stan Lee died Monday in Los Angeles, at age 95 – but the towering and profitable Marvel Comics legacy he birthed nearly 60 years ago will long outlive him

There was a lot more to being comics’s greatest showman ever than just showing up, convention after convention, show after show. And to the man who long wore that mantle, with great power came great adaptability.

Stan Lee – his very nom-de-toon was invented so Stanley Lieber could save his real name for novels – seemed utterly born for the role of attracting an audience. The ability to detect just what the masses wanted appeared to come as naturally to him as Peter Parker’s “Spidey sense” – a character and superpower that Lee himself co-created with Steve Ditko, who died in June.

And just like that, within five months, Spider-Man has lost both of his creative parents. Stan Lee died Monday in Los Angeles, at age 95 – but the towering and profitable Marvel Comics legacy he birthed nearly 60 years ago will long outlive him.

Shortly before World War II, Lee was an office-boy teenager at the Marvel precursor Timely Comics, trying to crack his way into the industry, hired by a relative, publisher Martin Goodman, and the company’s editor, Captain America co-creator Joe Simon.

Over the next two decades, Lee progressed from writing comics to becoming the company’s top editor. The penny-pinching company was on hard times when Goodman told Lee to create a superhero team the way the rival DC had.

Lee was tired of writing according to industry formulas and cliches, however; he had his own ideas about what made for compelling storytelling.

“I told my wife, Joanie, ‘I’m going to quit,’ ” Lee told me in his Beverly Hills office in 2011. “But she said: ‘Why not write it the way you want to write it? If it doesn’t work, the worst that’s going to happen is that they’ll fire you. And you want to quit anyway.’ ”

Lee then recounted how he eschewed the typical sidekicks and secret identities and invulnerable personas to create his bickering Fantastic Four. “I tried having heroes (Mr. Fantastic and Invisible Girl) in love and getting married,” he said. “And the teenager was a brother (the Human Torch) who didn’t particularly want to be a superhero.”

Lee paused, leaning toward me while peering through his tinted glasses, and then purred with satisfaction: “It was the turning point of my life.”

It was also the turning point of the comics industry. The Fantastic Four debuted 57 years ago this month, and Lee and his stable of remarkable talent, including the legendary Jack Kirby, spent the next years creating the X-Men and Iron Man, the Black Panther and Thor and the Incredible Hulk – a cinematic universe that would gross more than $17 billion worldwide for Marvel Studios, and billions more for such other studios as Fox and Sony.

Lee told me that the key to all this success was that he began to listen to himself – to what fascinated him about fairy tales and classic novels alike, from Grimm to “Great Expectations.” Lee was drawn to the strength we find in ourselves at the height of human frailty.

That universal appeal to our vulnerabilities – at the height of tumultuous times and generational change in the United States in the 1960s – helped Marvel’s creations become embraced and embedded in mainstream culture. And as their popularity grew, Lee grew from his duties as writer-editor to his role as promoter and ringmaster.

“He was the huckster that comics needed – he was the showman,” novelist and “Sandman” writer Neil Gaiman told me Monday. “He was also an effective writer. When you look at the (Marvel) comics by other people who weren’t Stan, you realized how efficient and effective he was.”

Part of Lee‘s promotional genius was making Marvel readers feel like a club, with such comic-book features as Stan‘s Soapbox – Lee‘s column that, in his trademark dramatic verbiage, spoke directly to readers as true “believers.” “He made you feel like part of a fantastical team, and his enthusiasm never dipped below whatever enthusiasm you would need to power a volcano,” Gaiman said.

And that high-powered passion only recently began to fade.

The first time I saw Lee in person, at Comic-Con in 2009, he was walking briskly toward a second-floor escalator at San Diego’s Convention Center. As he descended downward, dressed all in bright white and cream tones, hundreds of people began to chant his name with increasing volume: “Stan! Stan! STAN!” Lee beamed like a king, waved to his adoring throngs and then disappeared around a corner like a comic-book apparition. The buzzing fans packed in the hall were treating him like a hero whose superpower was to bend and remake an entire industry.

And then two years later, I sat with Lee in his office near Rodeo Drive. When a photographer asked for an elevated shot, Leeassumed it was he who should scale the chair; with a leopard-like spring, Lee was soon standing nine feet high, forever ready to leap into his role at 89.

For nearly a decade, whenever I emailed Lee, he would – true to his ambassador’s role – reply back within several hours, no matter the hour, no matter where he was in the world. So when he once went incommunicado for weeks, I was concerned.

Then suddenly came the humorous reply: “Mike – just had a pacemaker put in – now I AM Iron Man.”

For six decades, he was our comics Iron Man and showman. He got the credit for so much because he had a voice like no other, and the spotlight seemed to warm to him instead of the other way around.

Now, “Stan is gone and it really is the end of an era,” Gaiman said. “Ditko and Kirby and Stan – there’s this wonderful thing that Stan and the guys did in the ’60s, and it feels like it’s come to an end.

“He was the last great showman – we haven’t had one since.”

Thank you, Stan Lee, and excelsior!