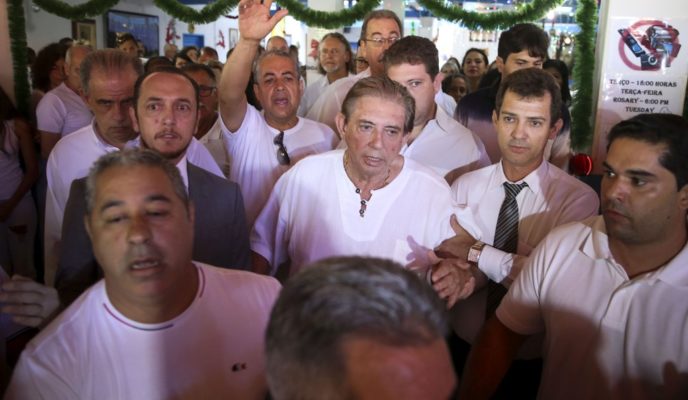 It’s not going to be an easy Christmas for either the medium João de Deus or the Italian terrorist Cesare Battisti. João de Deus, whose real name is João Teixeira de Faria, had his preventive arrest decreed by Goiás’s Justice this afternoon after being accused of sexual harassment and sexual violence by hundreds of women. Battisti, sentenced to life in prison in Italy, had his political asylum revoked by Justice Luiz Fux, who also ordered his imprisonment. At the France-Germany border, the terrorist Cherif Chekkat, suspect of the Strasbourg shooting earlier this week, wasn’t lucky enough to be arrested. The French police killed him. Back in Brazil, president Michel Temer issued a Provisional Measure (MP) that would open the currently cartelized airline industry. It may mean cheaper tickets and better services. And we conclude this year with good news for art and history lovers: Google has created an online tour of the National Museum, destroyed by a fire in September.

The Goiás State Justice has accepted the Goiás Prosecution Office’s request and has put out an arrest warrant on the famous medium João de Deus, accused of sexual harassment and sexual violence by no fewer than three hundred women. For the prosecution, the immediate arrest is needed because the spiritual leader might coerce witnesses and insist on his criminal practices. João de Deus denies all accusations. He can be arrested any time soon. His attorneys have advised him to surrender.

STF Justice Luiz Fux issued an arrest warrant for the Italian terrorist Cesare Battisti. The Federal Police are looking for him. Battisti has been living in Brazil for ten years and was granted asylum by the former president Lula. Fux’s decision revokes a 2017 injunction assuring Battisti’s freedom until a definite ruling by the STF. Battisti was sentenced to life in prison for murdering four people in Italy. So far, the terrorist’s whereabouts are unknown.

Cherif Chekkat, the suspected shooter who murdered three people in Strasbourg, was killed by the police yesterday. More than seven hundred policemen in France and Germany were looking for the suspect. Chekkat was killed at a warehouse in the neighborhood where he was last seen before the attacks. Out of jail since 2017, he had twenty-seven convictions. The Islamic State has declared that Chekkat was “a soldier.”

Slowly, Brazilian leaders seem to notice the benefits of liberalism. Yesterday, president Michel Temer issued a Provisional Measure allowing foreign airline companies to fully operate in the country. Before that, foreign companies were allowed to own up to 20 percent of the national airlines. The MP was signed amid a request for bankruptcy protection by Avianca. For Paulo Guedes, future Minister of Finance, it was a good decision, since it opens a cartelized industry.

People who couldn’t visit the National Museum before the fire that destroyed most of its collection are now able to wander online through its corridors and rooms. The virtual experience was developed thanks to the Google Street View images took before the fire. Since that fateful day in September, 1,500 artifacts have been rescued from the rubble. Besides that, the Ministry of Education has already allocated around R$15 million to rebuild the institution.