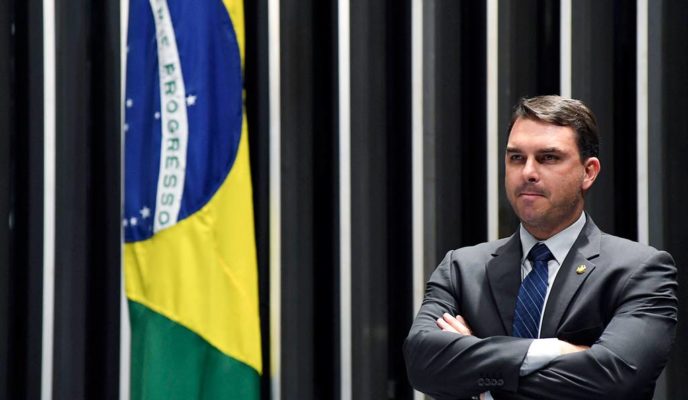 The Brazilian Federal Supreme Court will decide on whether financial controlling organs may share private data with the Federal Prosecution Office without the needs for a legal warrant, a decision which could affect hundreds of investigations, including one involving the president’s son. A PSL congressman lashed out at a piece of artwork displayed at the Federal Congress which protested police violence against black people in Brazil. In Bolivia, a clash between government forces and demonstrators who tried to force a blockade at a fuel plant left three people dead and at least thirty wounded. Two Manhattan prison guards have been charged with failing to keep watch during the alleged suicide of convicted sexual offender Jeffrey Epstein. Finally, a Brasília teacher has been fired after outraged parents found out he had been discussing anal and oral sex during classes with 10-year-old children.

STF trial decides fate of Flávio Bolsonaro and 934 other investigations

The Brazilian Federal Supreme Court will decide today whether controlling organs such as the Financial Intelligence Unit, formerly known as COAF, and the Federal Revenue Service are allowed to share detailed private data with the Federal Prosecution Office without a legal warrant. Their decision will affect 935 undergoing investigations, according to the Federal Attorney General’s office, including one involving president Jair Bolsonaro’s son, Flávio; the Rio de Janeiro senator is accused of embezzling part of the wages paid to his advisors when he was a state congressman.

PSL federal congressman Coronel Tadeu tore to pieces an artwork displayed at the Federal Congress, in Brasília, alluding to the black rights movement. Named “The Genocide of The Black Population,” the piece showed a black man wearing a Brazil national team soccer jersey killed by a police officer. In an interview, the congressman said he was shocked and upset by the drawing, and claimed it was “a disrespect to black or white policemen and good-willing citizens,” adding: “I don’t feel sorry because I have been elected by 100 thousand family members of São Paulo police officers.” The attitude was promptly criticized by other members of Congress.

Three people died and at least thirty were wounded during clashes between protesters and police forces in El Alto, Bolivia, on Tuesday. The confrontation happened at the Sentaka plant, in an operation in which Bolivian police and armed forces used armored vehicles and helicopters to unblock access to the site and prevent a fuel blockade against the capital, La Paz. After the departure of government forces supporters of former president Evo Morales’s party, Movement for Socialism, tried to break into the plant once again, tearing down one of its walls and setting it on fire. The police reacted, and a gunfight ensued.

Two federal correctional officers who were on duty on the night US businessman Jeffrey Epstein allegedly committed suicide in his prison cell in a Manhattan jail were indicted on Tuesday for failing to check on the inmate every half hour, as stipulated by the prison’s internal regulation. These are the first indictments in the criminal investigation on the death of Epstein, the billionaire who showed up dead in his cell while awaiting his trial for accusations of sex trafficking charges involving minors.

Swearwords and obscene expressions written on the board of a 6th grade classroom caused the dismissal of a Portuguese teacher in a Brasília public school. The case happened at the 104 Elementary School Center in Asa Norte. Last week, the teacher decided to discuss sexual education and proposed to his students, who range from the ages of 10 to 12, to write an essay about oral and anal sex, writing on the board several words and expressions related to the subject. Some of the children sent pictures and videos to their parents, who were outraged and took the matter to the local police.