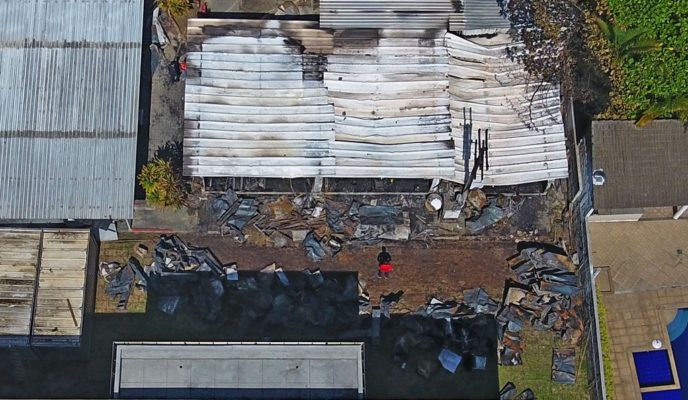 Brazil’s routine of almost daily tragedies is not for the faint-hearted. In Rio de Janeiro, ten people, among them at least nine young athletes, died after a fire in makeshift accommodations at the Flamengo training center, known as the Vulture’s Nest (Ninho do Urubu). Three more were injured. Two matches scheduled for the weekend have been postponed. In Minas Gerais, yet another tragedy involving mining dams may have been avoided. Hundreds had to be evacuated from two small towns after sirens sounded. At the Albert Einstein Hospital, in São Paulo, President Jair Bolsonaro started eating again after being diagnosed with pneumonia. Visits are restricted, though. STF Justice Gilmar Mendes is furious. According to a magazine, he and his wife are being investigated by tax auditors for corruption-related earnings. To end the week on a high note, a homeless man requested a razor blade to try to get a job and got a complete makeover in Curitiba.

Brazilian soccer mourns. Again. This morning, ten people died in a fire at the Vulture’s Nest (Ninho do Urubu), Flamengo training center in Rio de Janeiro. Three more were injured. Among the victims, at least nine were athletes from the club’s youth teams aged 14 to 16. They were boys from all over Brazil, who slept in makeshift accommodations that were being closed for renovations. Because of the tragedy, Carioca Championship matches scheduled for the weekend have been postponed.

Hundreds evacuated from two towns due to risk of dam collapses

At least five hundred people had to be evacuated earlier today in Minas Gerais after warning sirens near two dams sounded. In Barão de Cocais, the Mining National Agency decided to put the evacuation plan into action after analyses by a consulting firm found that the Vale’s dam nearby was unstable. In Itatiauçu, near Brumadinho, families were sent to hotels due to the risk of collapse of a dam owned by the mining company Arcelor Mittal.

After being diagnosed with pneumonia yesterday, President Jair Bolsonaro is fine, according to the presidential spokesperson and press office of the Planalto Palace. He also ingested meat broth. Visits, however, are restricted. According to the doctors, pneumonia is a common complication after this kind of surgery. Specialists, however, insist that, because of the president’s age, his health still requires special care. He is expected to remain in the hospital for up to seven days.

Investigated by the IRS, Justice Gilmar Mendes is furious

STF Justice Gilmar Mendes is furious. According to Veja magazine, tax auditors of the Brazilian Revenue Service are investigating him and his wife for “corruption, money laundering, concealment of assets, and influence peddling.” Because of that, Gilmar Mendes promptly sent a memo to the STF’s president, Justice Dias Toffoli, requesting “urgent measures” against the inquiry that was supposedly being carried out without any solid grounds. Toffoli has granted it.

Last Tuesday, in Curitiba, a homeless man requested a razor blade from the employees of a barber shop. He said that he was trying to get a job. Alexandre Brehmer, the owner of the barber shop, took pity on him and decided to give him a full makeover. The man, known only as Sandro, got his hair cut and his beard trimmed. He said that he would take a shower and change clothes at a gas station nearby. Nobody knows if he really got the job or even if the story was true. “It doesn’t matter. Helping others is the most important thing to do,” said the barber.