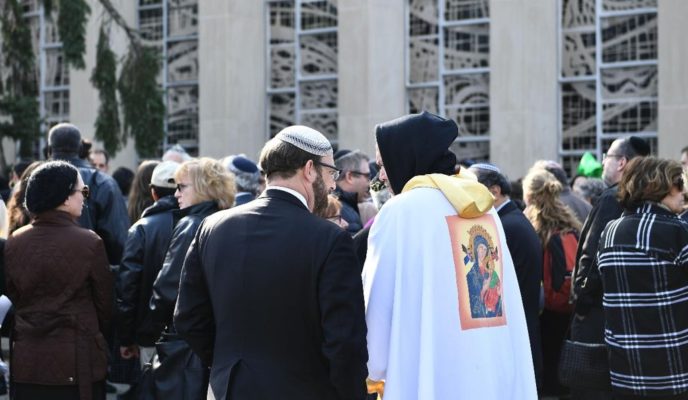 Elizabeth Midlarsky, a Jewish professor at Columbia’s Teachers College, arrived Wednesday at her office to find that it had been defaced by anti-Semitic symbols and language

The psychology professor pulled open the heavy oak doors of Horace Mann Hall, which boasts 16-foot ceilings and varnished wood floors, and headed to her fourth-floor office. Filing in behind her were students preparing for a 1:30 p.m. lab meeting Wednesday. As they entered her workspace, they passed a mezuza, a small box containing Hebrew religious texts, affixed to her doorpost.

But the sight that met them next made the professor and her students stop in their tracks.

Anti-Semitic graffiti had been spray-painted on the office walls of Elizabeth Midlarsky, a clinical psychologist and Holocaust scholar at Columbia’s Teachers College on the Upper West Side of New York. The vandalism included swastikas and an anti-Semitic slur, “Yid,” painted in bright red on the white walls of her office foyer. The outer door had been closed but not locked, one student said.

“I was shocked. I couldn’t believe it,” Midlarsky said in an interview with The Washington Post. “I’m usually not a fearful person, but they got me. I’m afraid.”

Midlarsky notified security, and she said the New York Police Department was investigating the incident. The professor said she had “no idea who was behind it.”

The episode comes amid mounting concerns about anti-Semitism, rebooted for the 21st century as memory of the Holocaust begins to fade. In February, the Anti-Defamation League reported that the number of anti-Semitic incidents was nearly 60 percent higher in 2017 than in 2016, marking the largest single-year increase on record and the second-highest number reported since the organization began collecting incident data. Meanwhile, many Americans lack basic knowledge about the Holocaust, such as the name of a single concentration camp, according to a survey released in April.

The problem is not limited to the sort of symbolism that marred the professor’s office walls. It’s been just over a month since 11 congregants were massacred in a Pittsburgh synagogue, the deadliest anti-Semitic attack in the nation’s history.

Nor is prejudice limited to the United States. One in three Europeans believe that Jews use the Holocaust to “advance their own positions or goals,” according to a CNN poll released this week.

Documenting the true legacy of the Holocaust in Jewish life has been a focus of Midlarsky’s academic work. She has applied clinical psychology to the meaning of rescue during the 20th-century genocide of European Jews and the response by survivors and their descendants. In a 2005 article, “Personality Correlates of Heroic Rescue During the Holocaust,” she asked whether certain personality traits, such as tolerance and empathy, could help explain why some people became “non‐Jewish heroes” during the Holocaust and others stood by as the Nazis pursued the Final Solution.

The vandalism uncovered Wednesday didn’t mark the first time that Midlarsky’s office has been defaced by anti-Semitic iconography. In 2007, she became the target of repeated harassment. A swastika was painted on her office door about a week after she found two anti-Semitic fliers in her mailbox at work. The same flier had appeared for the first time earlier that month.

“I think there’s a very hate-filled person who is an extreme coward,” she told the New York Sun at the time. “It makes my blood run cold.”

Around the same time, a noose was found on the office door of a black professor at the Teachers College. These incidents were condemned by leaders of the college, the nation’s first and largest graduate school of education, as hate crimes.

On Wednesday, as Midlarsky again found herself the target of anti-Semitic animus, the president of the Teachers College, Thomas Bailey, issued a statement pledging to work with police “to discover the perpetrator of this hateful act.”

“We unequivocally condemn any expression of hatred, which has no place in our society,” he said. “We are outraged and horrified by this act of aggression and use of this vile anti-Semitic symbol against a valued member of our community.”

Midlarsky attributed the graffiti to a “tremendous upsurge in anti-Semitism” but said she couldn’t understand why she had been singled out.

The experience, she said, differed from a decade ago, when she was “shocked but not surprised” to face anti-Semitic abuse. At that time, she was active in campus debates about Zionism, religious strife and the conflict in the Middle East. In particular, she was involved in protests against Iranian President Mahmoud Ahmadinejad’s speech in September 2007 at the Ivy League university.

“Back then, I was doing things that anti-Semites would hate me for, but I’ve not been so visible recently,” she said Wednesday evening.

That fact, she said, made her feel all the more vulnerable, as if her Jewish identity alone were enough to make her a target.

“I’m a Jew at this college — one of the only ones who acts like a Jew,” she added, suggesting that she doesn’t shy away from her religious identity. “My writing has to do with Jewish topics.”

After Midlarsky discovered the vandalism and called security, she waited with her students, who snapped photos and checked to see how extensive the vandalism was.