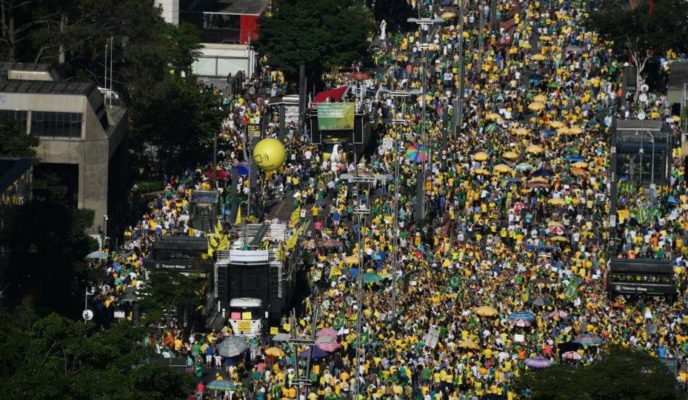 Thousands took to the streets of several Brazilian cities to show their support to former judge and current Justice and Public Safety minister Sergio Moro and president Jair Bolsonaro’s government, and to defend the approval of the social security reform. Mercosur signed a historic free trade deal with the European Union, after 20 years of negotiations. The deal may significantly benefit the economy of countries in both blocs. After signing the most expensive divorce settlement in history, MacKenzie Bezos, wife to the richest man in the world, Amazon founder Jeff Bezos, has declared she will donate half of her money to charity institutions. Iran has breached the enriched uranium stockpile limit imposed by the nuclear deal the country signed in 2015, and has imposed a deadline for European countries to present a solution to its demands before it resumes its nuclear weapons program. Finally, Central American immigrants fleeing poverty and violence in their countries are increasingly choosing Europe over the United States, due to US president Donald Trump’s harsh immigration policies.

After alleged conversations attributed to Justice and Public Safety minister Sergio Moro and members of the Operation Car Wash taskforce, thousands took to the streets on Sunday in several Brazilian state capitals to show their support to the operation, as well as the former federal judge. The demonstrators also took the opportunity to defend the approval of the social security reform and support president Jair Bolsonaro, who, along with Moro, used their social media accounts to show their gratitude. Several politicians and members of Bolsonaro’s cabinet attended the rallies, as well as music and TV celebrities.

After negotiations which began in 1999, and several delays and interruptions, the long-awaited EU-Mercosur Association Agreement concluded on June 28th in Brussels was signed by representatives of both blocs. The feat rewarded the efforts of president Jair Bolsonaro’s administration (as well as Michel Temer, who resumed the negotiations) in further increasing Brazil’s openness to the foreign market, and Mercosur’s reconfiguration as a propeller of regional development. The deal is expected to increase internal labor productivity and the competitiveness of all nations involved, increasing the flow of investments and products between them and making them more accessible to consumers.

Most expensive divorce in history will pour money into philanthropy

This week the divorce of the richest man in the world, Amazon founder and main shareholder Jeff Bezos, whose fortune is estimated at US$ 315 billion, will be made official. Married to Bezos for 23 years, before he started his company in a garage in Seattle, writer MacKenzie Bezos will pocket 4 percent of Amazon shares; she is entitled to US$ 38 billion and has already said she will donate half of it charity. “In addition to whatever assets life has nurtured in me I have a disproportionate amount of money to share. My approach to philanthropy will continue to be thoughtful. It will take time and effort and care. But I won’t wait. And I will keep at it until the safe is empty,” she wrote in a letter posted by Jeff Bezos in a tweet in which he congratulated her.

Iran has breached the limit imposed on its low-enriched uranium stockpile by the nuclear deal it signed in 2015 with several world powers, according to international inspectors. Two Iranian news agencies and Foreign Minister Mohammad Javad Zarif confirmed the information, putting pressure on European nations who are trying to save the deal until the July 7th deadline imposed by the Iranian government to begin raising its uranium enrichment closer to weapons-grade levels. The nation’s stockpile exceeded the 300 kilos of 3.67 percent enriched uranium which had been set as a limit; the Islamic Republic claims it will violate some clauses of the deal due to what they perceive as a lack of progress concerning economic benefits promised by the other signatories.

Instead of trying to cross into the US, Central American immigrants are now heading for Europe

Instead of following the path of many of their countrymen and trying to enter the United States in order to obtain asylum there, many immigrants fleeing poverty and violence in Central American countries are attempting more and more to cross the Atlantic in order to reach Europe. Their decision is caused mainly by US president Donald Trump’s increasingly tougher immigration policies. The number of asylum applicants in Europe has risen by 4,000 percent in the last decade. Spain is the first choice of many immigrants, due to the common language and a network already in place of friends and family members working in that country’s informal economy.