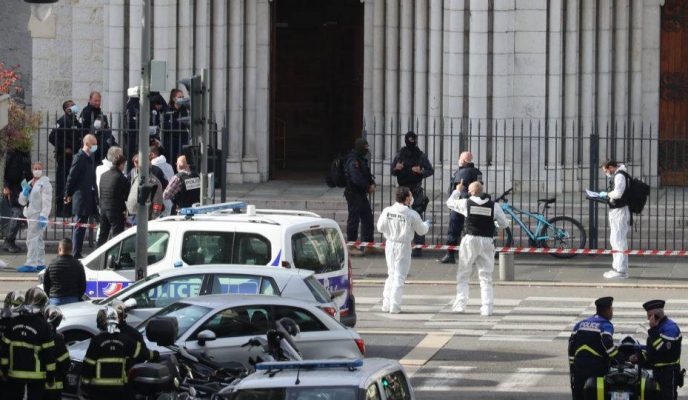 An Islamic terrorist attack in the Southern city of Nice has killed three people inside a church. One of the victims was beheaded by the criminal, while another has been identified as a Brazilian national. A study made by Brazil’s Radio and Television Broadcasting Association established that the amount spent in this year’s elections TV airtime may cost the equivalent of 5.7 thousand intensive care beds destined to COVID-19 victims. Meanwhile, Brazilian president Jair Bolsonaro has spent over R$ 2 million in two months, amidst a pandemic which is wrecking the country’s economy.  Economy minister Paulo Guedes has said that the recently-issued R$ 200 banknote, which features a maned wolf, and the R$ 100 bill, may cease to be used in a near future. Finally, scientists are warning against the possibility of a new novel coronavirus strain, allegedly identified after people returned from trips to Spain and southern European countries.

Three people were killed during a stabbing spree inside the Notre Dame Basilica, in the southern French city of Nice. Among the victims, an elderly woman praying on the site was beheaded in what was described by the city’s mayor, Christian Estrosi, as an act of “Islamofascism”. A 44-year-old Brazilian, identified by the Brazilian Foreign Office as Simone Barreto Silva, was stabbed outside the church. The suspect, a 20-year-old who was shot by local police officers, has been detained and taken to a local hospital, where he called himself “Brahim” and said he was acting alone. A murder investigation has been started by France’s antiterrorism authorities, especially given the suspect was heard screaming “Allahu Akbar”, which means “God is the greatest” in Arabic, before being arrested. Several world leaders, such as United States president Donald Trump, have expressed their solidarity towards France, while French president Emmanuel Macron announced the deployment of soldiers in the streets in order to counter such terrorist attacks.

In every even year, every voting-age Brazilian citizen is summoned to take part in the so-called “democracy party”, the local and major elections held country-wide. The invitation for this party is well-known: the series of taxpayer-funded political ads broadcast on all public radio and TV stations twice a day. And, as in every party, it is up to someone to pay up the bill – which, in this case, may reach R$ 800 million. According to the president of Brazil’s Radio and Television Broadcasting Stations Association, this model is outdated and should be reviewed. He put an effort in order to avoid the taxpayer-funded mandatory broadcasting of political ads last year, and claims that there is a legislative bill trying to change Brazil’s elective legislation in order to make it similar to the one adopted by the United States.

After nearly four months maintaining his monthly spending around R$ 200 thousand, the so-called “secret” spending bills made by Brazilian president Jair Bolsonaro with his corporate card have been disclosed as totaling R$ 2.1 million during the months of August and September. The government claims such expenses are supposed to be secret, due to the personal safety of the president, but the fact is that during the first nine months of this year Bolsonaro’s credit card expenses have amounted to R$ 6 million, even though several foreign trips have been canceled due to the novel coronavirus pandemic.

Brazil’s Economy minister, Paulo Guedes, said this Thursday that the R$ 100 and the recently-released R$ 200 banknotes may cease to be used in a near future. “We have created a banknote with the picture of a maned wolf due to a logistical problem, we had to pay the COVID-19-related emergency aid”, he said. During a public hearing at the National Congress to follow up on measures being taken by the government to fight the pandemic, he added that since new money transfer implementations were set up by the country’s banking system, “the maned wolf will have a short career”.

Scientists warn of a new coronavirus variant spreading across Europe

Initially discovered among agricultural workers in northeastern Spain in June, a new alleged strain of the novel coronavirus is being blamed for the new COVID-19 wave which has been hitting the continent after earlier quarantine and lockdown measures failed to restrain the spread of the disease. The information has been published by ETH Zürich researchers, in a study which is yet to be peer-approved, and has even received a name: 20A.EU1. According to the research, people who spent their summer vacations in Spain and came back to their countries had a fundamental role in re-spreading the virus all over Europe, which is already suspected of reaching even Hong Kong and New Zealand.