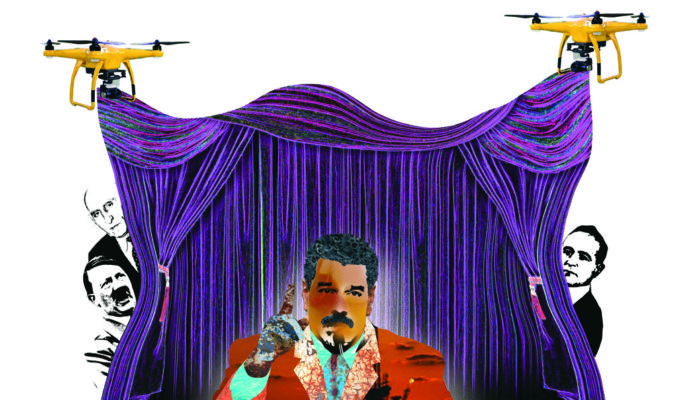 Did dictator Nicolás Maduro stage an attack against his own life in order to justify more oppression against his opposition? The doubts surrounding Venezuela have also occurred in the past, in countries like Germany, Brazil, and Iran

Many doubts still surround the supposed attempted attack on the Venezuelan dictator Nicolás Maduro on August 4 in Caracas, during a military parade. The only certainty about the case is that Maduro, the leader of one of the most controversial governments in history, will be using it to his favor.

“It is a very obscure episode, and it is unlikely that we will ever know what happened or who did it. Whatever the truth about the affair, it will never come to light”, said professor Andrea Oelsner, from the San Andrés University (Argentina).

She sees three possibilities of explanations in the case:  that it was committed by the government itself; by the opposition (including the military, or a group made up by military and civilian people) or that it was organized outside Venezuela, with local allies. “In any case, in Venezuela, 98% of common crimes are not solved, and this one will not be solved as well.”

Maduro already chose his alternative: he blamed the opposition, former Colombian president Juan Manuel Santos, and the Americans, and already set in motion the repressive apparatus, arresting deputy Juan Requesens, que confessed (or was compelled to confess) his role in the episode.

One this is right, stresses the Argentinian teacher: “(Maduro’s) government needs to distract the population from issues they can’t hide, such as their failure in every aspect – political, economic, social, health and education.” One of the clearer scenarios lies in the economic field: the country has reached the fifth following year with no growth, its GDP has been shrinking 47% since 2013 and the inflation, according to the International Monetary Fund (IMF) should reach 1,000,000%.

“It it was orchestrated by the government we will never know, because it will be hidden”, says her.

The tactic has already been used a few times in history to strengthen in power certain leaders or to undermine governments. In February 1933, the Reichstag, building which houses the German parliament, was set on fire. The fire was attributed to Dutch stonemason Marinus van der Lubbe, a communist agitator; it was the cue chancellor Adolf Hitler, who had come to office on the previous month, needed to ensure he had more power. Rights guaranteed by the 1919 German constitution were suspended, which allowed the imprisonment of communists and the rise of police actions in the country.

Another political maneuver happened in 1937 in Brazil, with the Cohen Plan. According to Getúlio Vargas Foundation’s Center for Research and Documentation of the Contemporary History of Brazil (CPDOC, Centro de Pesquisa e Documentação de História Contemporânea do Brasil ), the strategy consisted on the dissemination, in 1937, of a document attributed to the Communist International, which contained a supposed plot to seize power by the communists. Years later, it was proved that the document was forged by the government in order to justify the implementation of the Estado Novo dictatorship, in 1937. The plot’s mastermind was captain Olímpio Mourão Filho, then head of the Brazilian Integralist Action’s secret service.

In Iran, in August 1953, Iranian military officers – allied of shah Reza Pahlavi, who had left the country after an attempted coup against Mohammad Mosaddegh, infiltrated Tudeh, the Iranian Communist Party, in order to organize a “communist revolution”. It resulted in companies looted, shops sacked and widespread vandalism throughout the commercial neighborhoods of Teheran, Iran’s capital. This social convulsion was the cue for general Faziollah Zahedi, an ally of the shah, to unleash the repression, and the result was Mosaddegh’s downfall. The CIA supported the Iranian military, and Allen Dulles, director of the American intelligence service, accompanied the shah during his return from exile.

READ IT IN PORTUGUESE: Três complôs que mudaram a história